Posted on July 31, 2015 by gardinerfamilyadventures

Now it was Jamie’s turn to enjoy (hopefully) some single track. Out plan was to enjoy a mixture of pavement, easy dirt roads, and easy and intermediate single track. Things don’t always go according to plan.

We parked at a pull-out part way up Diamond Fork Canyon Road and rode the pavement up to Sawmill Hollow. We stopped briefly at Three Forks to find the trailhead for Cottonwood Creek, which leads up to Second Water. We verified that there is no room for vehicles with a trailer. 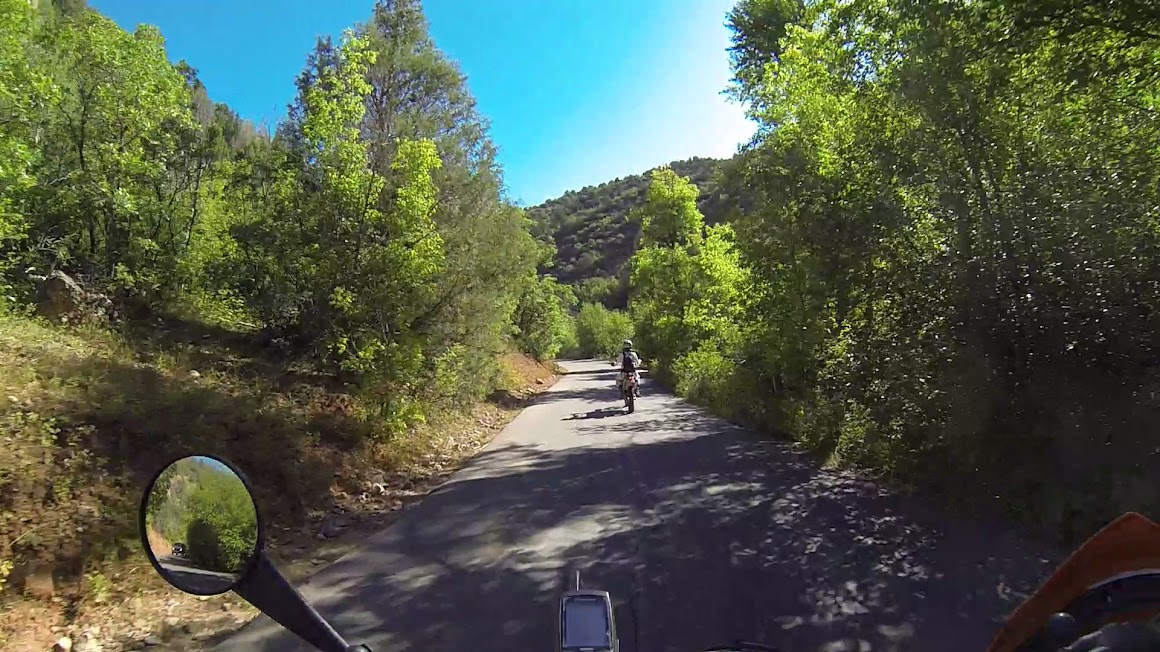 The ride up to Sawmill was very pleasant. The road is paved, but it is a small and twisty road. You could definitely smell the sulfur from the nearby hot springs. 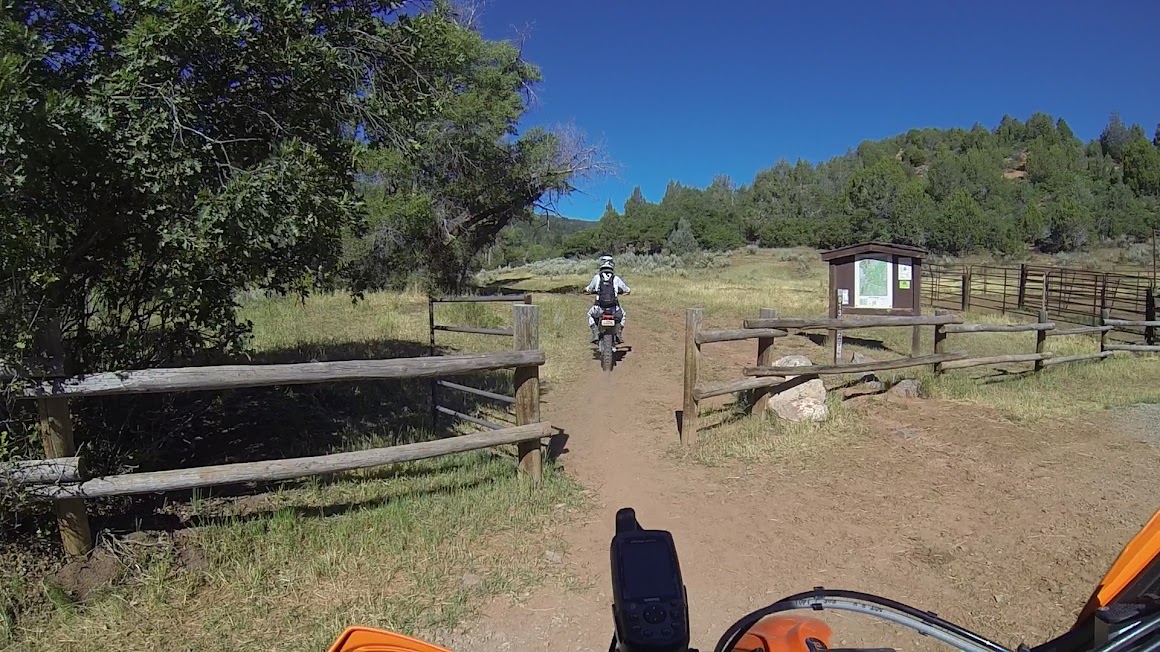 A few months ago I rode the single track at Sawmill Hollow both directions. I felt that it was easier riding up than down, so we thought we would give it a try. Our goal was to reach Packard Canyon, which is a fun and easy single track that I was sure Jamie would like.

The first part of Sawmill Hollow is very nice as the trail works its way up a small valley. But then you come to the first semi-rocky and steep climb. Jamie almost made it up, but stalled her bike and began rolling backwards down the hill. Luckily she was able to lean the bike into the hill and stop rather than slide to the downhill side.

I parked my bike and helped her walk the bike back down. I asked if she wanted to turn back, but she was willing to press on if I would ride her bike up this section. At my weight it was a challenge to get up the hill on her 250. It doesn’t have nearly the power that my 350 does. I then learned that she had the map switch set to “mild”, which really tames down the bike. I suspect she may have made the climb if she had it set to “wild”, and I think it would have been much easier for me. 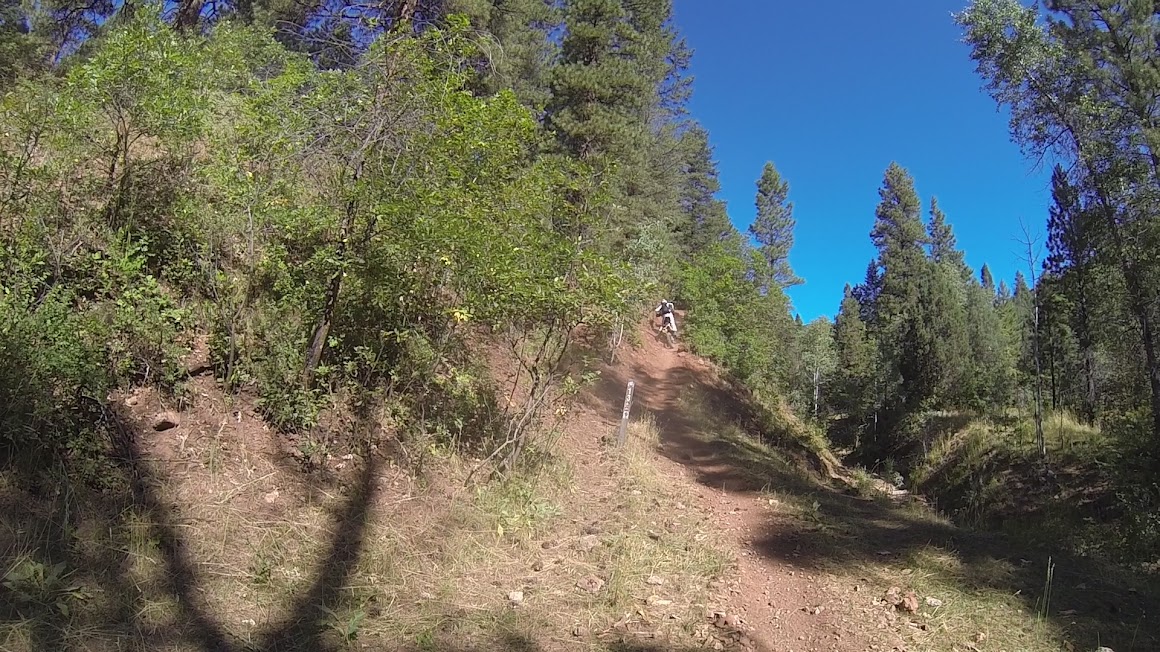 Most of the trail is pretty nice, but it does have a fair number of really steep climbs, exposed tree roots, and gully crossings. At each obstacle I asked if she wanted to turn back, but she was always game to press on. 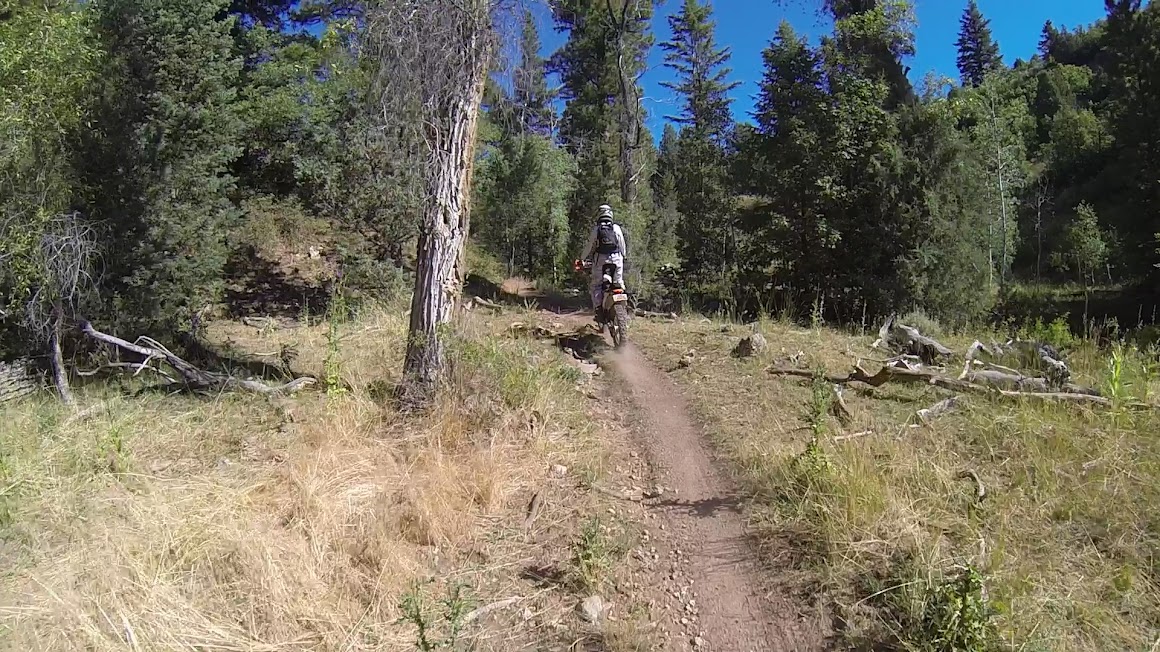 I think she only got stuck on one step-up tree root (in the photo). I coached her a bit on how to rebuild momentum and gain traction. After a few attempts she made it up fine. I think I got stuck twice, so Jamie did really well. 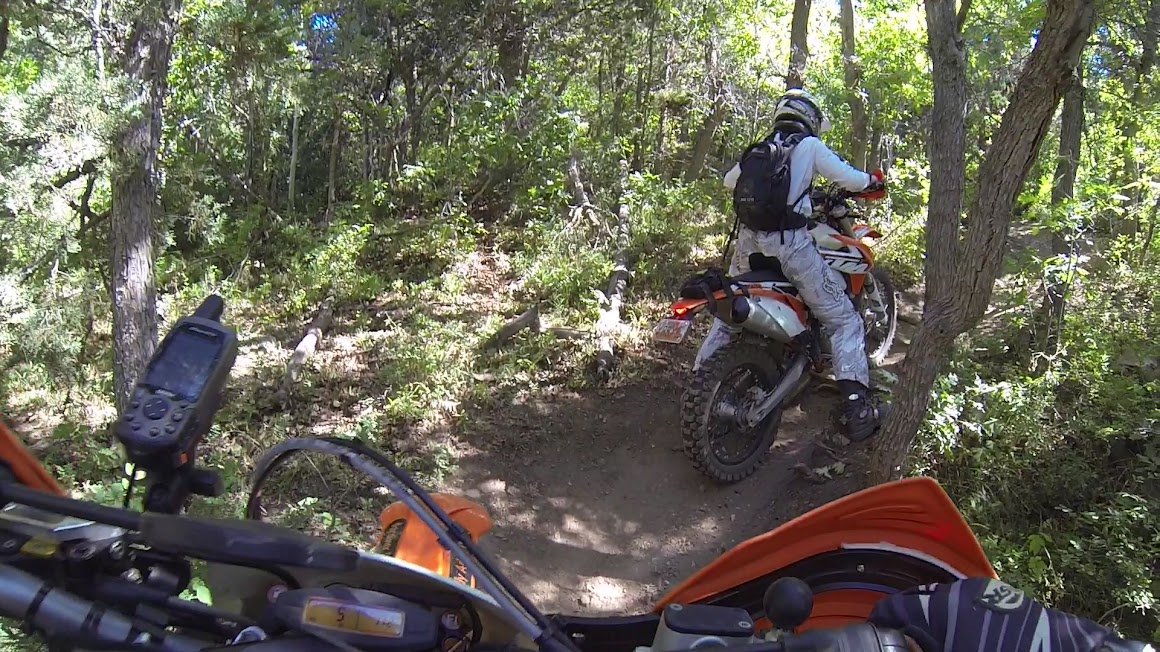 Stuck on a tree root

Some of the climbs are quite long, but for the most part the long ones aren’t very technical. With her map switch set to “wild” she made all of the rest of the climbs without problem. 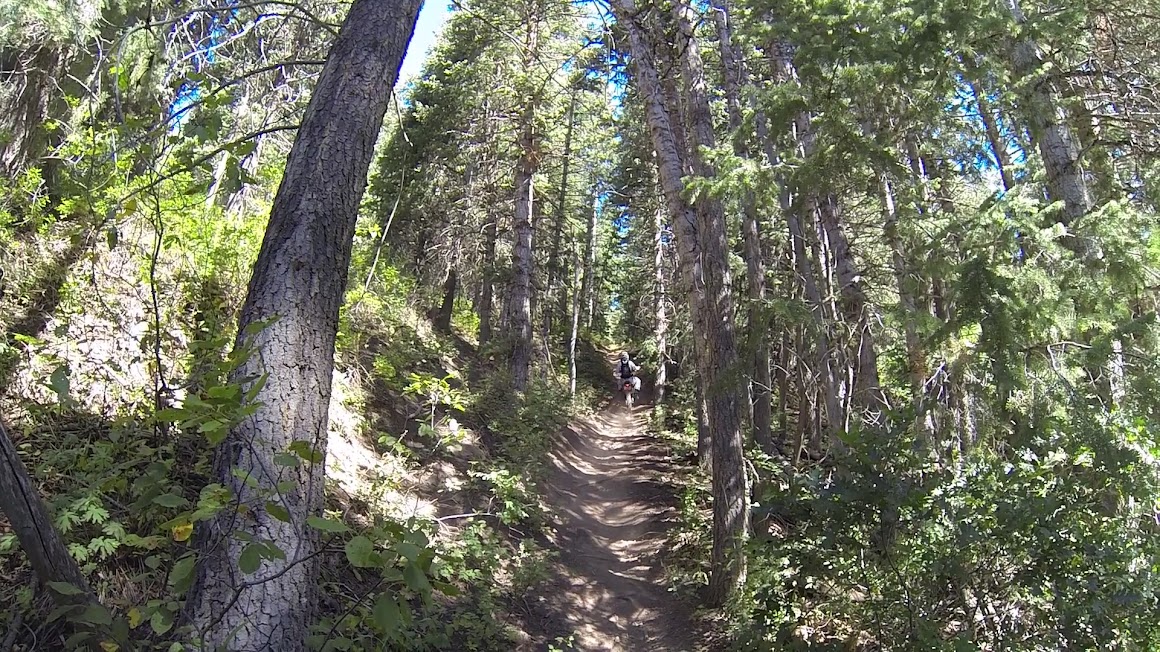 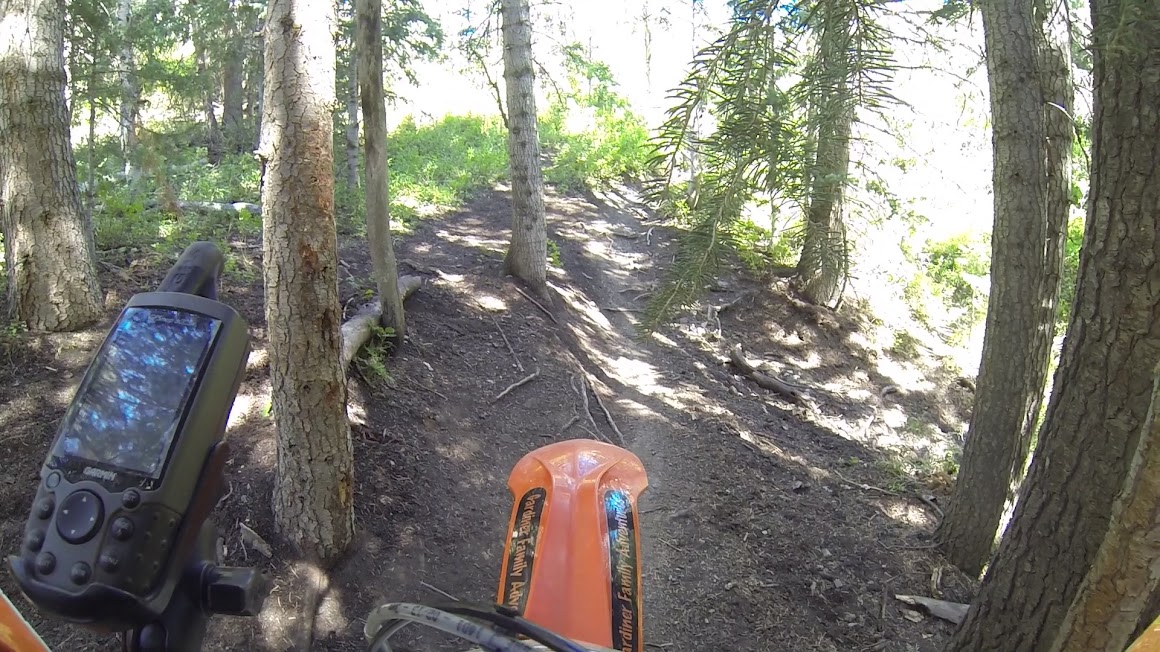 Once we got to the top of Sawmill the trail follows the ridgeline towards Hobble Creek Canyon. This section of trail has a mixture of easy flowing single track through the meadows, short rocky stretches, and tight twisting turns through oak brush. There are also a few more steep climbs to make. 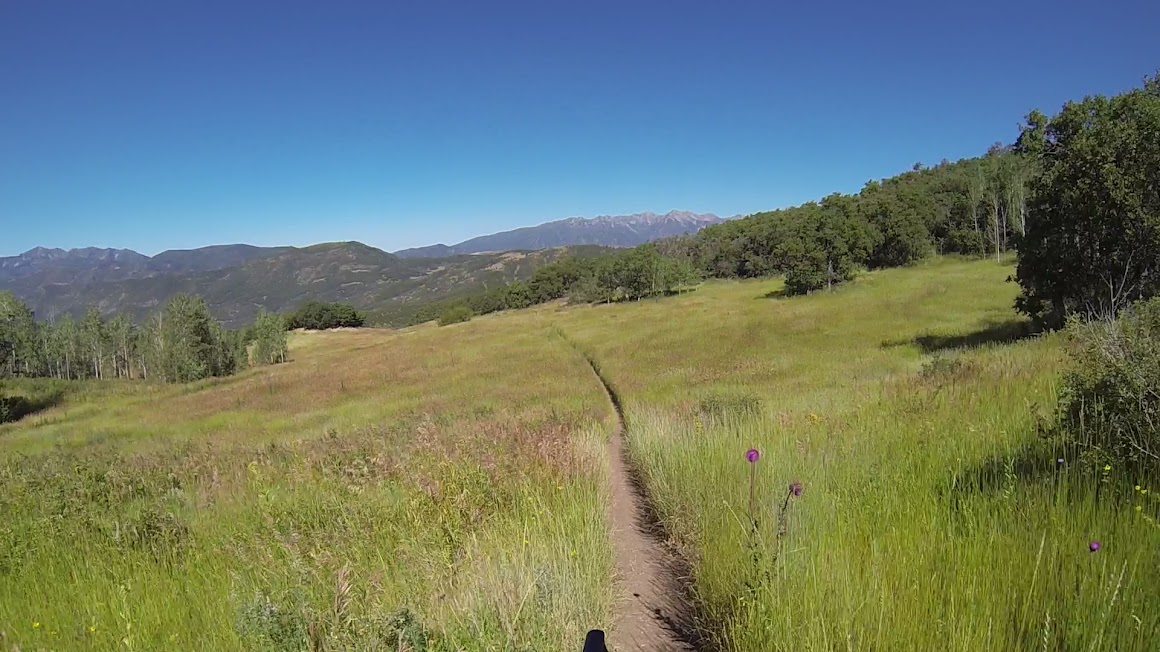 And there are a few steep and loose descents. 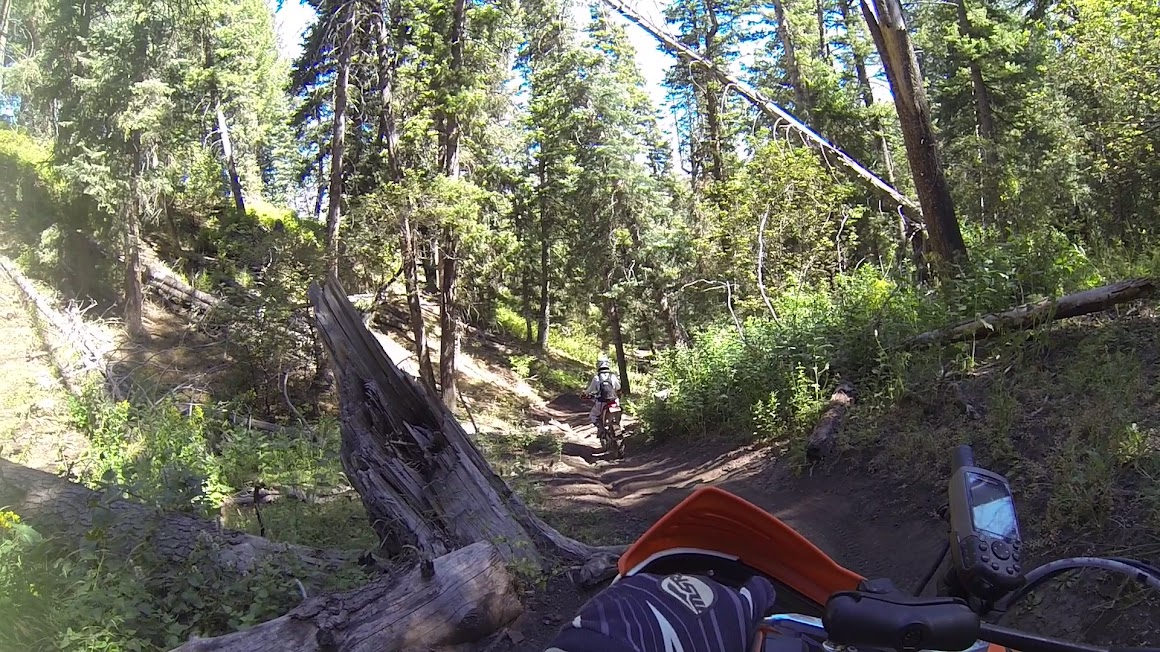 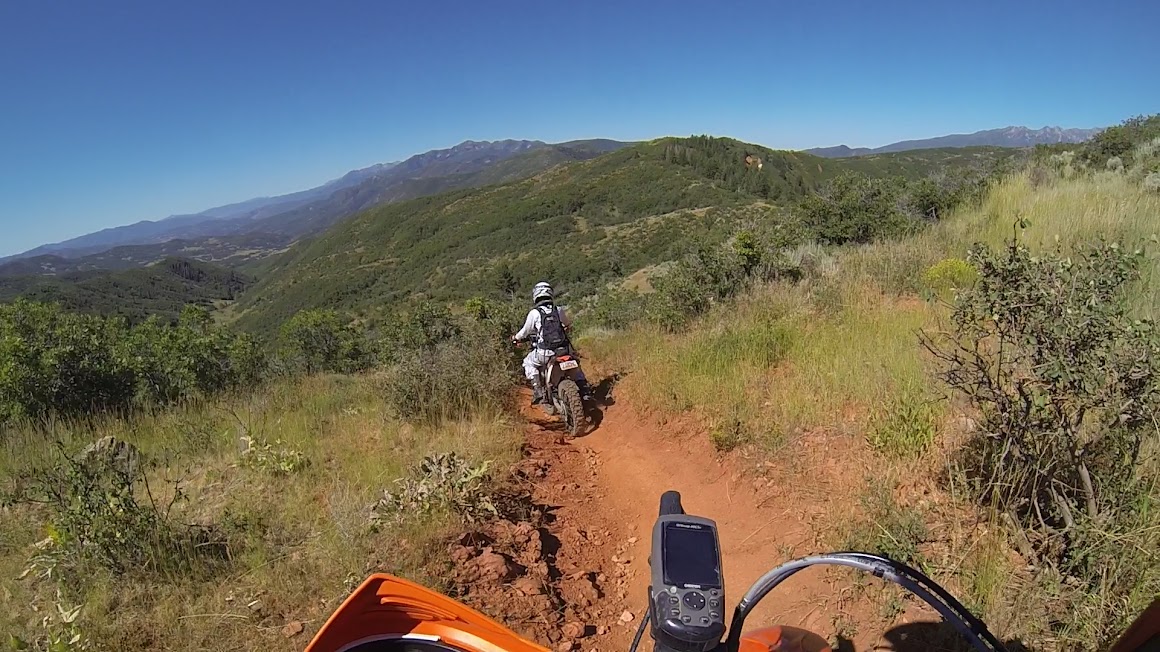 In the more open areas there are great views of the mountains and Utah Valley. 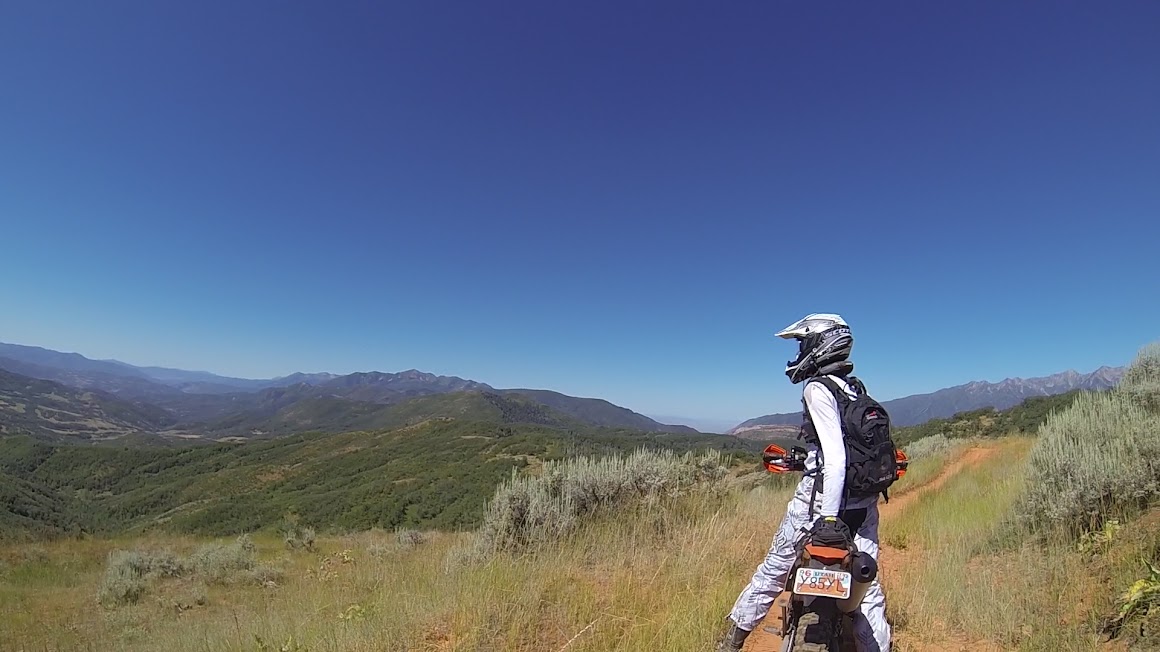 Packard Canyon has a fork in the trail. On my last visit, I rode up and down the western leg. It was really nice except for one semi-rocky stretch. Ross rode the eastern leg and thought it was a nicer trail.

The trail starts off with a very steep descent. The dirt was loose and dry, so it was difficult to control our speed and not start into a skid. We both made it down okay and there were no obstacles along the way, so it really wasn’t as bad as we thought it might be. 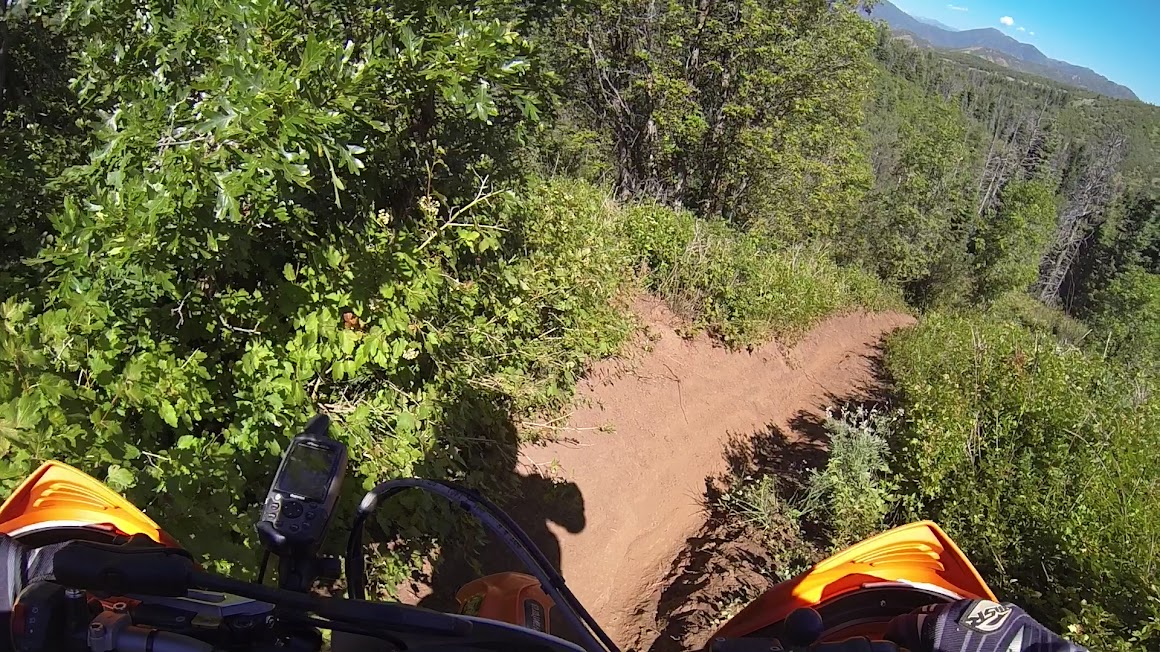 At the bottom of the steep section the trail goes through an overgrown meadow. It was difficult to see the trail and some of the weeds were over Jamie’s head. The trail was narrow, but we didn’t find any rocks or logs hiding the weeds, so it was a fun ride. 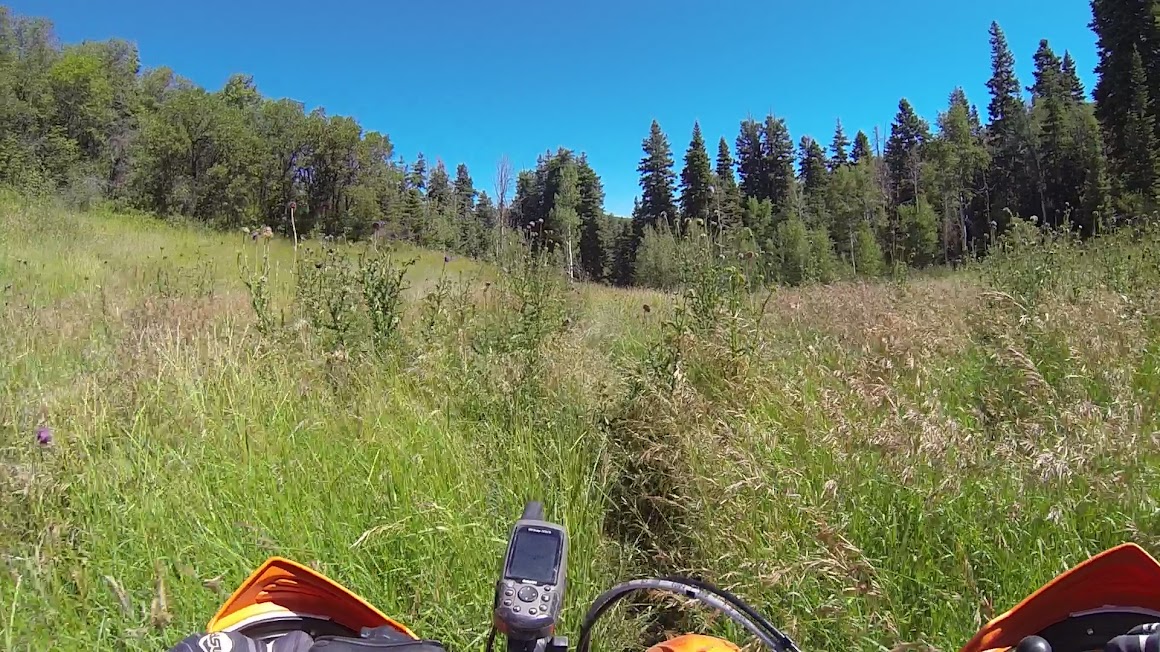 The trail is very overgrown

The trail finally opened up a bit and made for an enjoyable ride. 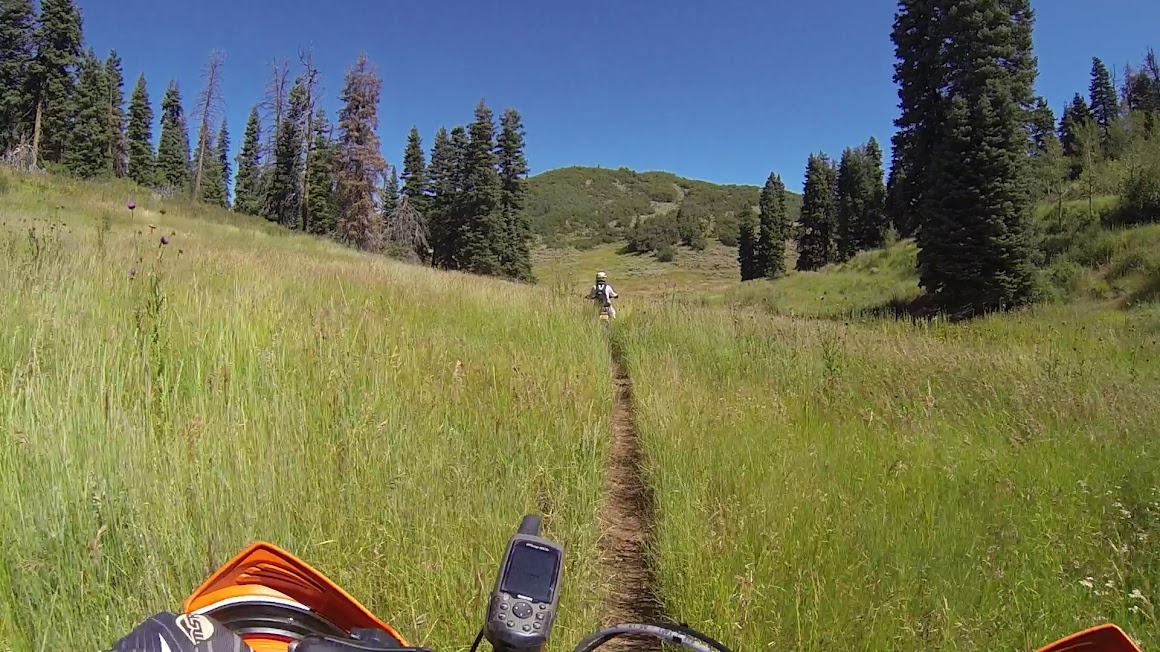 Some of the weeds were over Jamie’s head

But then the trail vanished in one of those terraced meadows. There were faint tracks going off in different directions, but it was not clear where the real trail went. I went in front to try and find it. I finally found a trail and started following it and called for Jamie to follow. My trail turned out to be a cow trail that led to a water retention pond. Jamie thought she was on the same trail as me, but she actually found the real trail. We eventually joined back up and continued on our way. 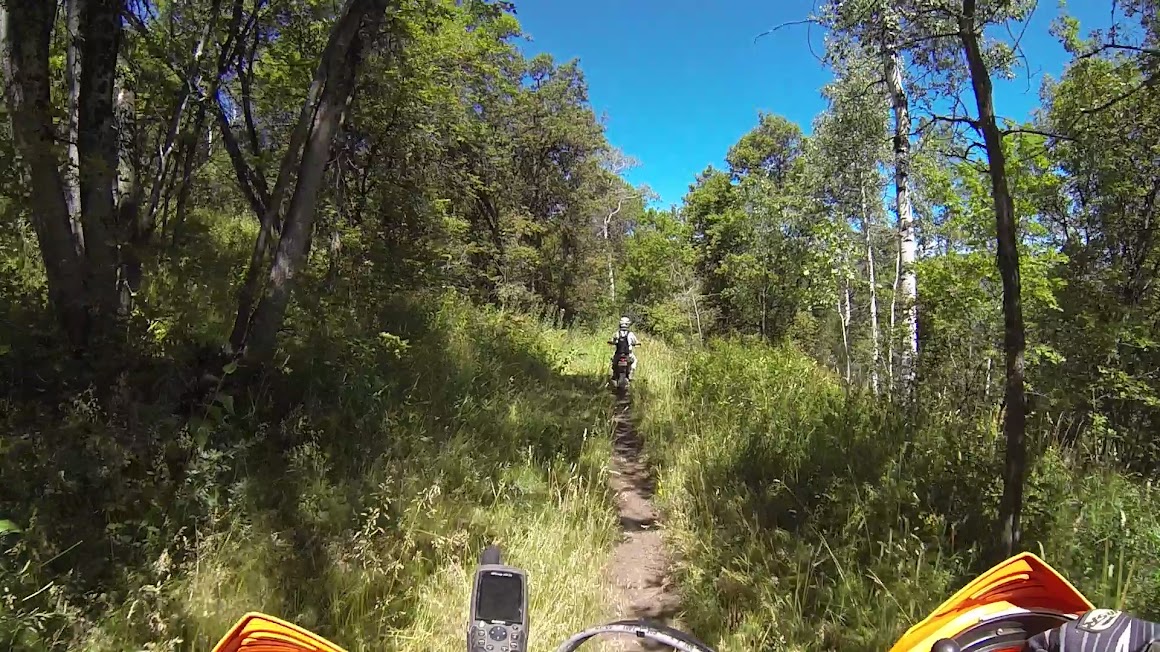 Beyond this point the Packard Canyon trail was really fun. As hoped, Jamie really enjoyed it. I hope she felt it was worth the dues she paid to get up Sawmill so we could enjoy this ride.

We eventually made it to the Hobble Creek Road and rode up to the east and dropped back over into Diamond Fork Canyon. We stopped for lunch near the Diamond Fork Guard Station. After lunch we rode back down the pavement towards the car.

We also found the staging area for the famous Monk’s Hollow ATV trail. I have wondered about this trail for years, so we decided to check it out. We rode the first few miles of the trail to get the sense of it. It is a nice ATV trail so we want to come back with my wife so she can enjoy the ride.