Posted on July 30, 2015 by gardinerfamilyadventures

A few years ago Jamie and Jason had a bad experience on some narrow single track trails with a lot of steep side hill exposure. I am trying to help them learn that single track can be fun, so I planned some rides that would hopefully be a good experience for them.

They were not able to go riding the same day, so I planned two outings. I decided to take Jason on some segments of Center Trail (#009) in Diamond Fork Canyon. These are some of my favorite trails. I planned a route that skipped the hardest sections, but included the easy and intermediate sections.

Jason hadn’t ridden single track in over two years, so he was a little rusty. He picked it up quickly and set a pretty quick pace right off the bat. Bob Dawson was able to join us. He elected to ride sweep, so he didn’t get in much of the video.

By skipping the harder sections, we had time to ride the northern most segment of Center Trail, which I had never ridden before. It took longer than expected, so we ended up taking the main roads back to the car to be home for our family 24th of July BBQ.

Here is our GPS track – just over a 50 mile loop, about half of which was single track.

We parked at the Unicorn staging area where a dirt road leaves Ray’s Valley Road and heads over to Strawberry Reservoir. Being a holiday, I was surprised that we were the only ones in the staging area. In fact, we saw very few people all day.

The southern end of Center trail starts about 5.5 miles from Unicorn along the dirt road. This is near the crossing of First Water drainage. The following map shows more detail of the southern end of our loop. Purple routes are paved, green are easy, blue intermediate, red advanced, and black is extreme.

The southern half of the loop

The southern leg is by far the easiest segment of Center Trail. We let Jason lead, and he took off at a good clip. It was a bit of a challenge to stay up with him as I was filming. We rode the entire leg non-stop, taking roughly 7 minutes. 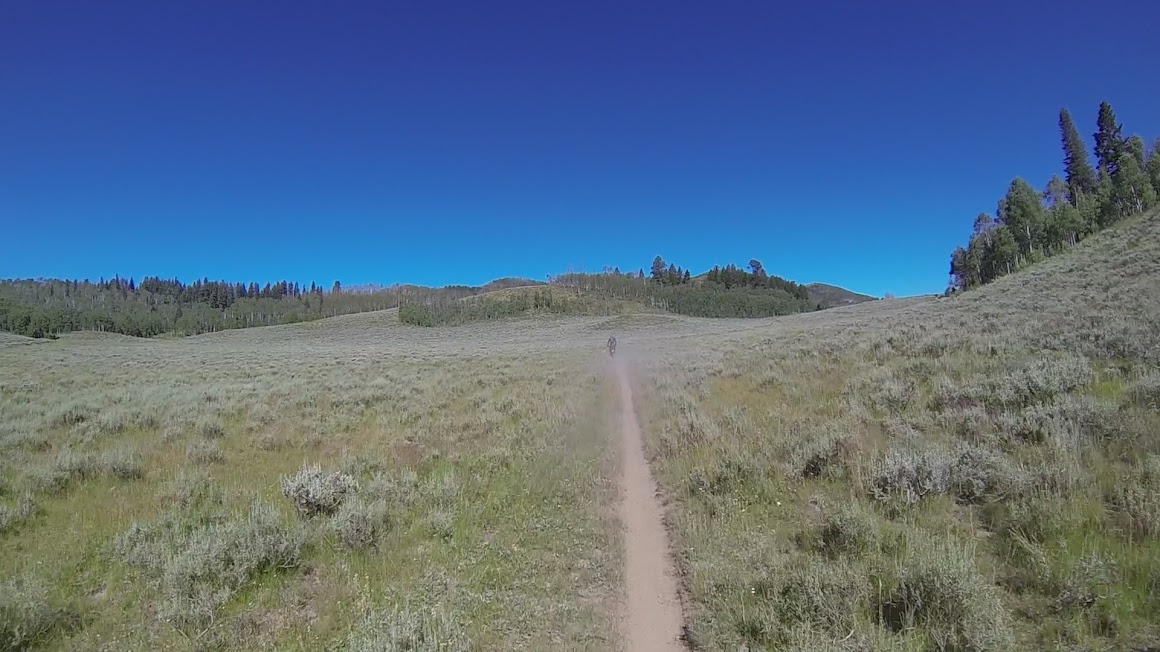 The easy part of Center Trail 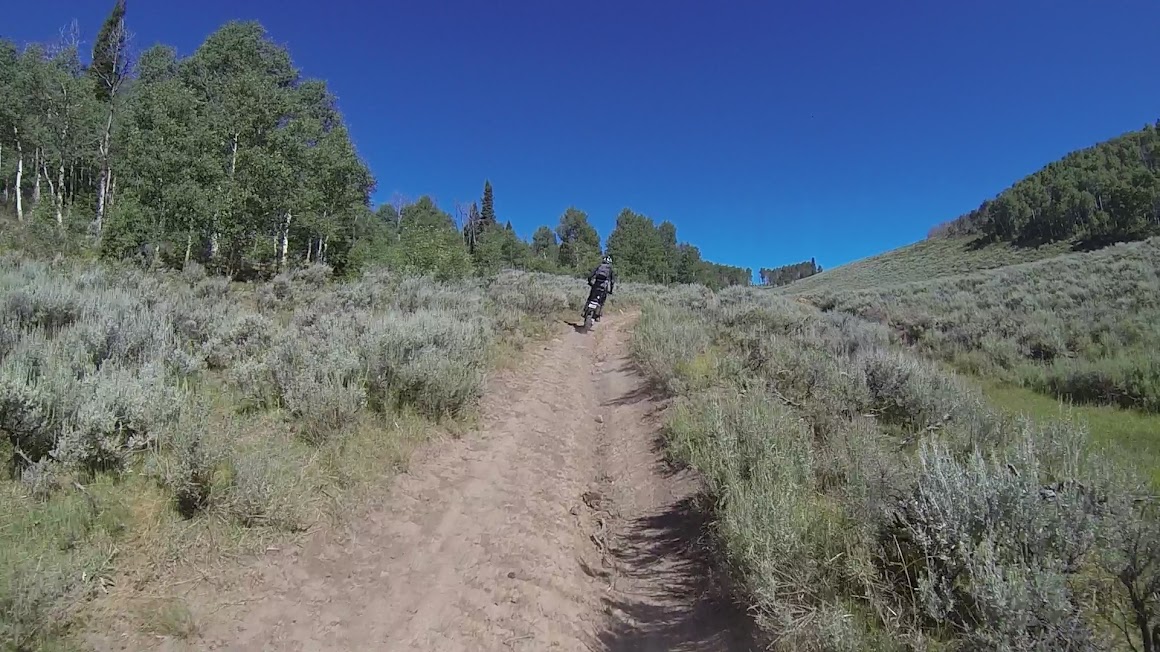 In my opinion, the segment between Second Water and Third Water Ridge is the hardest section – especially riding south-to-north. So, we skipped that section and took Strawberry Ridge to a dirt road going down Third Water Ridge. 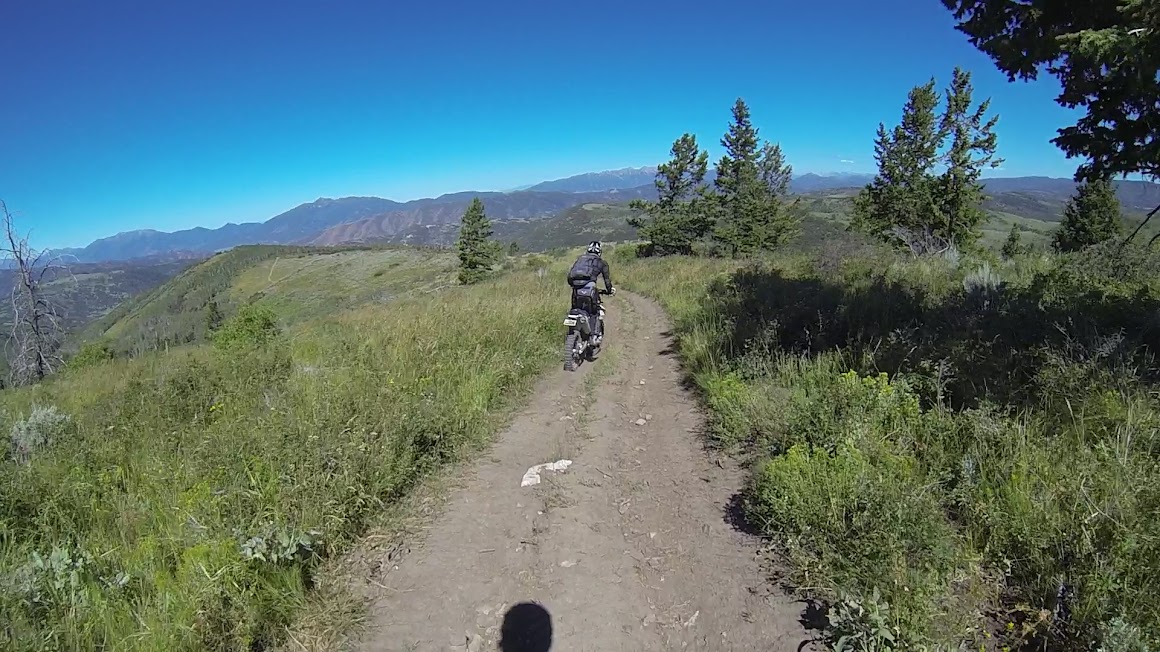 Most of the trail from Third Water Ridge to Fifth Water is really nice, but there are a few rocky stretches and one pretty long and steep downhill. Jason was riding very cautiously on the downhills, but seemed very comfortable on the flat and uphill sections. He dabbed his feet a few times on the downhills, but he never experienced any significant difficulty. 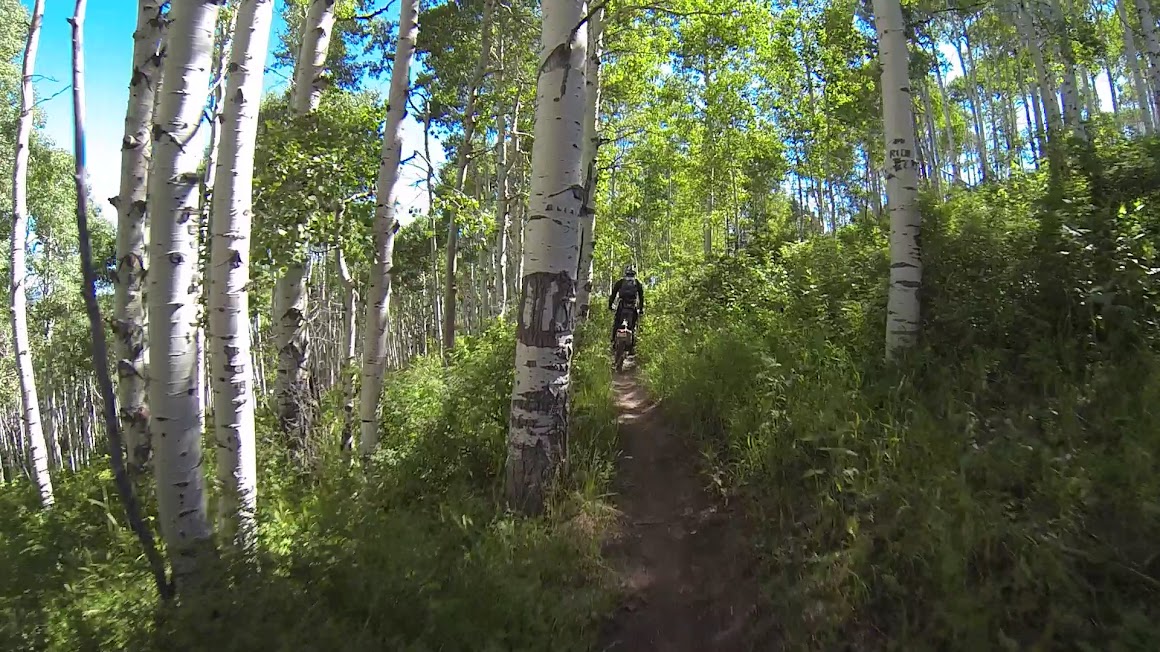 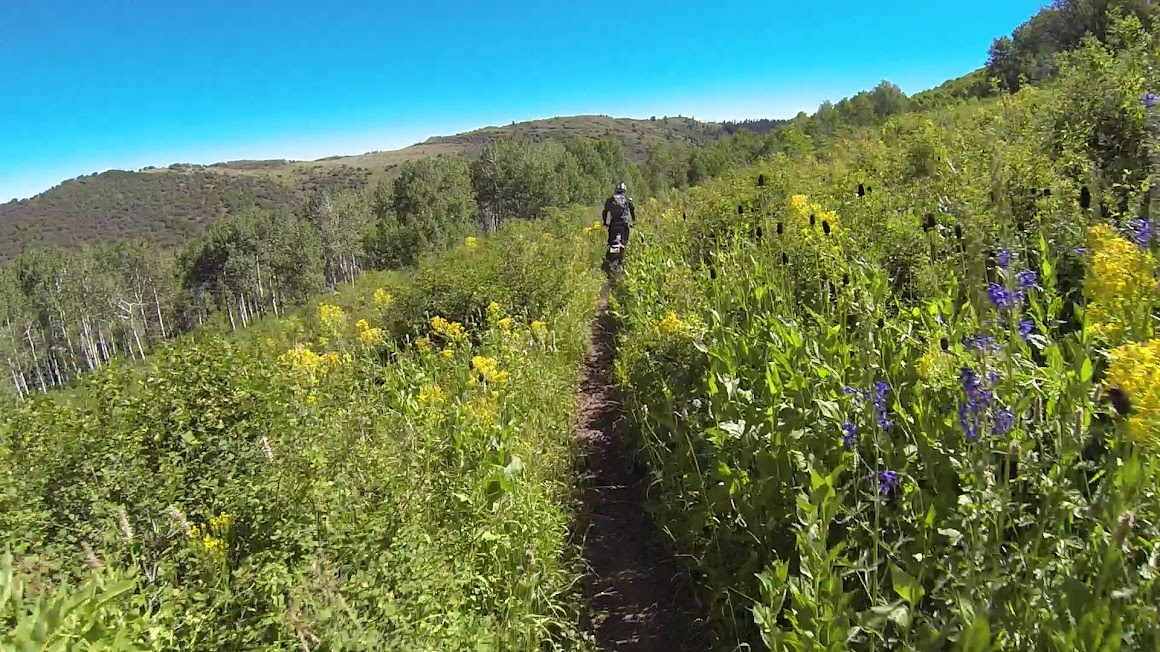 Many years ago my oldest son and I accidentally discovered the Fifth Water trail (#015) and it has always been one of my favorite trails. I hadn’t ridden up this trail in quite some time, so we decided to ride up to the top of Horse Creek on Strawberry Ridge and enjoy the view overlooking Strawberry Reservoir. 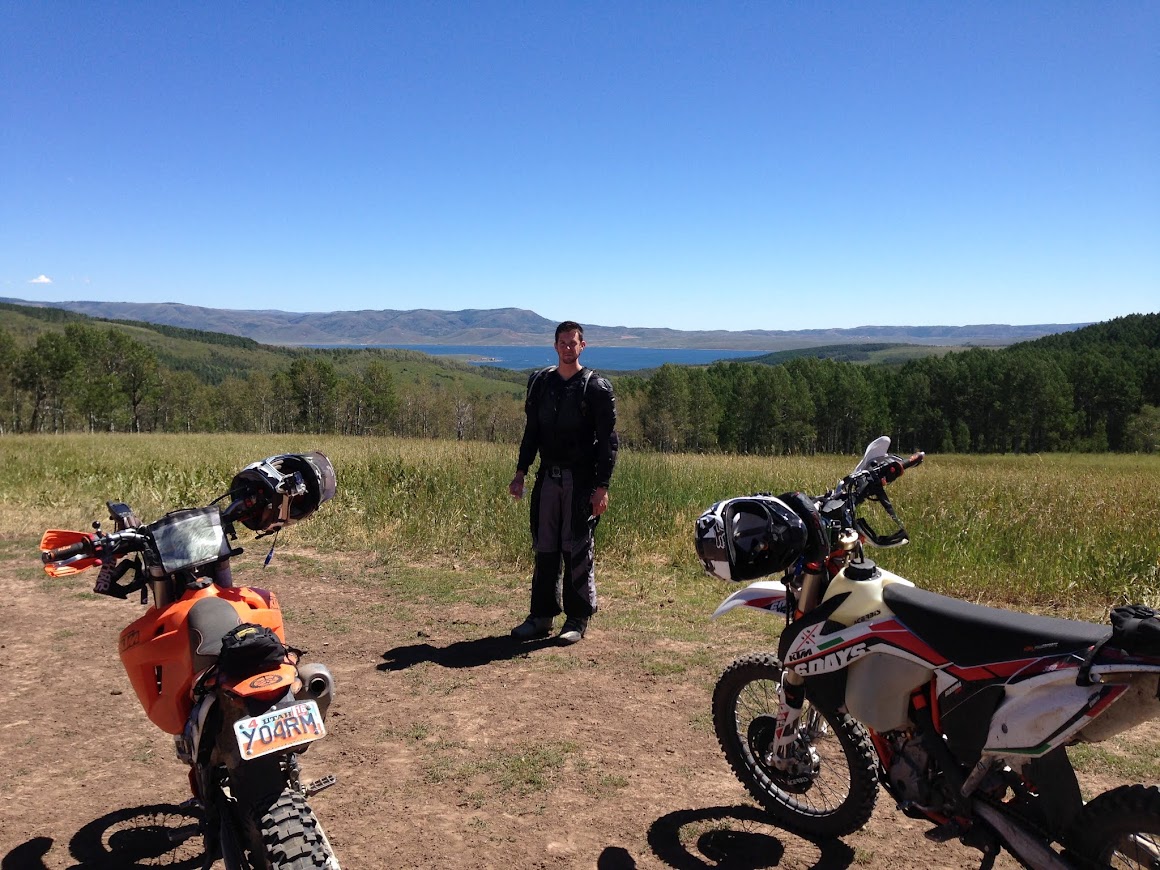 After a brief rest, we rode down Fifth Water Ridge (#014) back to Center Trail and continued north to Sixth Water.

The northern half of the loop 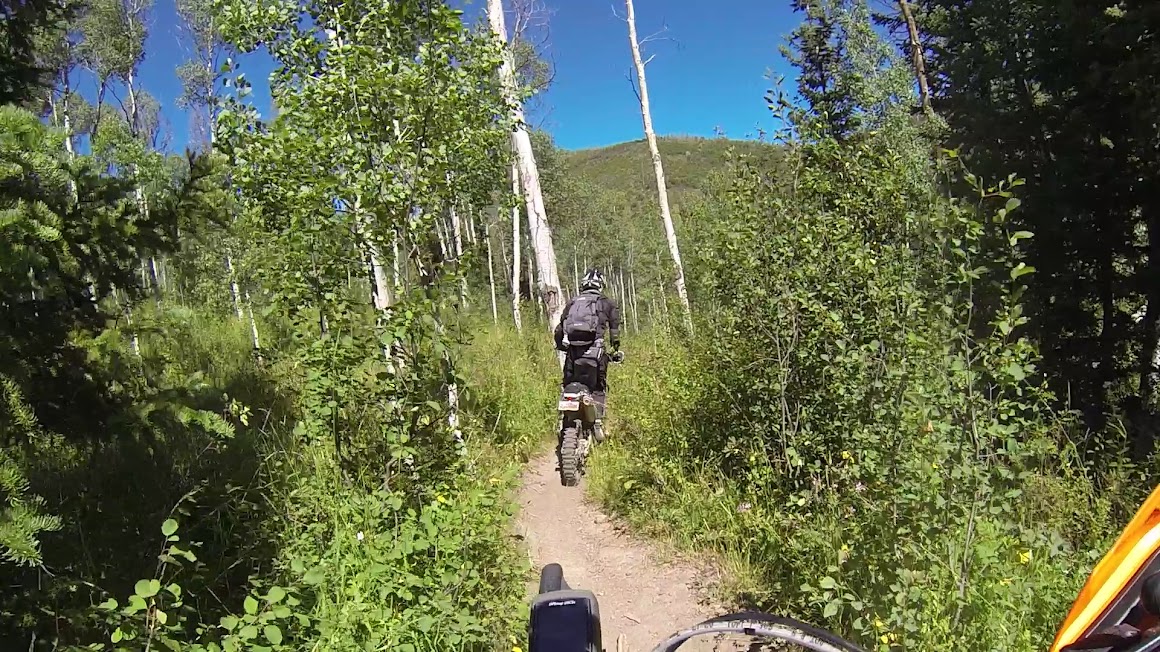 We decided to ride the northern-most leg of Center Trail which none of us had ridden before. I attempted it once, but was turned back by a beaver pond that flooded the trail. 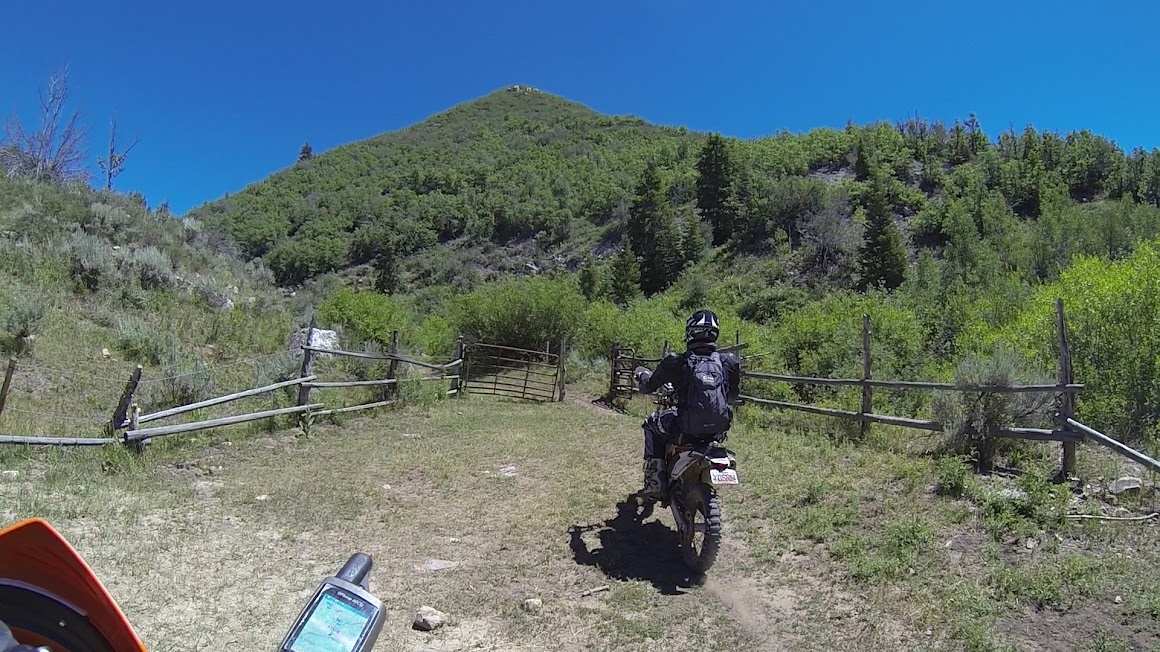 The entrance to the northern segment

Since this was a new trail to us, Bob took the lead so he could scope it out. Shortly after passing through the entrance gate, you come to the same beaver pond that turned me back years ago, only now there are a couple of sink holes in the trail. Bob thought he could ride through the first one, but sunk in deeper than expected. Jason and I helped him get his bike through, then turned back and took the alternate route.

Rather than follow the main trail straight forward, take a left turn immediately after passing through the gate. This leads to a steep hill climb, and then a descent on the other side, rejoining the main trail after the beaver pond. 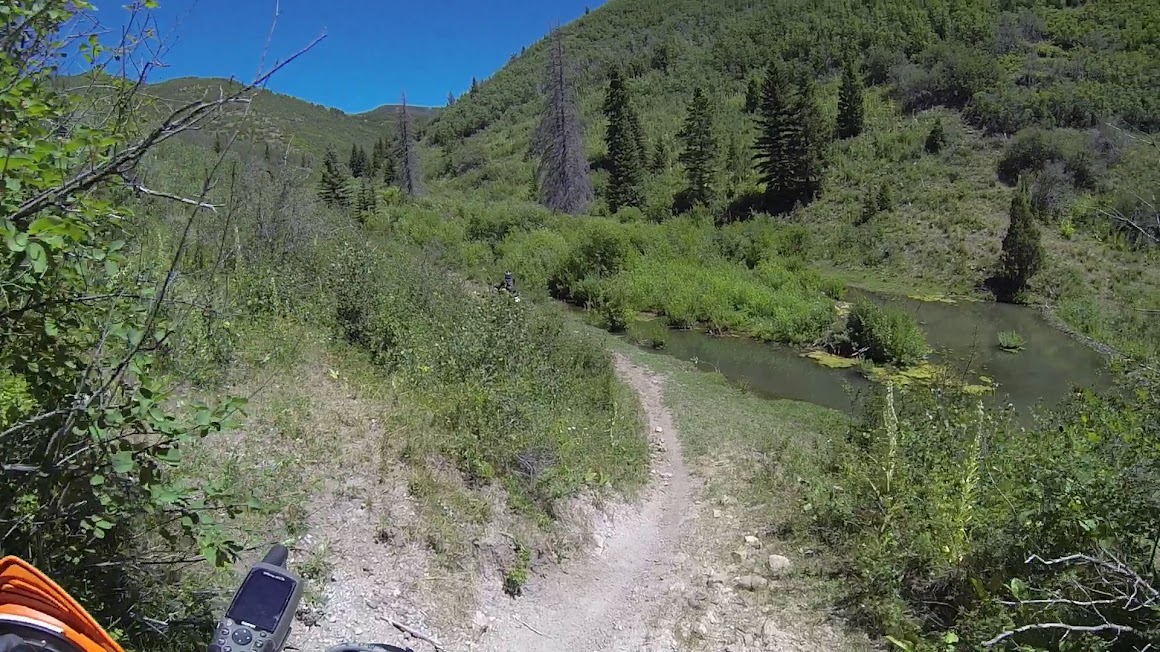 Shortly after passing the beaver pond you come to another rocky hill climb. If either of these first two climbs tests your skill limit, turn back now – the next two hill climbs are even harder, with much larger boulders. 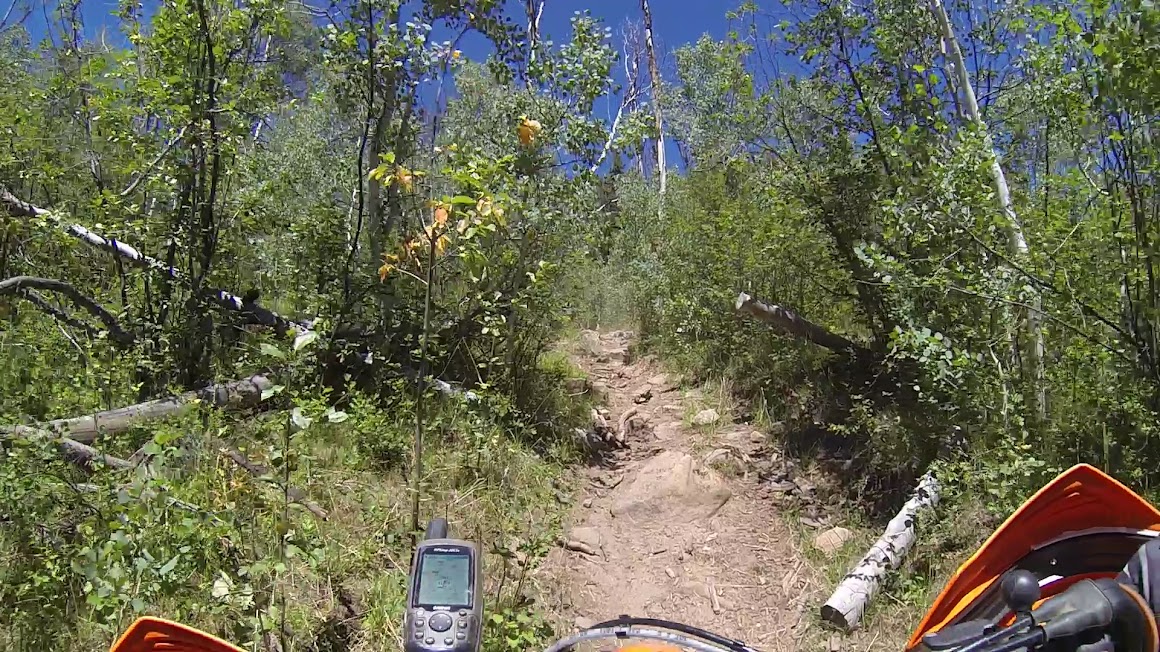 Once you pay your dues on these rocky sections, the trail is really fun and well worth the effort. Most of it is fairly smooth and flowing through small valleys. There are a few sections with some side hill exposure, but nothing too intimidating. 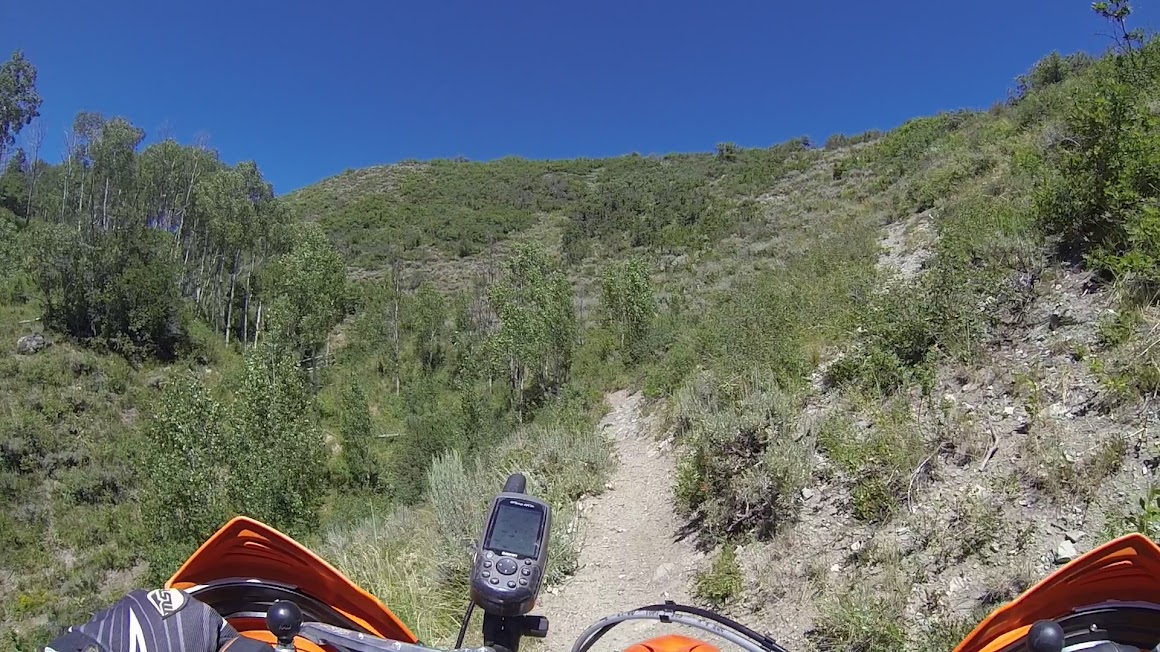 There are a few sections with some side hill exposure

We stopped for lunch under some large cottonwood trees, and then finished up the single track. It was getting late when we finished, so we took dirt and paved roads back to the car, arriving at the car one minute behind our target time. We loaded up and headed home for a nice BBQ with the family. It was a great day with beautiful weather, great scenery, and really fun trails.