Posted on September 18, 2015 by gardinerfamilyadventures

Kim and I decided to drive down to visit the North Rim of the Grand Canyon. We left home the day after Labor Day. It is roughly a six hour drive from SLC to the North Rim, but much of it is fairly scenic.

When you arrive at Jacob Lake, you turn south on Hwy 67 and drive roughly 45 miles to the North Rim. We were surprised at how thick and beautiful the forest was. It was a very pleasant drive and there wasn’t very much traffic.

We arrived mid-afternoon and explored the lookout points around the Grand Canyon Lodge near Bright Angel Point. It had rained earlier in the day, so the skies were fairly clear. 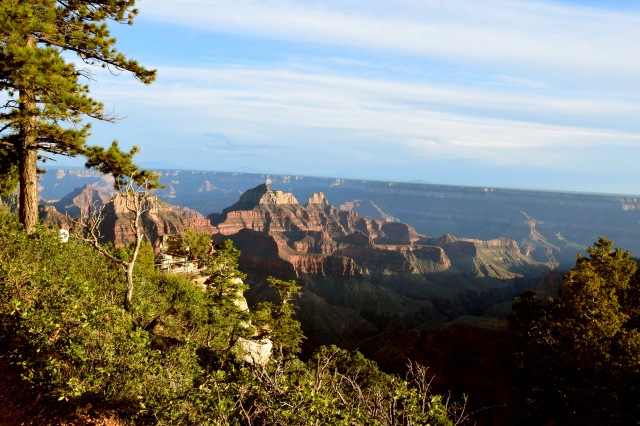 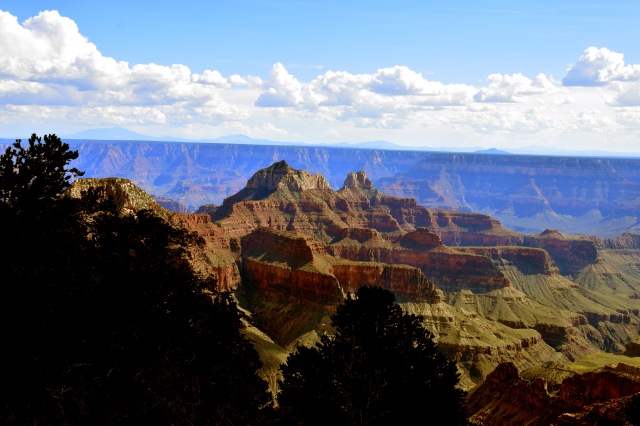 Late afternoon shot from the Lodge 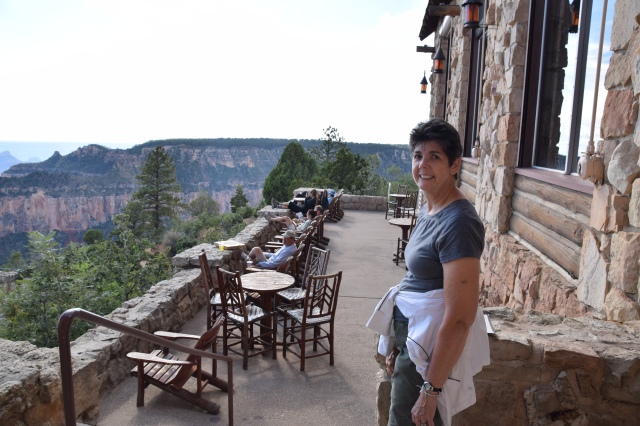 Kim on the balcony at the Lodge

We checked into our cabin and made reservations for dinner. We were surprised to learn that we were now on Pacific Standard Time.

Dinner was quite expensive, and as usual, expensive restaurants don’t really suit. But we had a pleasant evening enjoying the surroundings and the staff was very helpful.

Our cabin was quite a disappointment. It is smaller on the inside than on the outside. The room kind of reminded us of our cabin on the cruise ship – you could pass out in the shower and not fall down. 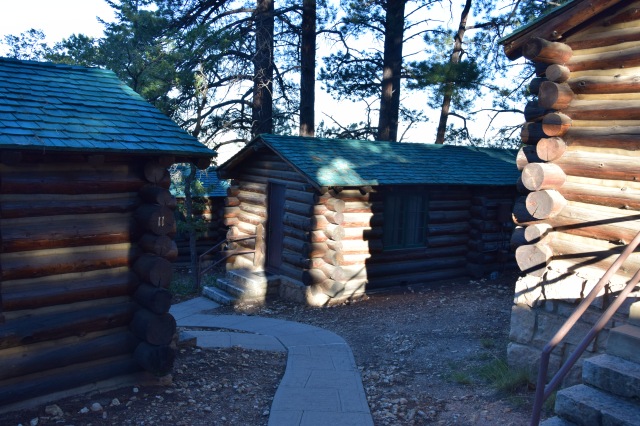 Some of the more expensive cabins have a porch with rocking chairs and a view of the canyon. Our cabin was wedged in between several others, with no view at all. The cabin was very dark, making it difficult to read as we passed the evening away. But worst of all was the bed – it was the most uncomfortable motel bed I have every slept on (or tried to sleep on).

We brought our own breakfast so we wouldn’t have to pay expensive restaurant rates again, and checked out as quickly as we could. We took a few morning photographs and then took the scenic drive out to Cape Royal and Point Imperial. 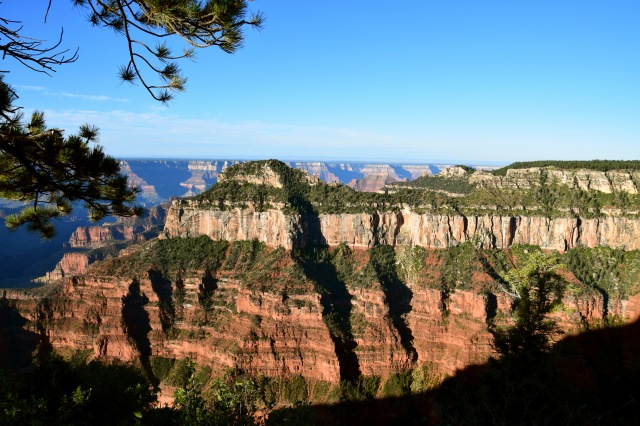 Morning shot from the Lodge 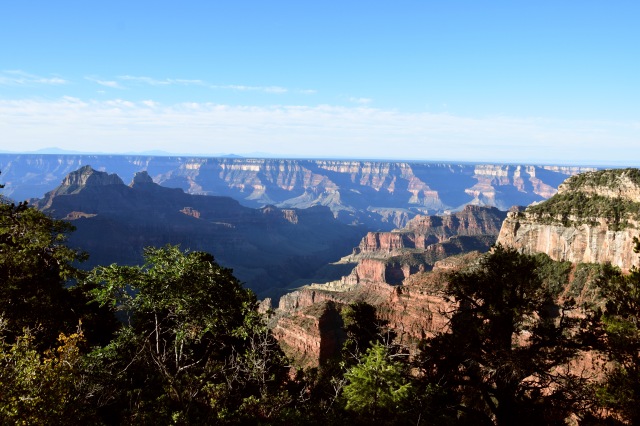 The drive out to Cape Royal was very nice. It might be stressful in a big vehicle or with heavy traffic, but we only had one car that just about side swiped us. This would be a fun ride on a motorcycle.

The views from Cape Royal and Point Imperial were nice, but not as spectacular as Bright Angel Point.  The views might be better in the afternoon when you are not looking towards the sun.

The temperature was absolutely perfect, so we enjoyed a nice leisurely lunch at Point Imperial.

After lunch we exited the park and made our way to Jacob Lake. We stopped at the fire lookout tower not far from the junction. Kim didn’t want to climb up due to her failing knees, but I thought I would give it a go. I think I made it about 1/3 of the way up when my fear of heights got the better of me. I wasn’t even to the top of the trees, but it was high enough for me. Going up was actually pretty easy, but those steps seem really narrow when coming back down.

We also drove out to see Jacob Lake. It is more of a pond than a lake. 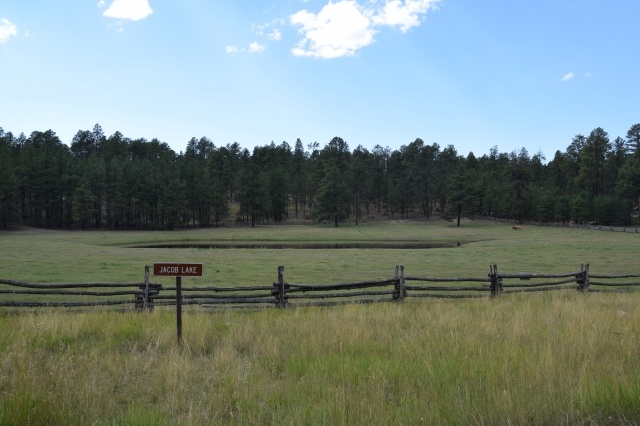 We checked into our cabin (#A). This cabin was much less expensive than the one at the North Rim, and it was much, much nicer. It had a lot more room and a much more comfortable bed.

Our cabin at Jacob Lake (A)

The food at Jacob Lake was about half the price of the Grand Canyon, and twice as good. I think that was the best bacon cheeseburger I have had in a long time.

We spent most of the evening sitting on the porch reading books. After dark we went to a photography workshop put on by Matt Rich, who sells spectacular photos of the Grand Canyon and surrounding area. His family owns and operates Jacob Lake.

The next morning we checked out early and drove Hwy 89A along the Vermilion Cliffs. The morning light and haze limited our visibility, but it was a relaxing drive.

We stopped at Lee’s Ferry and watched the river guides rig their boats for their upcoming trip down the canyon. The dories were very colorful and the rafts were huge!

We then stopped at Navajo Bridge, and then the visitor’s center at Glen Canyon Dam. Kim and I recently read “The Emerald Mile”, so it was interesting to visit the dam that was the focus of much of the book. 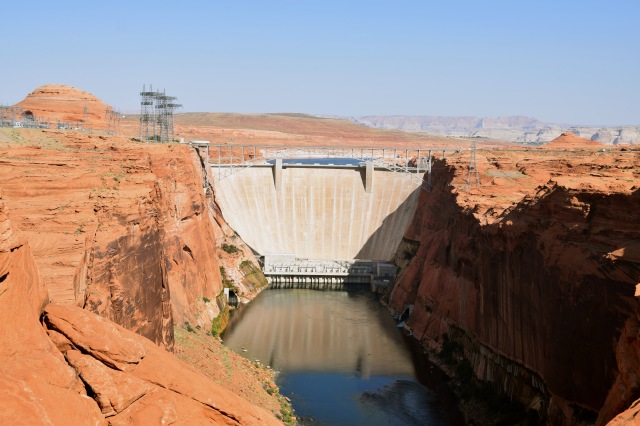 On our way home, I received a call from my dirt bike mechanic informing me that my bike was fixed and ready to ride. That made my day! It had been in the shop for six weeks – causing me to miss most of the summer mountain riding season. That put a nice highlight on our three-day scenic vacation of the Grand Canyon.