Posted on August 30, 2016 by gardinerfamilyadventures

I have only been to the Arapeen trail system once before.  Back in 2006 I took my two oldest sons on a three-day trip to explore some of the trails.  It was not one of our favorite trips.  I picked trails that were either too easy and boring, or too rocky or muddy.  And it rained every afternoon, turning the trails as slick as grease.  In fact, we bailed after two days and went elsewhere for our third day of riding.

The highlight of that adventure was building a bridge.  After spending almost an hour trying to get our bikes across a small mud bog, my oldest son suggested we build a bridge to make it easier for those that follow.  So we spent about two hours hauling logs and constructing a make-shift bridge across the small stream. 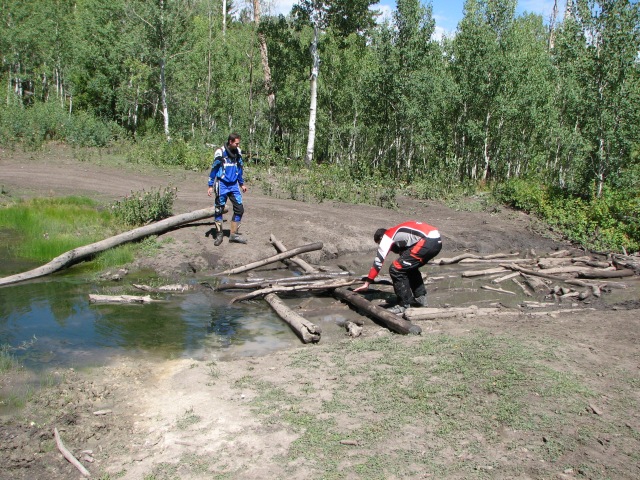 Gary and Kevin building the bridge

This year, my youngest son and daughter where willing to tag along with me on another moto-camping adventure.  We planned on doing a six-day trip around the Frank Church Wilderness in Idaho, but it turned out that the Magruder Corridor was closed for repairs.  So we decided to do a shorter three-day trip, and settled on taking another stab at the Arapeen trails.

The week prior to our trip was hot and dry throughout most of Utah – perfect conditions for the Arapeen mountain trails.  I was therefore quite disappointed when it started to rain 10 minutes before we got to the trailhead.  I knew that the trails could become as slick as grease with just a light rain shower.

It sprinkled on and off while we were unloading the trailer and prepping our bikes, but we decided to press on and give it a try.  We figured if the weather got worse, we could easily bail out and ride the pavement back to the car.

Our staging area at the top of Fairview Canyon

We parked at the top of Fairview Canyon at a staging area along the Skyline Drive.  From there we worked our way south towards Joe’s Valley Reservoir.  We planned on riding trail #12, which is an ATV trail that parallel’s the highway.  Because we got a later start than hoped, we bailed and took the pavement most of the way to the Miller Flat road.

The Miller Flat road is easy and fast, but has a fair amount of vehicle traffic.  Being a Monday, the traffic wasn’t really a problem, but the weather was constantly a concern – we continued to have on and off light sprinkles.

I had heard that the Potter’s Ponds ATV trail was fun, so we turned off of the Miller Flat road and enjoyed that section of trail.  We stopped for lunch at a group campsite not far from Potter’s Ponds. 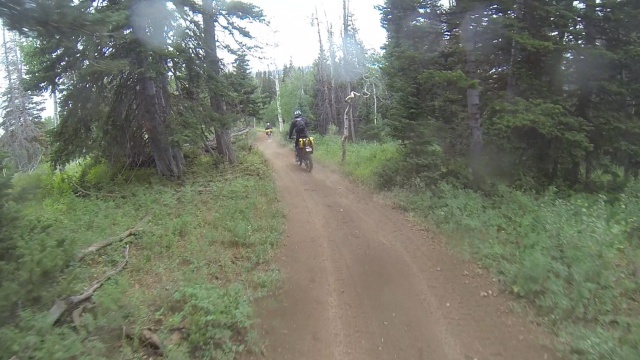 Heading to Potter’s Ponds on trail #57

After lunch we intended to take trail #53 to Joe’s Valley Reservoir, but we missed the turnoff and ended up taking the easier route on trail #51.  By now the rain had let up, so we figured we were safe to continue on our adventure.

After arriving at Joe’s Valley Reservoir, we turned west and rode up trail #5; Reeder Canyon.  The loop made by trail #5 was our favorite trail from our 2006 trip, so I was anxious to ride it again.  Reeder Canyon was steeper and rockier than I remembered (I get that a lot), but it was a fun ride, even with a fully loaded bike. 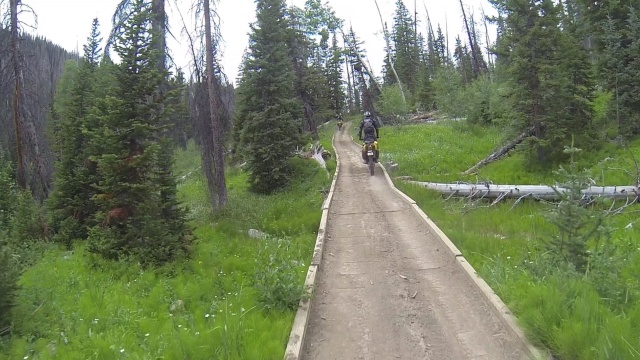 They now have very nice bridges over the wetlands

When we reached the Skyline Drive up on the ridge, we could see another storm system moving in.  We figured we better keep moving and set up camp before it hit.  So, we continued down the other half of the #5 loop hoping to camp at Grassy Lake.  It started raining just before we got to the lake, but we noticed a nice campsite in the trees about ¼ mile from the lake.  We quickly set up our tents just before the rain stopped again.  But then it started raining again, a little harder this time, so we strung my thermal blanket between some trees and cooked and ate dinner under our small shelter.

After dinner we walked down to Grassy Lake and then it really began to pour.  It rained hard for 15 or 20 minutes as we sought shelter under some trees.  The walk back to camp reminded us how nasty the trails can be when wet.  The mud was sticking to our shoes, making us feel taller with each step.  Luckily the storm passed and it didn’t rain during the night.

On day two we didn’t hit the trail until about noon.  We waited for the sun to burn through the clouds and dry out our tents.  This also allowed the trails to dry out.

With our late start we were anxious to make it to Manti for lunch.  We rode up trail #52, then along the Skyline Drive south to the top of Ephraim Canyon.  I had planned what looked like an interesting ride down to Ephraim, but with our late start we opted to stay on the main road. 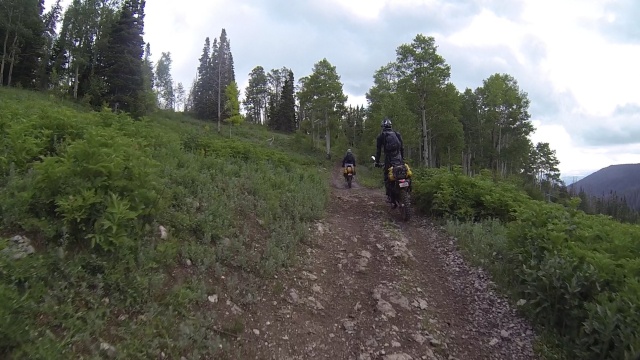 It sprinkled on us again as we rode down to Ephraim, but the temperature steadily climbed as we dropped in elevation.  We took the pavement from Ephraim to Manti, filled up our fuel tanks, and enjoyed a nice burger and shake at the local burger shop.

Riding past the Manti Temple

After lunch we rode up Manti Canyon, being careful to avoid the trails my boys didn’t like ten years earlier.  I remembered that the mud bog was on trail #3, but trail #3 seems to go everywhere, so I wasn’t exactly sure where.  This time we rode up the main road and then veered left on #3, up past Logger’s Fork Reservoir and on to Jet Fox Reservoir.  That was a fun trail. 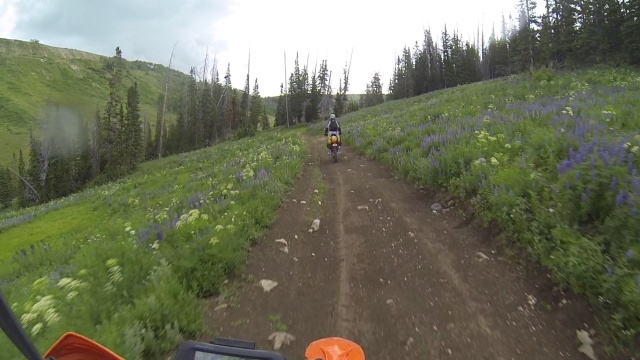 After crossing the Skyline Drive, we rode down trail #73, which made me quite nervous at first because the trail was quite wet.  Luckily it wasn’t very slippery even though there were many muddy sections.  As we dropped in elevation (rather quickly), it got warm and dry.  We rode past Cove Lake, which could have made a nice place to camp.

We came to a junction and opted to go left onto trail #74 guessing that it was not as steep as the lower portion of #73.

Jason crossing a stream on trail #71

We joined #71 and finally #72 as we worked our way to Duck Fork Reservoir – our planned place to camp. 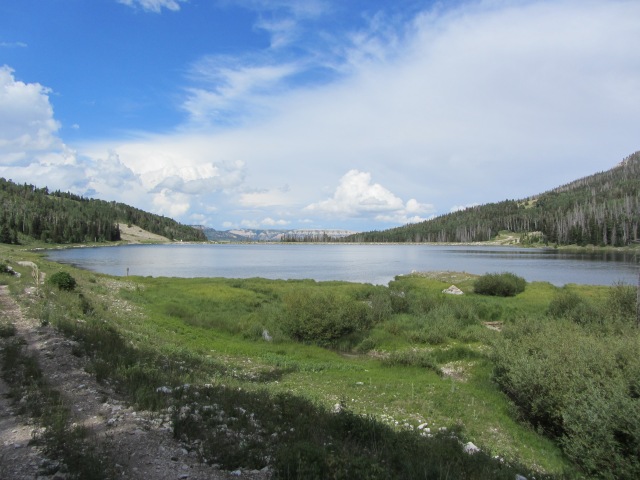 There was a restroom near Duck Fork Reservoir, but no good camp spots near the outhouse.  We found a nice meadow below the dam near the stream.  This was a great camp with clear water in the stream (which we filtered to refill our water bottles) and thick grass to sleep on.

After dinner we took another short hike to look at the reservoir and visit the restrooms.  It was a pleasant evening with no rain and everyone slept great that night.

On our final day, we rode #72 back up to the Skyline Drive and then buzzed back to our car about 45 miles away.  Some sections of the Skyline Drive are in really good condition, but the middle section was covered with 10” deep truck tire ruts.  The ruts didn’t give us any real problem, but they got old quickly and we had to stay focused to not wash out in a rut. 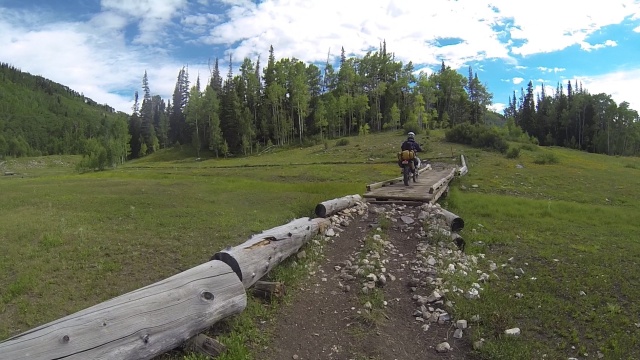 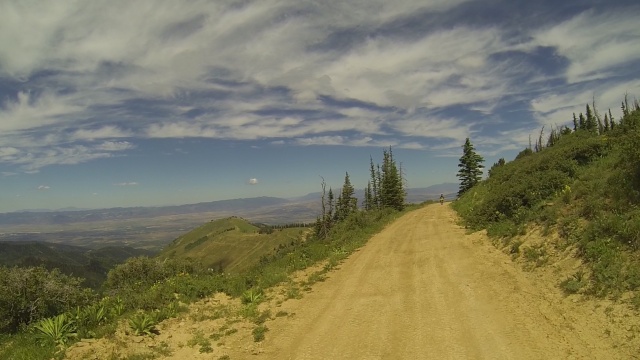 Spectacular views along the way

We made good time, arriving back at the car well before noon.  We loaded up the trailer, changed clothes, and drove down to Fairview for another burger and shake.  That was a good way to finish off our three-day, 170 mile ride.  In spite of the weather, we had a great time.  The scenery was spectacular.  We had a good mixture of ATV trails, Jeep roads, gravel roads, and pavement.  We found great places to camp and were well prepared.  Our only mistake was not bringing enough food to satisfy Jason.