Posted on April 24, 2016 by gardinerfamilyadventures

Marcy and Isaac invited Kim and I to join them on a family vacation to Zion National Park.  Isaac rented a very nice home in LaVerkin, about 20 miles west of Zion NP.  The home was cheaper than two motel rooms, and had a lot more space.  The accommodations were wonderful, there was plenty of room for the grandchildren to play, and everyone really enjoyed it.

We left home Wednesday afternoon at about 4:00 PM.  We met up with Marcy’s family in Fillmore when we stopped for dinner.  We arrived in LaVerkin at about 9:00 PM, which gave us time to settle in before bedtime.

On Thursday morning we all piled in Marcy’s minivan and drove to Zion National Park.  We took the shuttle bus up the canyon for our first hike at Weeping Rock.  The kids enjoyed riding on the bus.

The hike to Weeping Rock is quite short, but it is sort of steep.  The trail is paved, but it is wet at the top, so you need to watch your footing.  The kids did really well on the hike, and they enjoyed using Kim’s walking stick.

Isaac and the girls at Weeping Rock

After arriving at the falls, I took a picture of Sophie and Aspen sucking on their Camelbak hose in commemoration of the photo we took years before of me, Jamie, and Jason at the same spot.

We boarded the bus and rode it to the very last stop to enjoy the Riverside Walk.  This trail is also paved, but it has a fair amount of sand on the trail.  We didn’t make it all the way to the end, but we got pretty close.  We decided to head back down and enjoy lunch near the lodge.  On the return hike we saw a family of mule deer that were very accustomed to being near humans.

After lunch we enjoyed an ice cream cone.  We then took the shuttle back to the car, and drove back to the rental house for naps.  Aspen was not the only one to take a nap.

We later returned to Springdale for pizza at Zions Pizza and Noodle.

We returned to the park Friday morning and took the shuttle to the Grotto.  From here we took the Kayenta trail to the Emerald Pools.  I had never done this hike before, but it was really enjoyable – I think it is my favorite hike in the park (of those that I have done).

Bridge to the Kayenta trail

The trail is not paved, but has a mixture of rock steps and dirt.  The trail follows a shelf, so there is a pretty steady, but gradual climb to Emerald Pools.  The trail has just enough challenge to make it interesting, but it is not overly difficult.

The trail offers some spectacular views down the canyon. 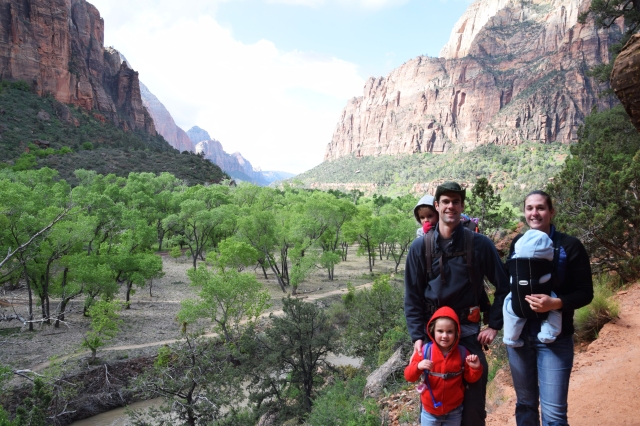 On the Kayenta trail 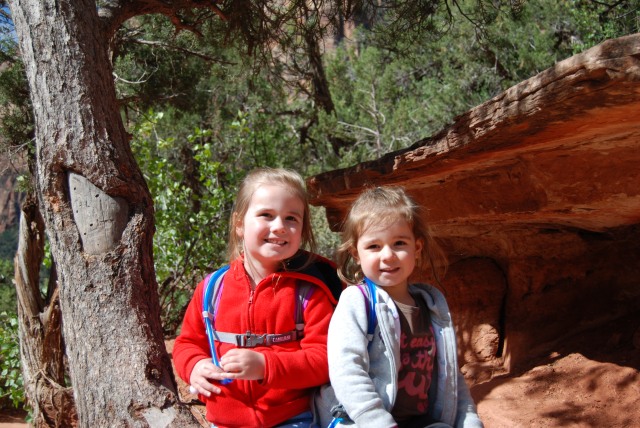 Just prior to reaching the pools, we took the upper fork which led us to the middle pool.

Emerald Pools in the background

Proof that Kim and I made it

Kim waited here while the rest of us continued on to the upper pool.  This was my first time hiking to the upper pool.  It is a much steeper and more rugged trail than the lower portion.  To my surprise, the girls absolutely loved it.  Some of the rock ledges were almost up to Aspen’s waist, but she enjoyed climbing up the rocks.  Sophie was so fast I couldn’t keep up with her to take many pictures.

Rock scrambling on the way to the upper pool

Just as we arrived at the upper pool we heard thunder.  The weather forecast for Zion called for rain starting at about 1:00 PM, but it was only 11:30 AM.  But within just a few minutes it began to hail.  We left our jackets and Camelbaks with Kim, so we were not well prepared.  The trail quickly became a muddy mess, but the kids were troopers as we returning to find grandma.

On the way down from the upper pool, I happened to meet my friend Steve Seely with his family.  They did the same hike we did, but in the opposite direction.  They ended up going down the Kayenta trail in the mud.  He said it was very slippery in spots, and their shoes were completely covered in mud.

After returning to the middle pool, we found Kim huddled under a large rock trying to keep out of the storm.  We put on our jackets and headed down to the lower pool where we could get a little bit of shelter from the overhanging cliff. 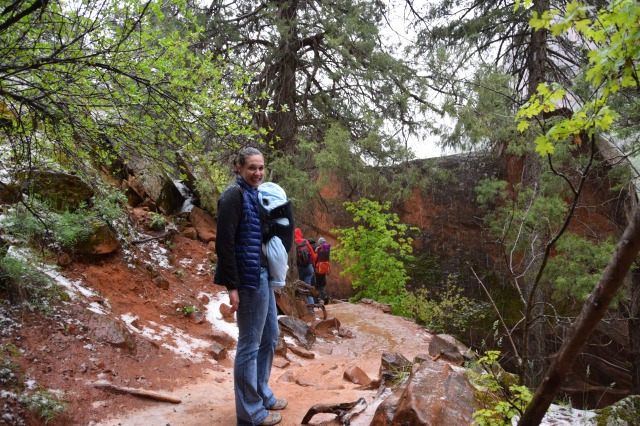 The storm had subsided a little bit, so we pressed on, taking the paved trail down to the lodge. View from the bridge near the lodge

We found a table in the auditorium in the lodge and ate lunch while we tried to dry off.

After lunch we returned to the house for naps.  We considered returning to the park during the evening so the kids could ride their bikes on the Pa’rus trail, but we decided to just let them ride around near the house and enjoy a quiet evening at home watching a movie and popping popcorn.

Rather than dealing with the crowd at Zion NP on Saturday (it was free National Park day, so it got very crowded), we decided to go to Snow Canyon.  We thought the kids would enjoy playing in the sand dunes, but the wind was blowing so hard that we didn’t even try.

Instead, we hiked to the petrified dunes where Isaac found a small sandbox that was somewhat sheltered from the wind.  The kids enjoyed playing in the sand and climbing around on the sandstone.

We decided to hike the Butterfly trail which led to the Lave Tubes trail.  Kim drove the car around to meet us.  This hike was longer than expected, and the jagged lava rocks where challenging for the kids.  They each stumbled a few times along the way.  They were all tired and thirsty when we finally got to the car. 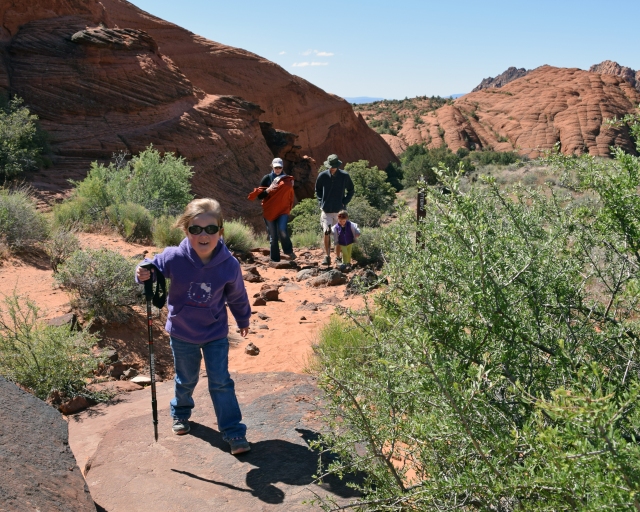 We were glad to get out of the wind and found a picnic table hidden in some bushes that protected us from the wind while we ate lunch.

After lunch we drove back to St George for gas, and then headed for home.  We had a stiff headwind all the way home, so the drive was fairly tense.

We all had a great time and the girls really enjoyed most of the hikes.  Even Luke was a trooper – he hardly made a peep on any of the hikes.