Posted on July 18, 2015 by gardinerfamilyadventures

July 10-11, 2015 Last year, for my first over-night adventure ride, I spent two nights camping in the Uinta Mountains. I wanted Jamie and Jason to enjoy a similar experience, but we only had time for two days of riding and one night of camping. I decided to explore the area around Duchesne Ridge since I have never been in that area before. The scenery turned out to be spectacular!

We spent a few evenings prepping our bikes and loading our luggage. On Friday morning, we were ready to depart. 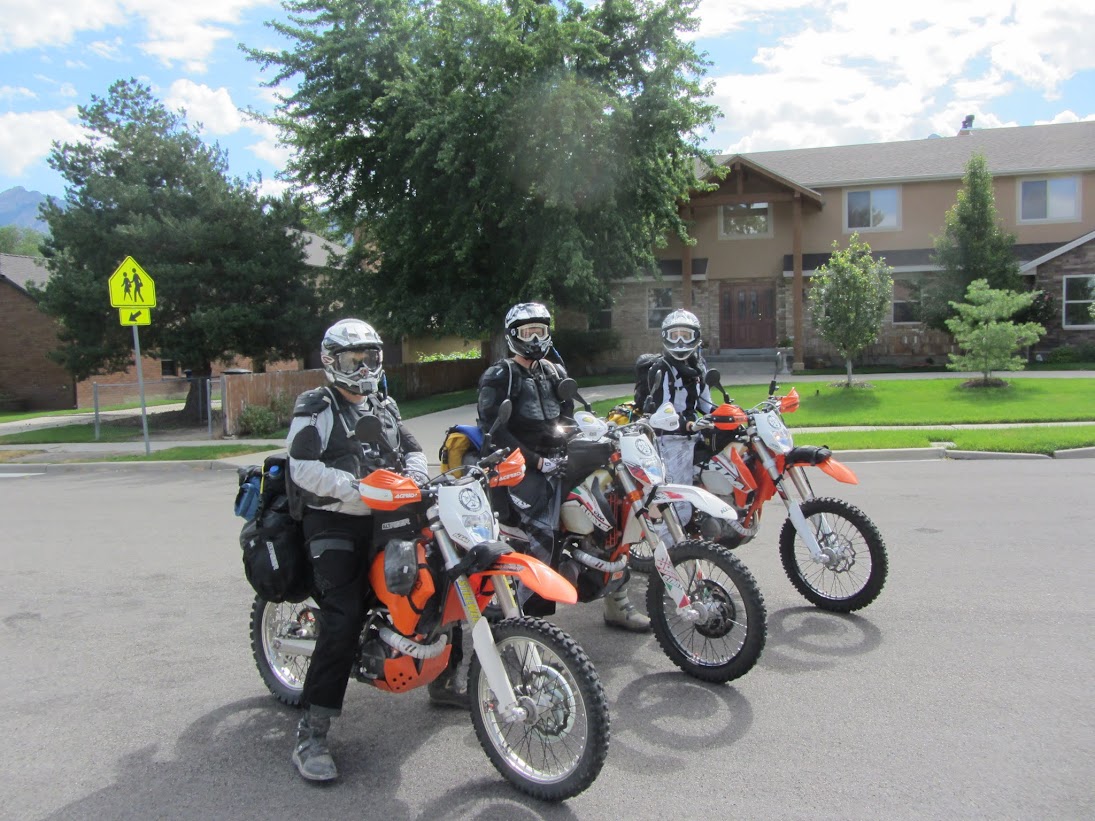 The plan was to leave from home (in Sandy), go up American Fork Canyon, take Main Canyon from Wallsburg to Daniel’s Summit and stop for gas and lunch, then on to the West Fork of the Duchesne River. Our original plan was to camp along the North Fork of the Duchesne, but we got behind schedule and didn’t make it that far. That turned out to be a good thing – I doubt we would have found a place to camp along the North Fork on a Friday evening. The plan for Saturday was to cut through Soapstone Basin on our way to Wolf Creek Pass. Because we were behind schedule we decided to skip the Soapstone section and just ride the highway to the pass. From the pass we rode along the Duchesne Ridge, dropped down to Mill Hollow Reservoir, then worked our way to Heber, stopped for lunch in Midway, then returned home via Guardsman’s Pass and Big Cottonwood Canyon. We had a good mixture of paved road, easy dirt road, and somewhat rougher Jeep roads. We even threw in a little bit of single track along the way. We encountered rain and had to take a break for about 45 minutes while a lightning storm passed by. We covered about 235 miles over the course of two days.

In general I don’t like riding on pavement on a small dirt bike – especially with heavy traffic. I therefore planned our route to stay off the main roads as much as possible. We worked our way south by taking the Dimple Dell road, then over Traverse Mountain to Highland, and then up American Fork Canyon. 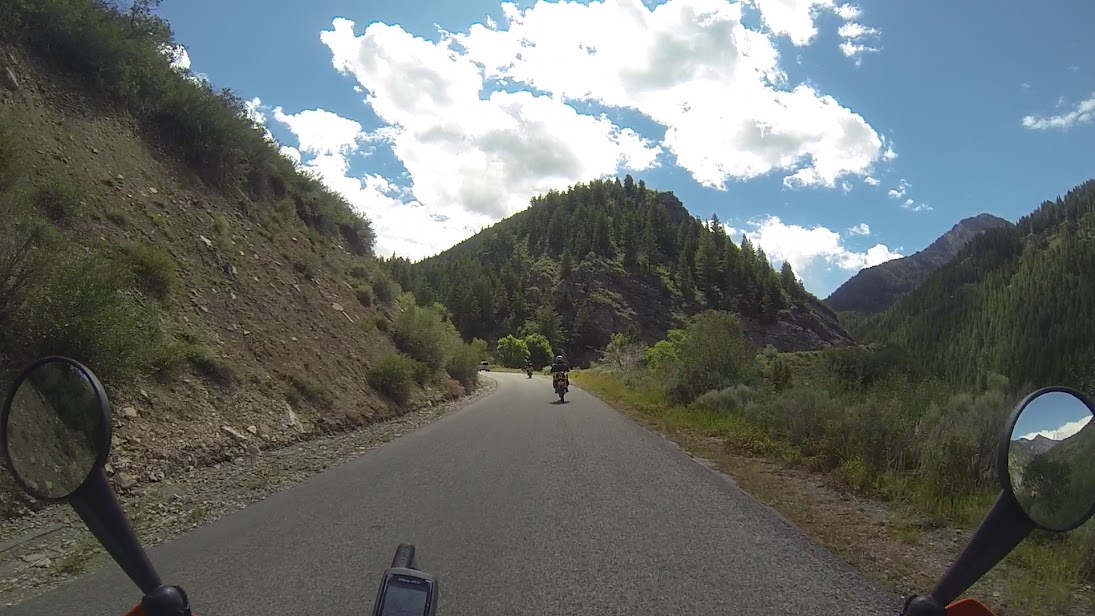 American Fork Canyon is fairly steep with a lot of switchbacks and turns, so it is perfect for a motorcycle. But to add to the excitement, we rode two sections of my favorite single track just to see what it was like with a fully loaded bike. These are some of the easiest single track trails in American Fork Canyon, so we didn’t have any problem, but we found that having a heavier bike certainly took some of the fun out of the ride. 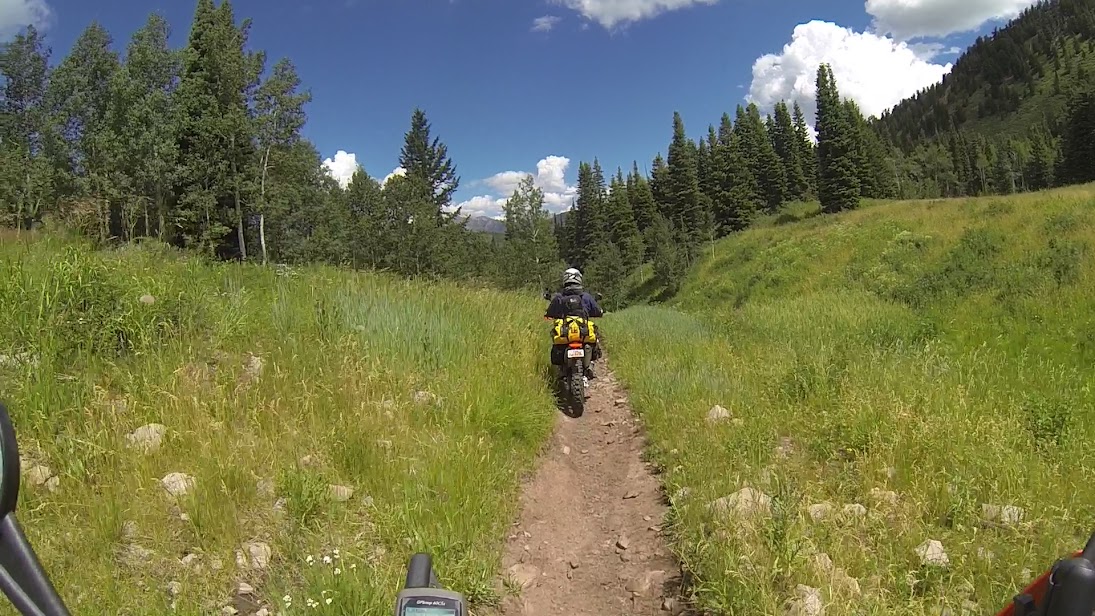 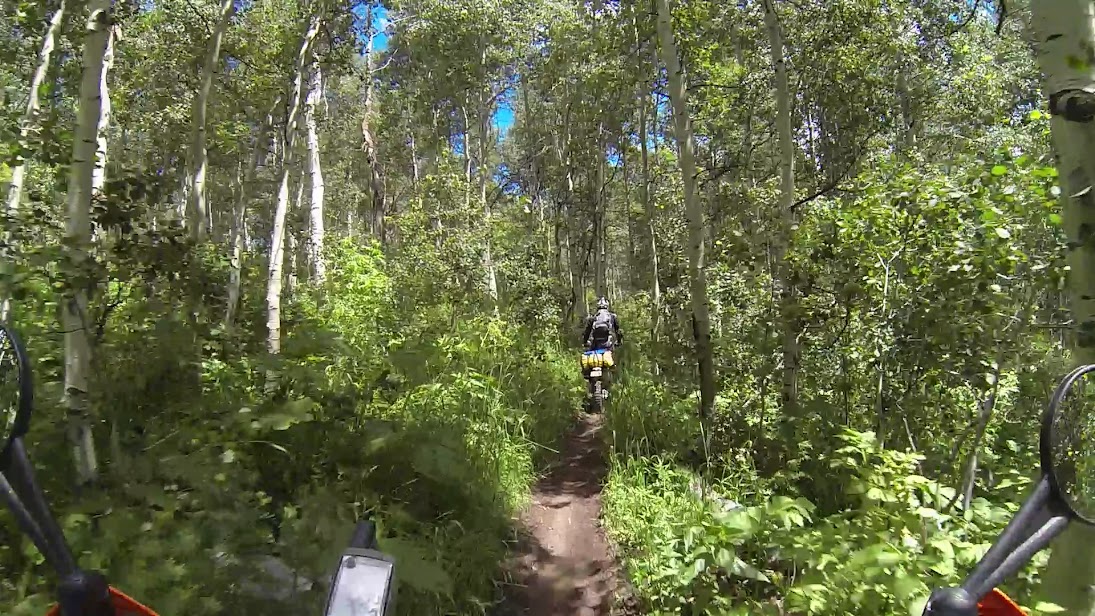 Weaving through the brush

We then rode down to Cascade Springs and took the dirt road to Charleston. The road was in good repair this year – last time I was here it had severe wash boards. We took a short jaunt down the highway along Deer Creek Reservoir, and then turned east towards the small town of Wallsburg. This is where the rain started. 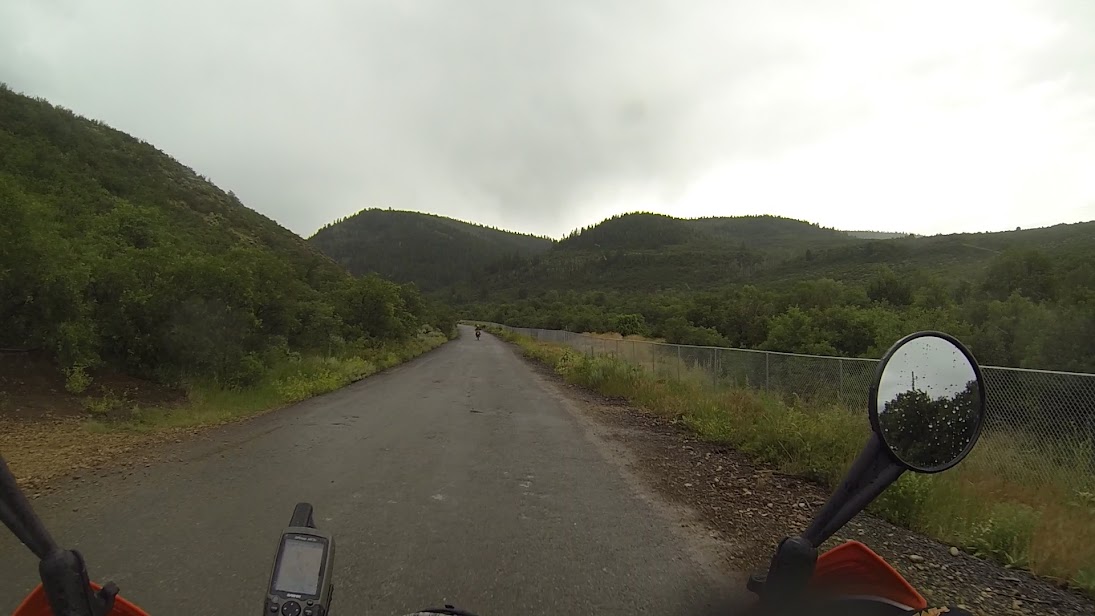 The rain was a little annoying, but the scary thing was all of the lightning in the mountains – right where we were heading. So, we decided to seek shelter and found a bench under an overhang in the Wallsburg LDS Girl’s Camp (which was unoccupied). 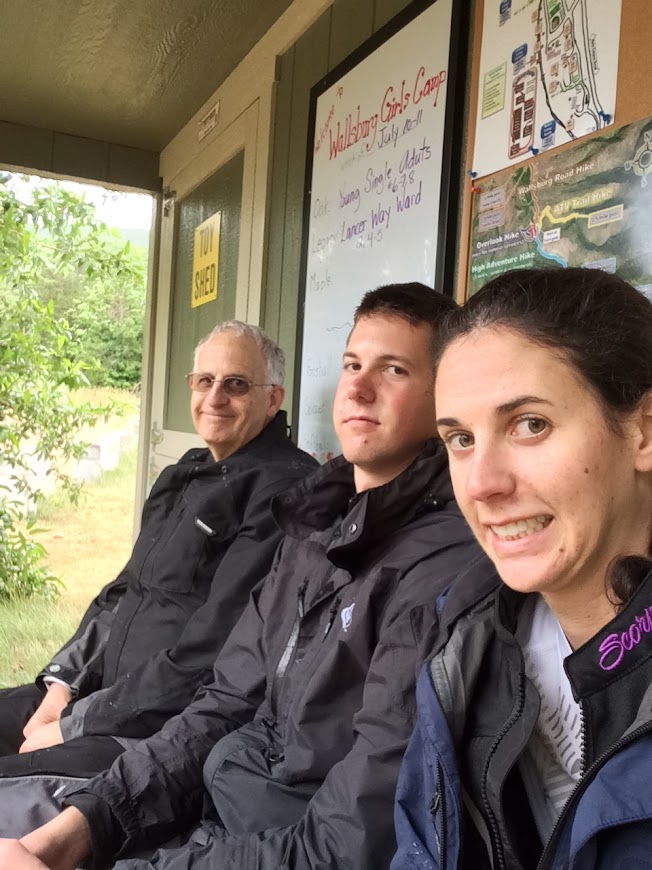 Waiting out the storm

We let the storm front – and the lightning – pass us by, and then decided to press on and see how muddy Main Canyon would be. Main Canyon turned out to be quite rocky, with somewhat sandy soil, so the rain didn’t pose a problem. 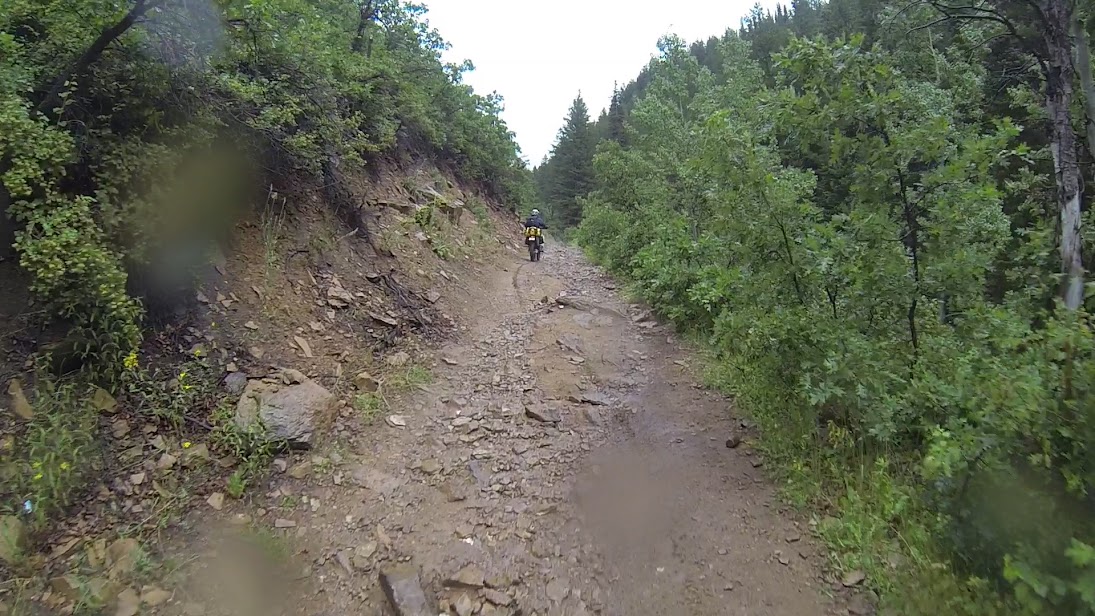 There is one hill climb with bowling ball sized rocks that were a little slippery due to the rain. Jamie and I made it up fine, but Jason took a spill. 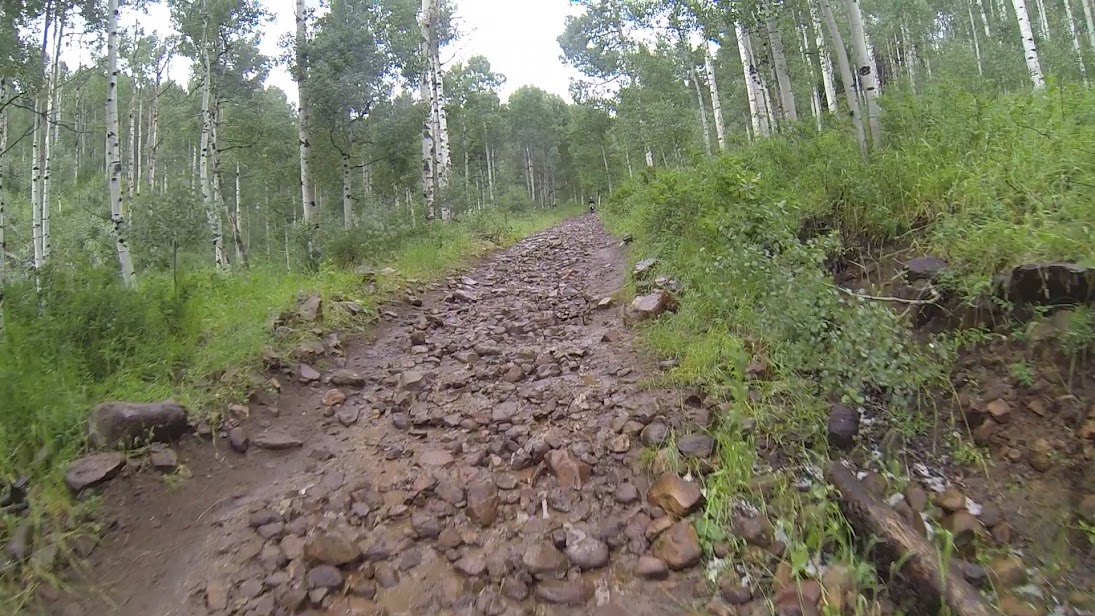 The rockiest section of Main Canyon (and our trip)

We arrived at Daniel’s Summit Lodge at about 3:00 PM. We bought gas (expensive) and had a wonderful, but late, lunch. 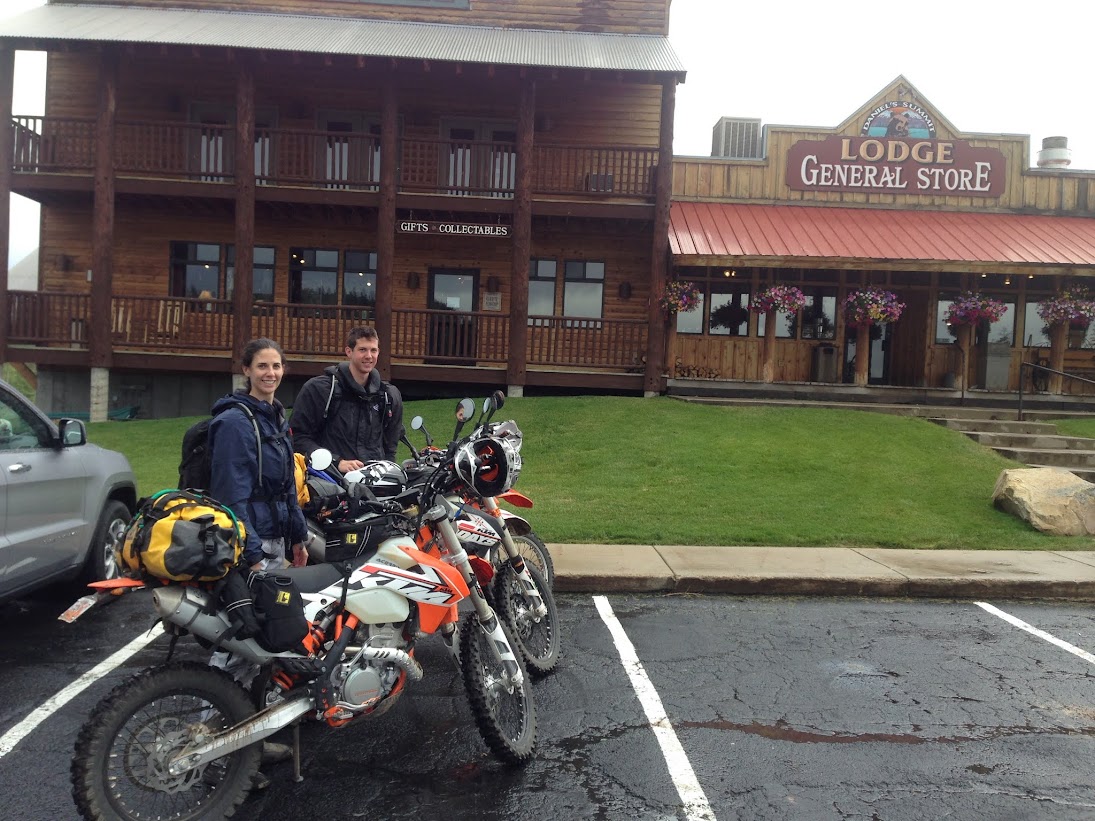 A late lunch at Daniel’s Summit

When we came out from lunch, the sun was shining and it looked like we might have some good weather going forward.

Closeup of the mountain trails

A short ways down the highway from the summit is a dirt road (#143) that heads over towards Currant Creek Reservoir. This road is somewhat rocky and the soil isn’t as sandy as Main Canyon. Luckily the mud wasn’t a problem. We continued east on #92, then turned north on #82 and #83, which leads to Mill Hollow. 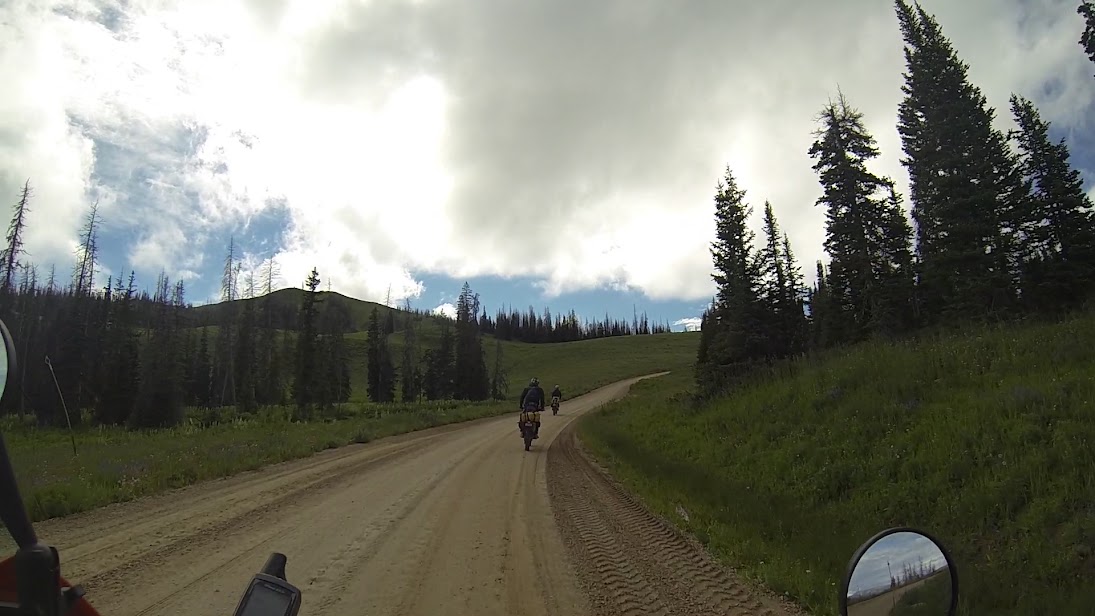 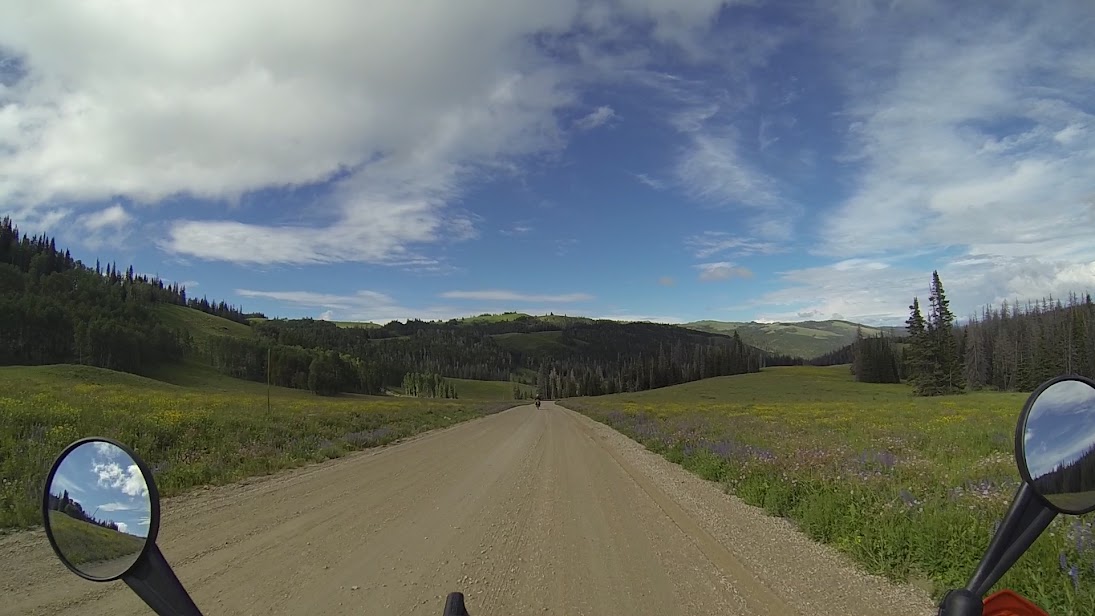 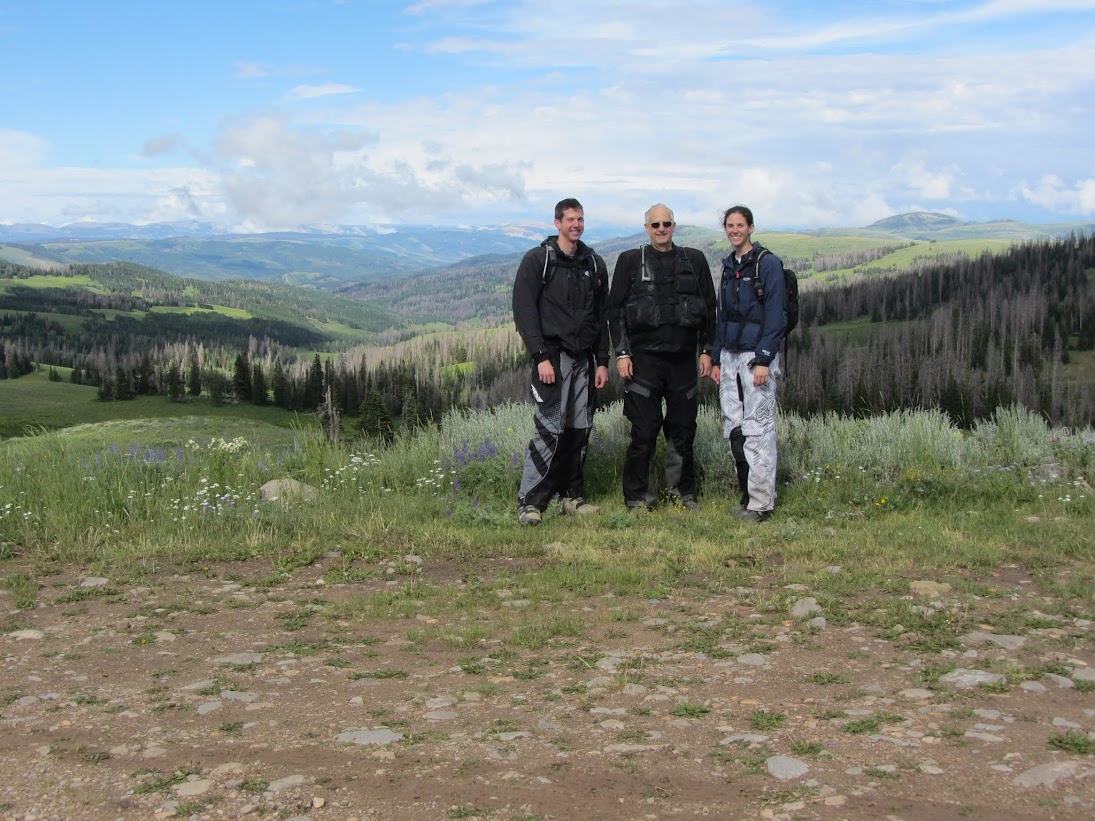 We turned east on trail #50, which follows the West Fork of the Duchesne River. I was surprised that the trail was rockier and rougher than I expected, since I was under the impression that this was a popular ride for those with large adventure bikes. With our smaller bikes the ride was quite enjoyable, and the scenery was great. 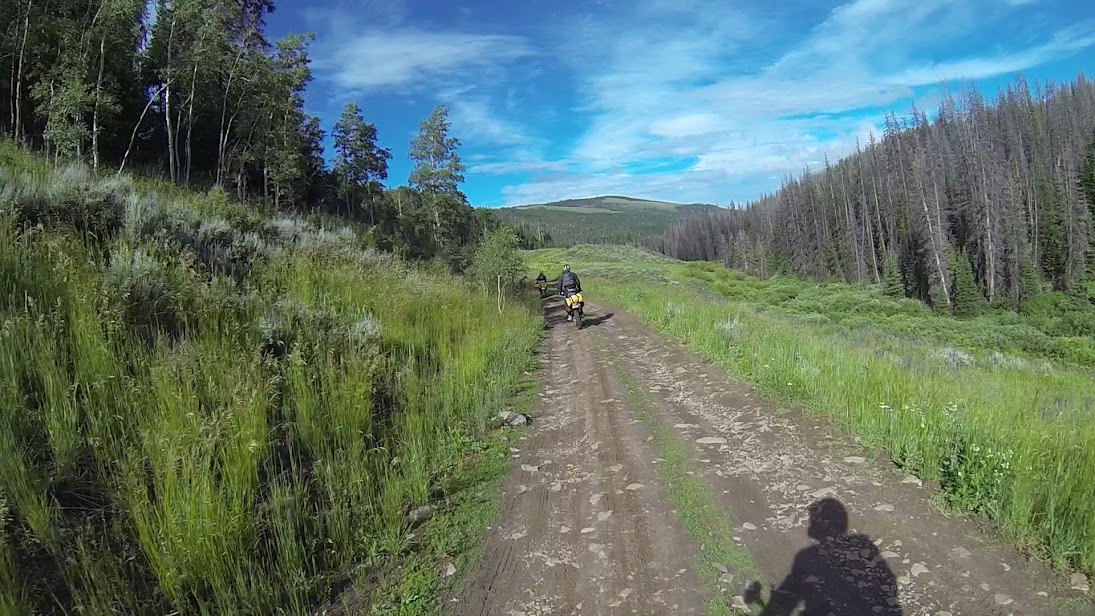 Starting down the West Fork of the Duchesne River

We decided to ride until about 6:00 PM, and then find a place to camp. Most of the good campsites were taken, but we finally found a site with a fire ring that was unoccupied. It turns out that this was probably the very last available campsite within an hour of riding. 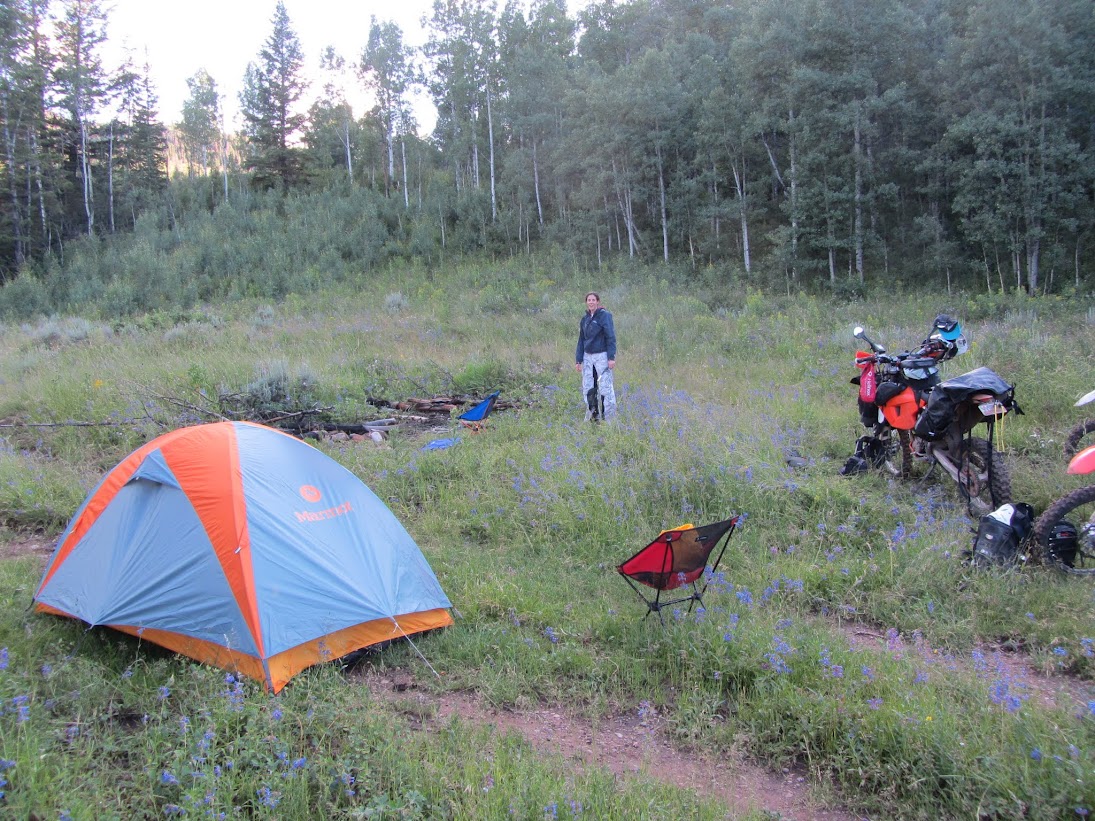 The campsite wasn’t the best – but it would do. The only semi-flat ground was on the dead-end road – but that meant you ended up sleeping in the tire trough. We collected a bunch of firewood from downed Aspen trees, and then spent about 45 minutes trying to start a fire so we could warm up our pre-cooked tin foil dinners. Even with two Eagle Scouts in the group we could not get a fire going. We need to add a few essentials to our packing list! I did, however, have a small backpacking stove, so we were able to convert our foil dinners to beef stew, so we didn’t go to bed hungry. We even topped it off with freeze dried Crème Brûlée. It rained again during the night, so our tents were nice and wet in the morning. Rather than wait for them to dry, we packed up and pressed on. Shortly after leaving camp we came to a small reservoir. Beyond that point the road was much smoother and wider and there were far fewer campsites. But the scenery continued to amaze. 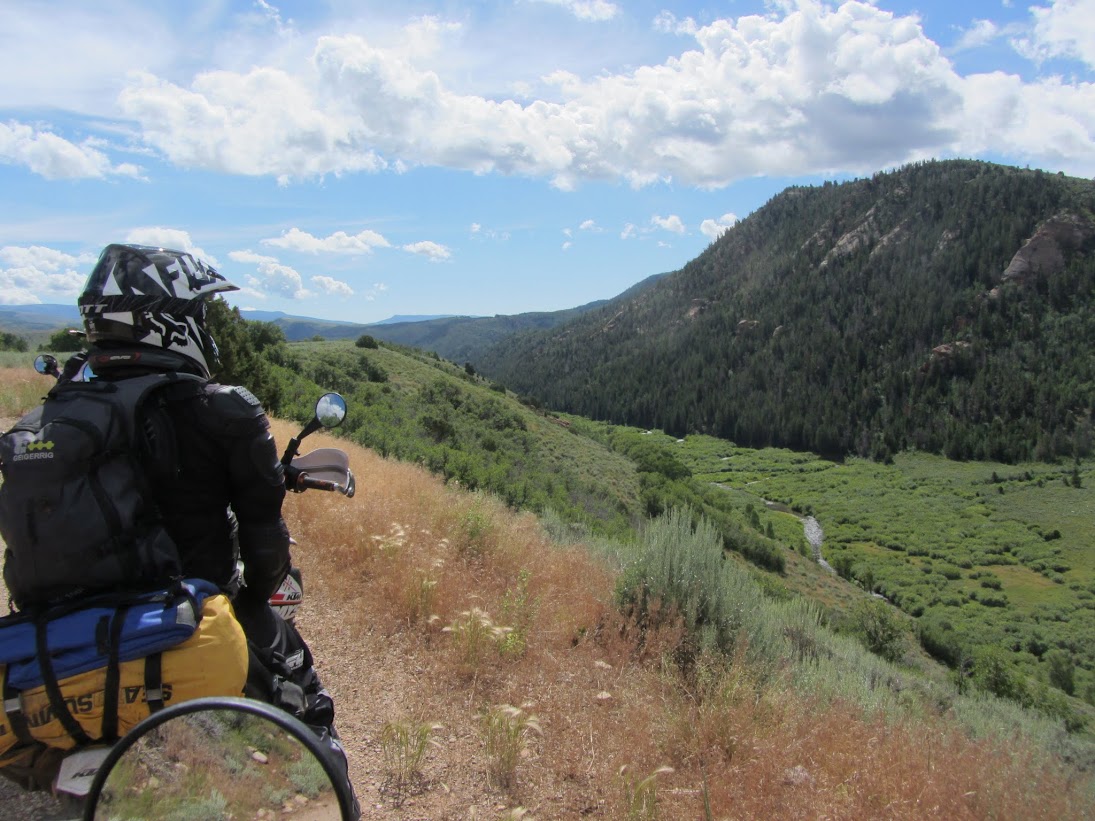 After passing the Moon Ranch we arrived at Highway 35. We rode east, then north to scope out the North Fork Road. This road was paved about half way, then dirt. It was a very scenic ride. 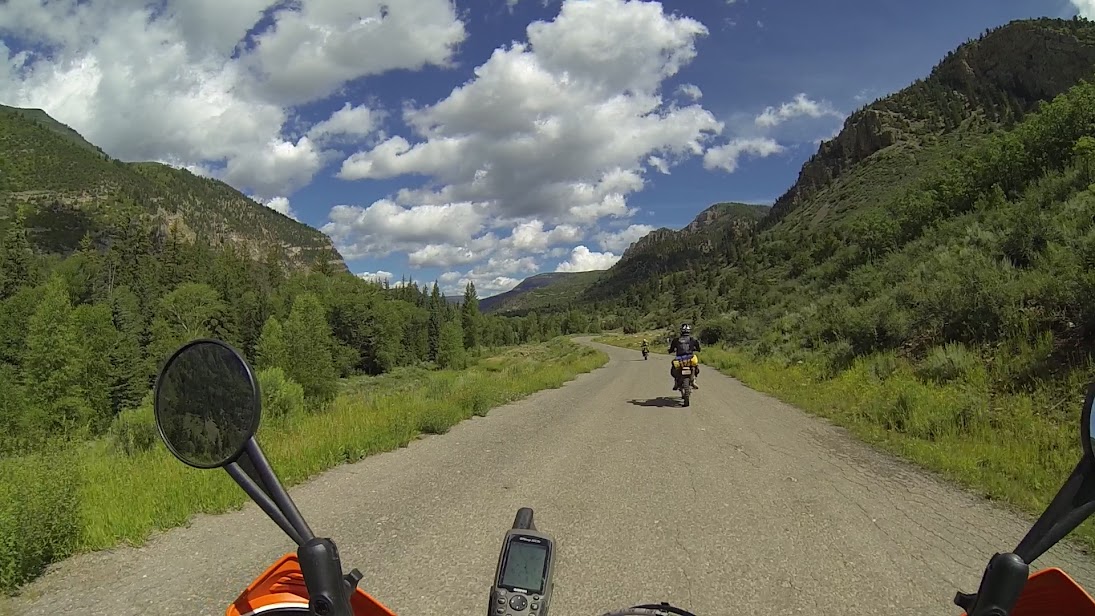 We returned to the highway and rode up to Wolf Creek Pass. After a short break at the pass, we took road #91 along the Duchesne Ridge. I planned on stopping for a snack while we enjoyed the view, but there was a cold wind blowing and we wanted to get off the mountain before an afternoon storm hit. 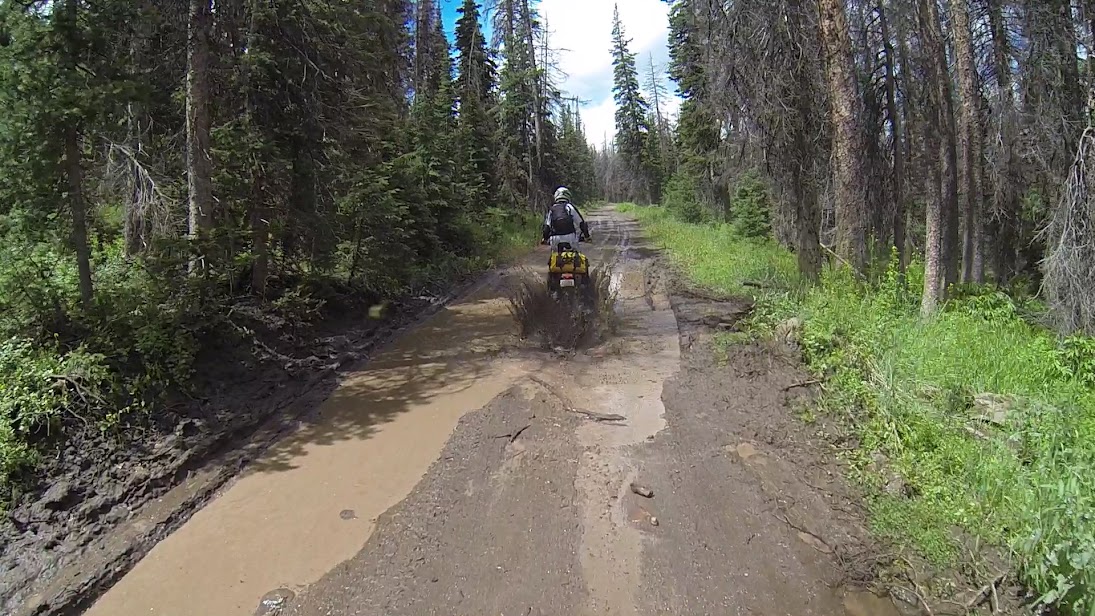 This was a fun ride, but there were numerous mud holes along the way. Some of them were much deeper than they looked. Luckily no one had trouble getting through. 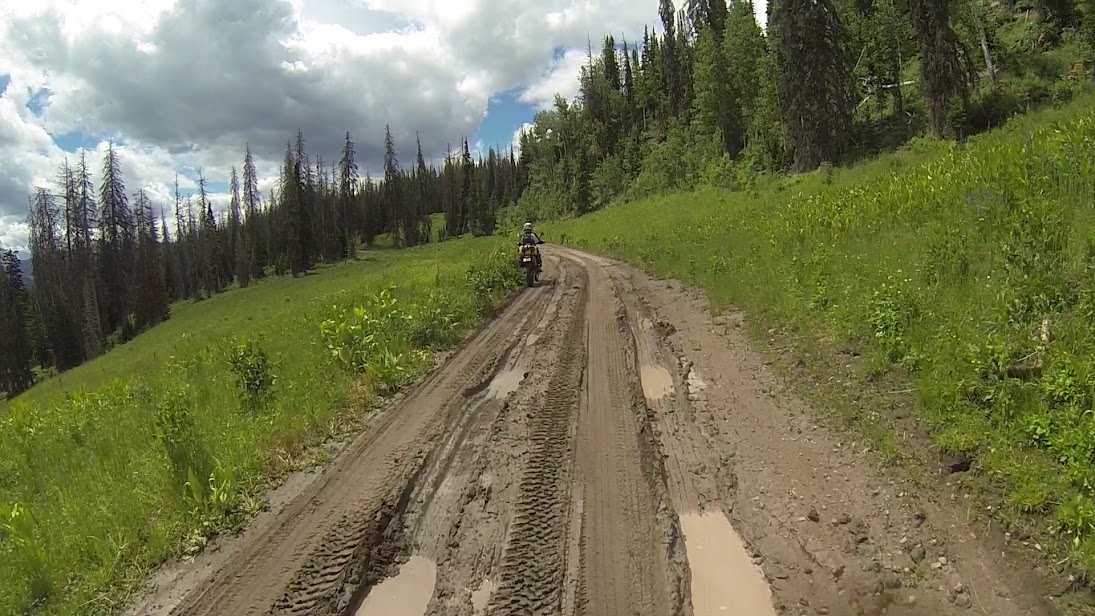 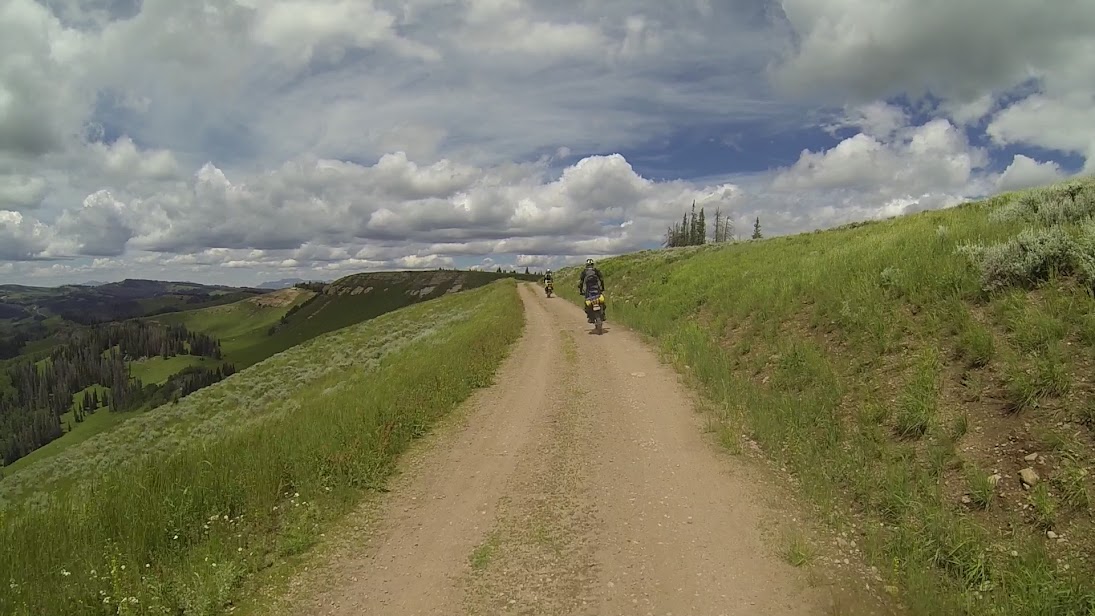 The temperature warmed up as we dropped in elevation on our way to Mill Hollow. I hadn’t been there since 7th grade science camp many, many years ago. It didn’t look familiar at all. The parking area was extremely full, so we opted to press on. 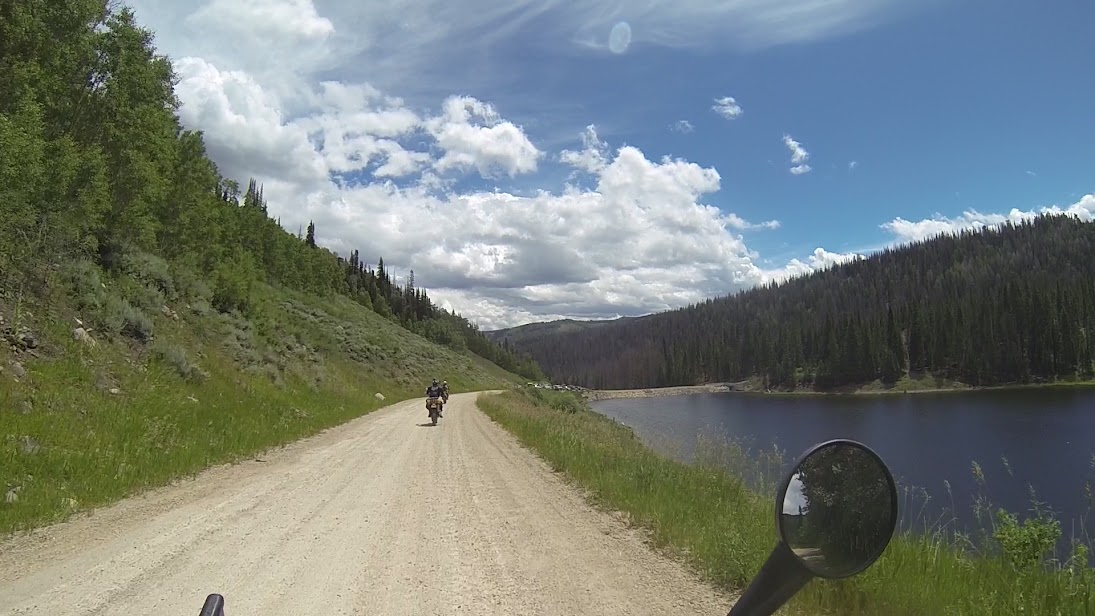 A few miles further down the road is an old guard station that is all boarded up. There was a nice fire pit with log benches, so we enjoyed our snack there. 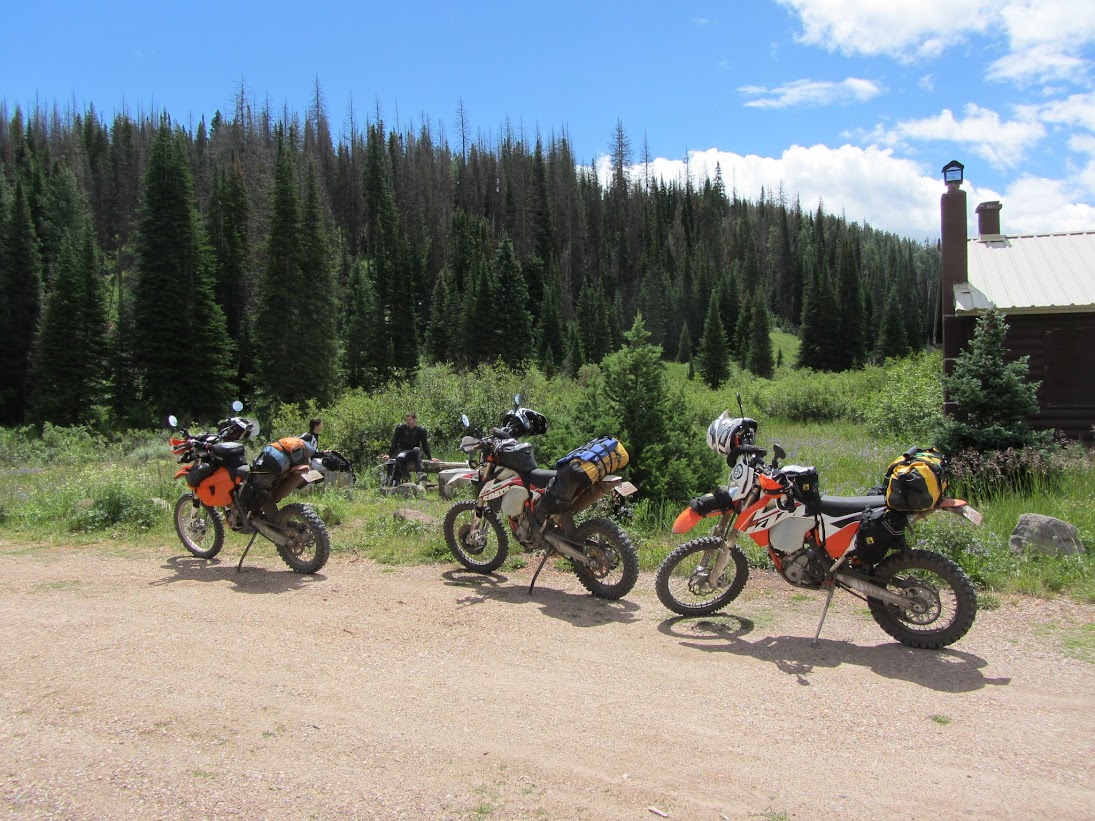 Snack time at the guard station

After our break we took trail #122 up to trail #60. Trail #122 was somewhat rocky, but not too difficult on small bikes. 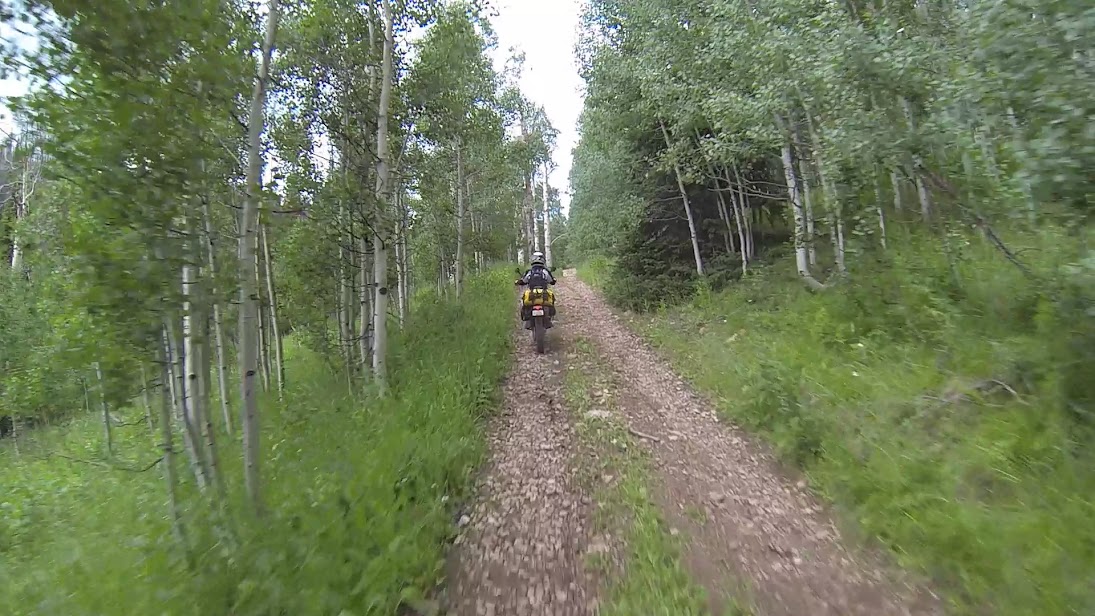 Trail #60 was a blast! It was mostly smooth dirt that twisted through the pines. Frequent mud puddles added to the pleasure as we wove past them. This was the most enjoyable dirt road of the trip. 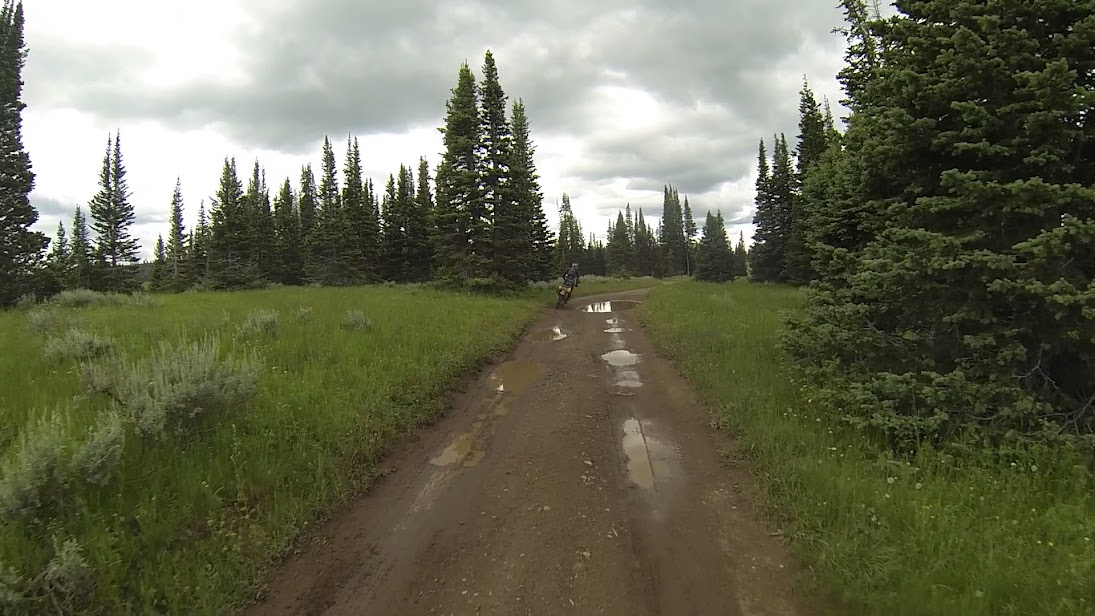 Trail #96 was also really fun. Our plan was to take trail #310 west, and then drop down into Heber. We quickly found that #310 is private property, so we had to take the pavement down to town. But that wasn’t all bad – this road was really fun on a bike. It was very smooth and wove through the trees and various cabin properties. 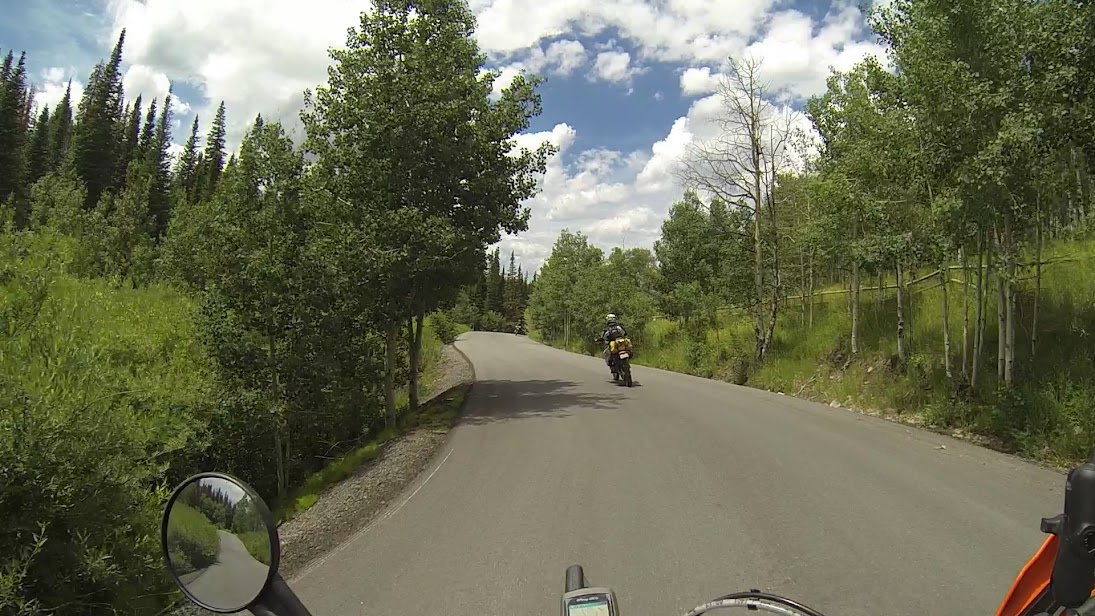 A fun ride down the pavement

We stopped in Midway for gas and another late lunch. We each got a nice hamburger and milk shake – which really hit the spot. 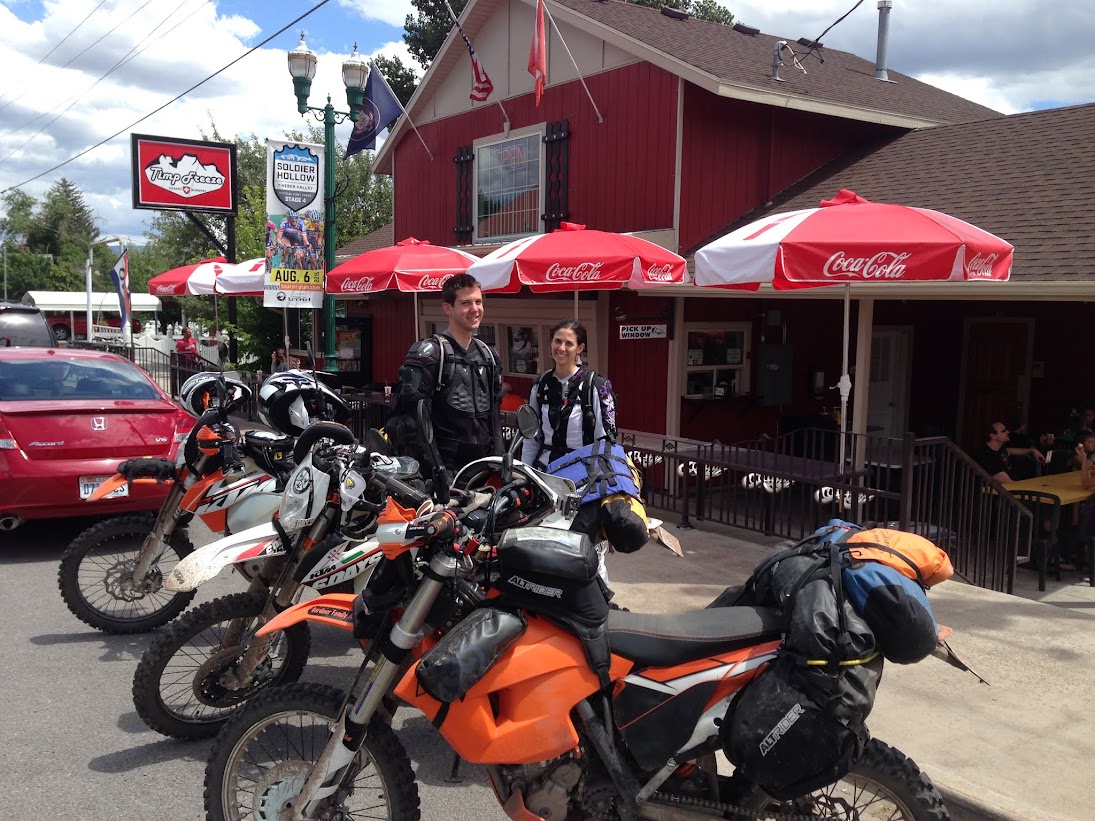 Just as we were finishing our lunch a gust of wind blew my bike over – and just like dominoes, my bike knocked Jason’s over, which in turn knocked Jamie’s bike over. The bikes didn’t sustain much damage, but all three of our helmets did. The temperature really dropped as we climbed towards Guardsman’s Pass, and it began to rain once again. Luckily it was a small storm and quickly blew over. We arrived at home with just enough time to unload and wash our bikes before dinner. It was a great trip and a great introduction to moto-camping for Jason. We learned a few lesson and will go better prepared next time. Jamie also learned that the KTM 250 lacks the power of the KTM 350. She did fine except on steep climbs on the pavement. The bike just didn’t have the power to maintain speed in 6th gear. That will soon be remedied with a few minor mods. Until next time…