Posted on April 15, 2015 by gardinerfamilyadventures

After installing a Rekluse auto-clutch I quickly learned that a left hand rear brake (LHRB) would be a great safety feature – especially for gnarly descents.  The only LHRB I could find at the time was also provided by Rekluse, but it is merely a modified bicycle brake system and I always felt that it was kind of weak. A few months ago an Australian company by the name of Clake (for “clutch-brake”) introduced a new product called a “staggered lever retrofit”, or SLR.  It looked like a much more solid design, so I decided to try one. Clake is a fairly small company and they have been swamped with orders from all around the world.  This, plus the slow shipping from Australia to the US meant that it would take about one month to receive my SLR kit.  Unfortunately it also meant that making contact and getting customer support was very challenging.  Luckily for me, a fellow inmate on AdvRider.com, who lives in Australia, offered to act as middle man and help me sort out a few problems. I was beginning to think my money had been lost and that I would never receive the SLR, but it finally arrived about one month after placing the order. 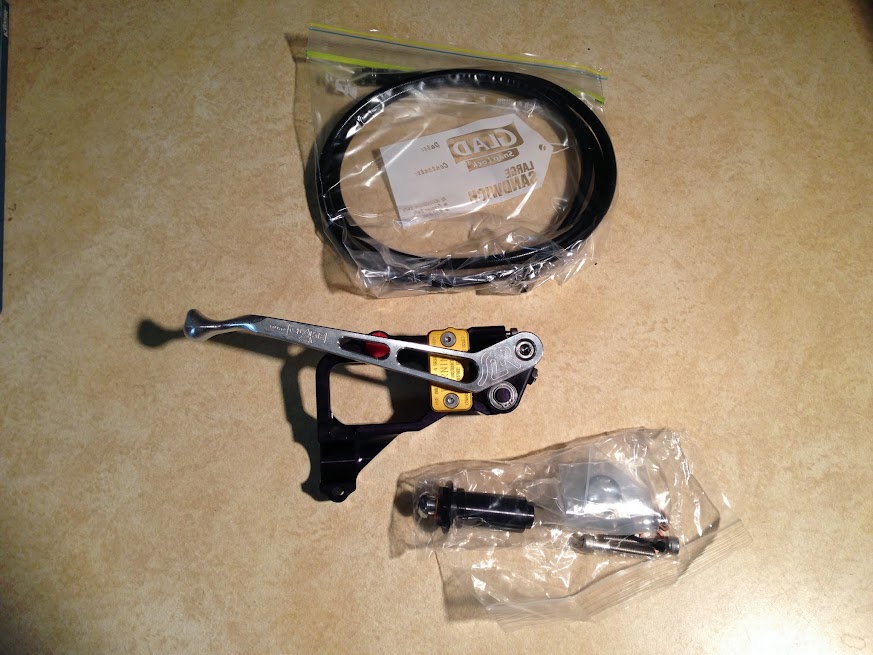 I was excited to install the new brake lever and test it out.  I began by removing the Rekluse LHRB.  My excitement quickly turned back to frustration when I realized that my kit was missing the two banjo fittings that screw into the ends of the brake line.  That meant I had to contact customer support yet again (thanks to my middleman) and wait about 3 weeks for the missing parts to arrive. Furthermore, my kit did not include any instructions.  The Clake website had a video of how to mount the brake lever assembly to the handlebar, but nothing about converting the rear brake master cylinder or how to bleed the brake line. Since I had already installed the Rekluse kit, it was pretty easy to figure out how to install this unit.  Notice that in the lower ziplock bag in the above photo there is a black cylindrical adapter and a rubber o-ring.  These both go inside the rear brake master cylinder reservoir.  Start by removing the brake fluid from the reservoir and then carefully place the o-ring in the bottom.  Then carefully screw the black adapter into the reservoir.  As it tightens, it should compress the o-ring, forming a tight seal around the adapter.  Essentially the adapter converts the reservoir to a short section of pipe – or brake line.  The new brake reservoir is up on the handlebar with the new lever assembly. The supplied DOT approved brake line then connects to the adapter via a banjo bolt.  Carefully route the line up to the handlebars, avoiding the exhaust pipe or any sharp objects that could wear a hole in the line.  Do not secure the line in place until after you have finished bleeding the system. 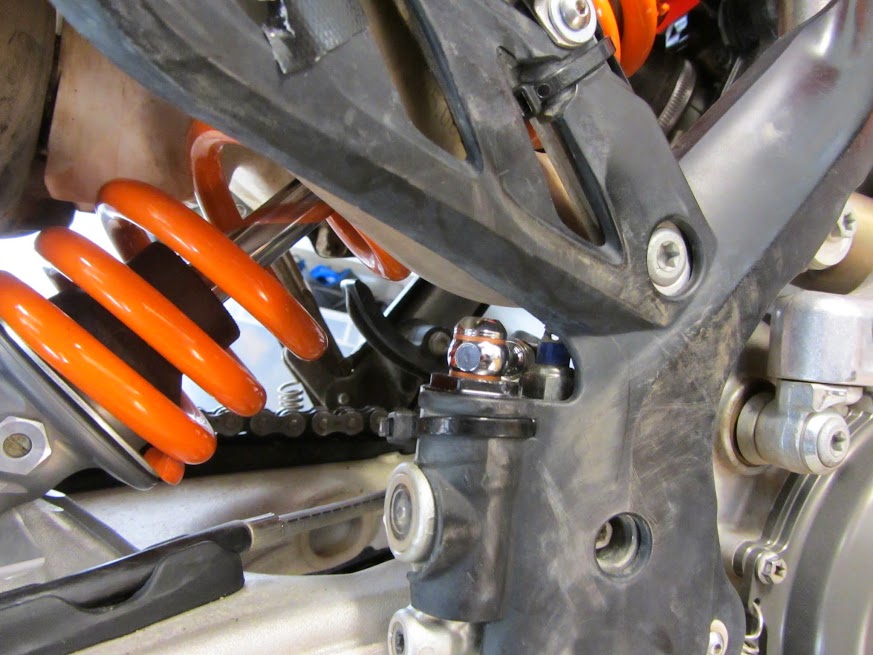 Note: The fluid sight glass on the old reservoir is no longer used to check fluid levels.  Do not worry about the air bubble that will likely be visible in there.  The sight glass is now outside of the fluid path.

Follow the Clake video instructions for mounting the lever unit to the clutch perch.  Then connect the other end of the brake line to this assembly (remove the plastic plug first).

Update: Clake now has a video showing how to properly mount and bleed the line. 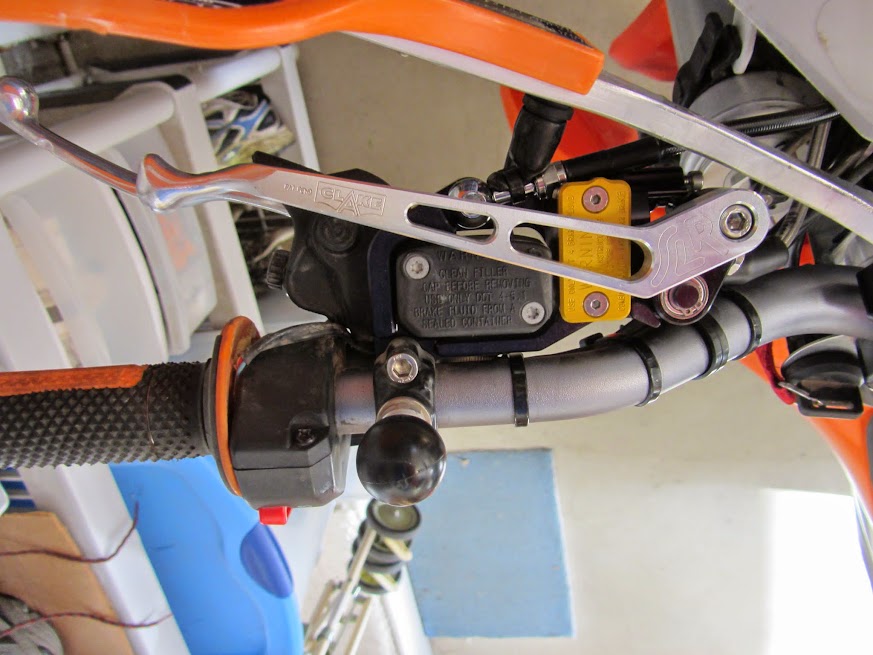 Mount the unit so that the reservoir cap is level.  You can adjust it for rider comfort after you finish bleeding the system. Remove the lever from the assembly for easier access to the reservoir cap. It took me about five tries to get the Rekluse LHRB system free of air bubbles.  Air can easily be trapped at any of the banjo bolts, the foot pedal plunger, or at the hand lever plunger.  Learning from that experience, I reverse bled the system this time, which worked much better. I had my son watch the Clake reservoir, ready with a syringe to suck out the brake fluid as I pushed it up from the bottom.  I used a second syringe, filled with brake fluid, to push fluid up the line from the brake caliper, past the foot assembly, and up to the hand lever.  Since the lower part of the line already had fluid, this prevented air from entering the existing brake line or caliper. I continued to push fluid up the line while tapping the foot brake lever, the hand lever, and tapping and wiggling the brake line.  I repeated this process until we stopped getting air bubbles out of the system. I then tightened up the caliper bleed screw and topped off the reservoir before putting the cap back on. I am not 100% certain that I got all of the air out of the system.  The brake works much better (stronger) than the Rekluse brake, but it still seems a little weaker than I expect.  But I think I am experiencing “springiness” rather than “sponginess”.  In other words, the brake rotor is flexing, which causes some give in the brake lever.  But even with this springiness I can lock up the rear wheel with a single finger on the lever. The next step is to adjust the levers for best comfort and access.  It took a little fiddling to get it where I wanted it.  The idea is to use your index finger on the brake lever and your two middle fingers on the clutch lever.  This is new for me, so it will take some getting used to.  But after one day of riding with the new system I am pretty happy with it.  It is particularly handy on gnarly descents – especially when I panic and put my feet down.  It is also great while sitting and cornering. 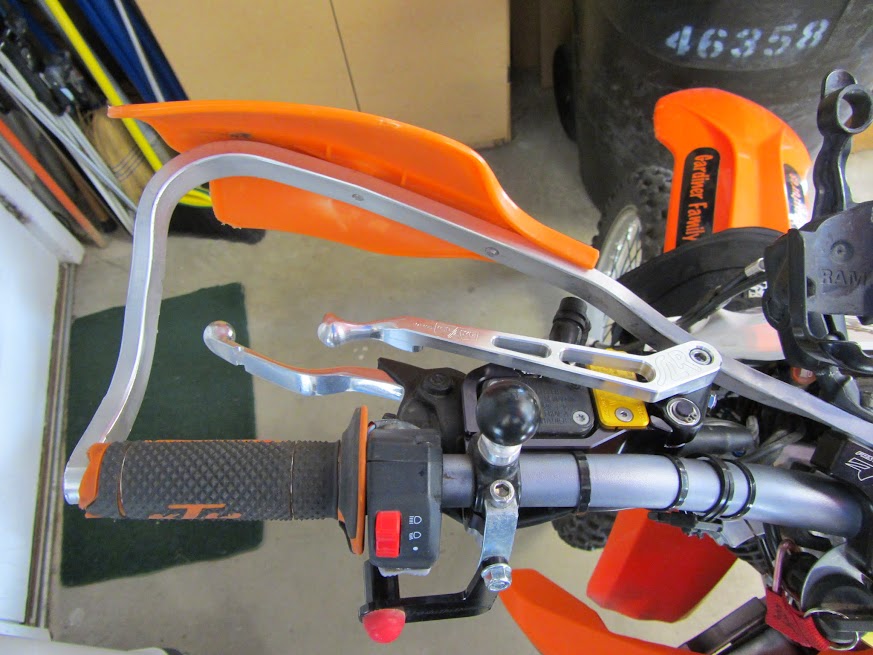 Conclusion At first I was concerned about the stability of Clake since they never responded to any of my email queries.  But now that I have the system in place, I am very happy with it.  I think Clake is an honest company – they are just overloaded with orders.  For a small company, I suppose that is a good thing.