Posted on July 2, 2014 by gardinerfamilyadventures

It has been several years since we did a trip to the Payette River system in southwestern Idaho. We decided this would be a good year to go again so that our family and friends with young children could once again get on the river. We had 22 adults and 7 children, including the Gardiner’s, Isaac Lloyd’s family, Barry Lloyd’s family, the Luikart family, the Wolfe family, Wade and Hannah Robins, and a few friends.

It rained almost the entire time as we drove up there, so we were a little nervous about camping conditions with young children. Luckily it stopped before we arrived at the Hot Springs campground just east of Garden Valley. It was hot and sunny for the remainder of our trip. 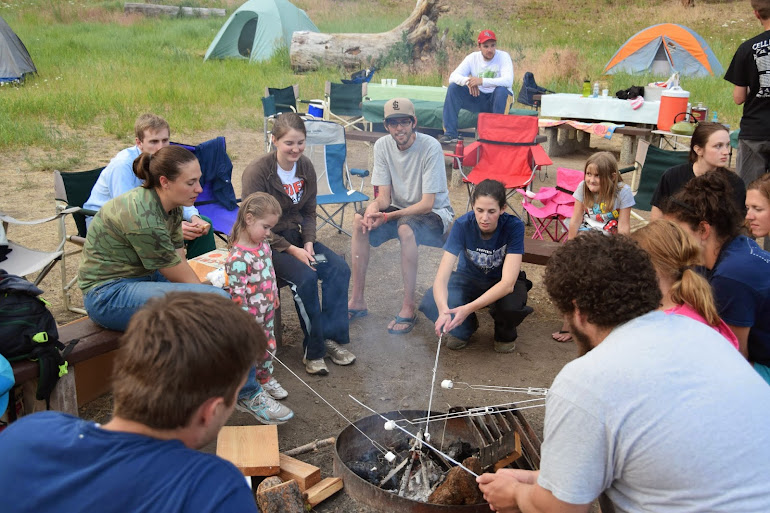 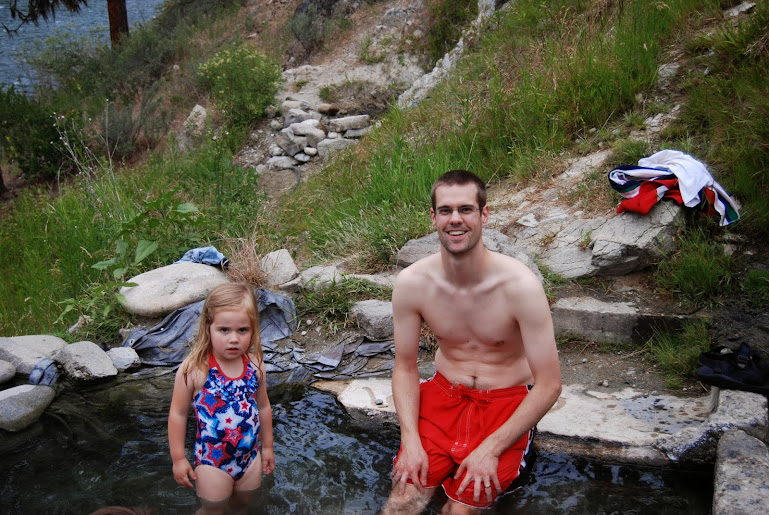 The hot spring near camp

We set up camp and then did our first run on the Main Payette from Banks to Beehive Bend. We did several other runs on the main throughout the week, and one run on “Old Swirly” on the South Fork, and one run on “Cabarton” on the North Fork.

We had three rafts (Gardiner’s 14’ paddle boat, Barry Lloyd’s 16’ paddle boat, and Layne Lloyd’s 16’ with a rowing frame for hauling the children), two 2-man inflatable kayaks, and one hard-shelled kayak for Isaac. 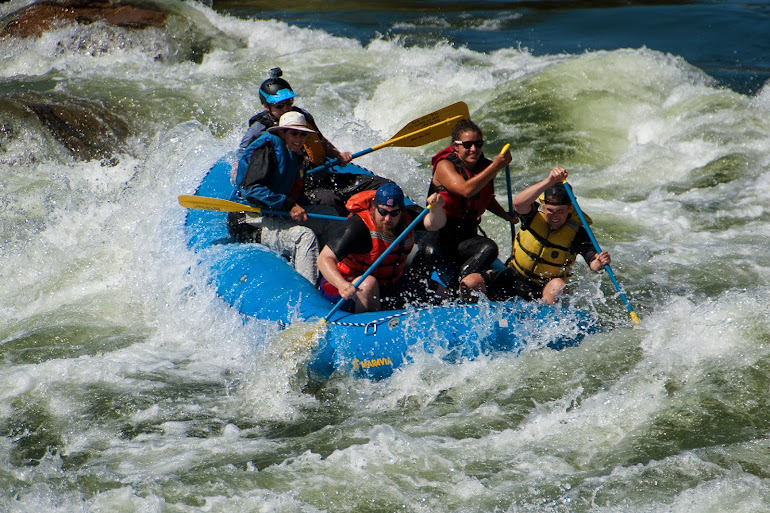 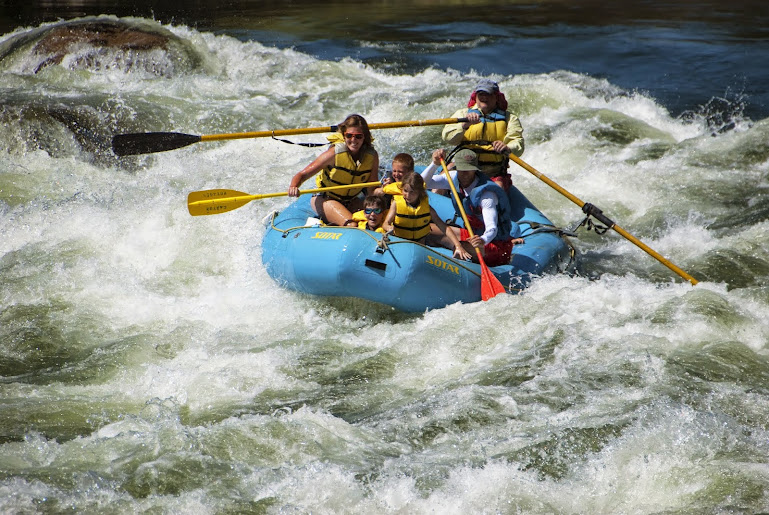 Layne at the oars 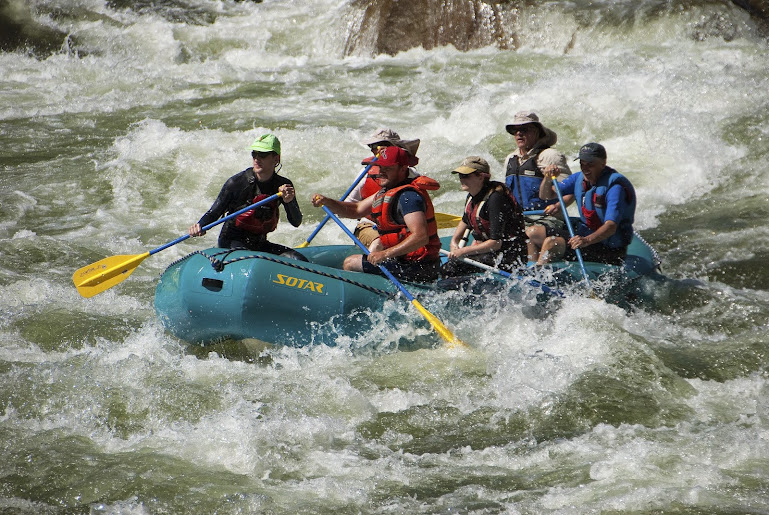 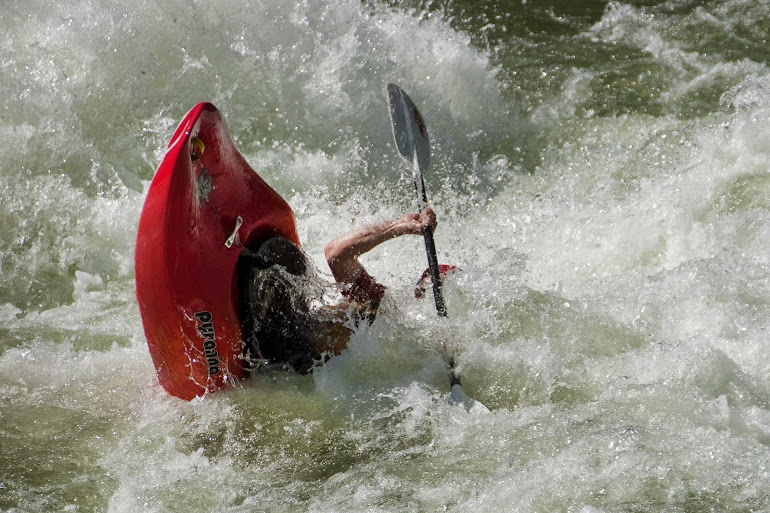 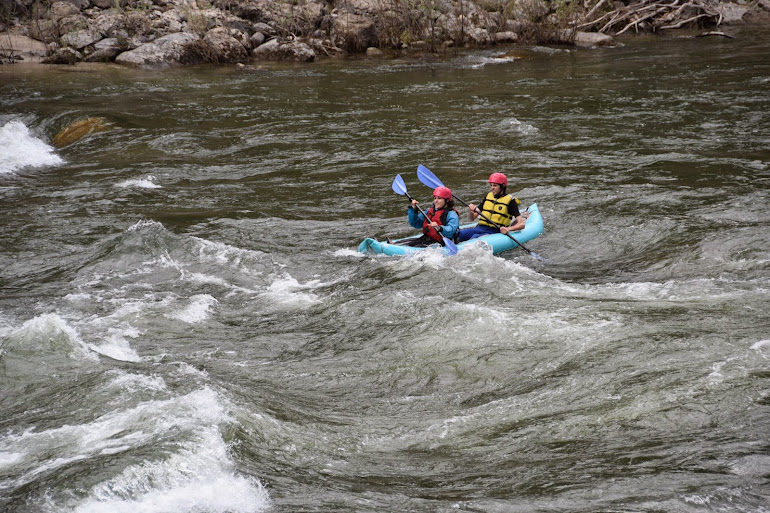 One of the inflatable kayaks

The water levels where lower than previous trips, but we still had some really fun waves. 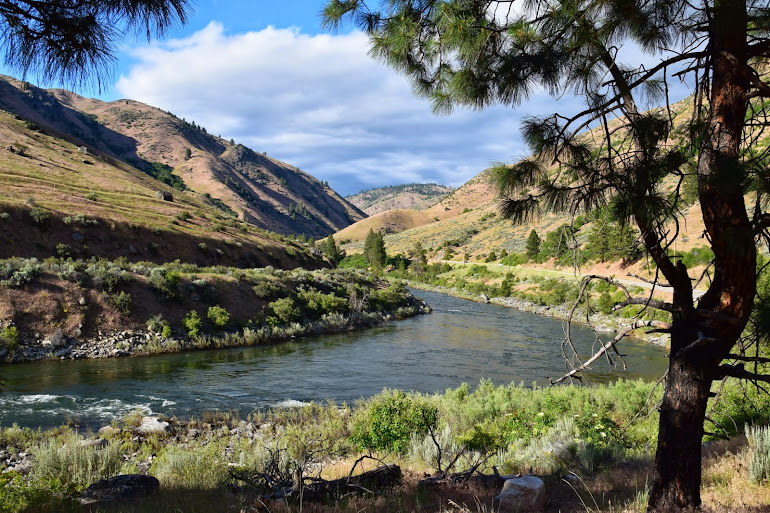 The best rapids were Surf City (now renamed “GLOYF” (go left or you’re fired)), Mixmaster, and AMF. We had a few people fall out of the rafts and the inflatable kayaks flipped over a number of times, but everyone had a nice safe swim. 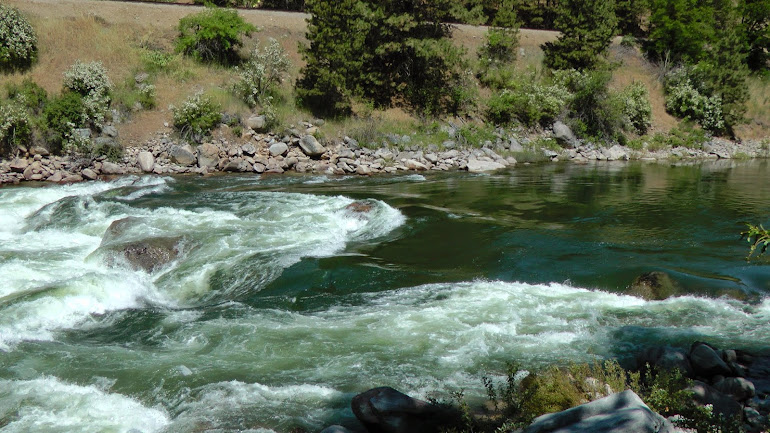 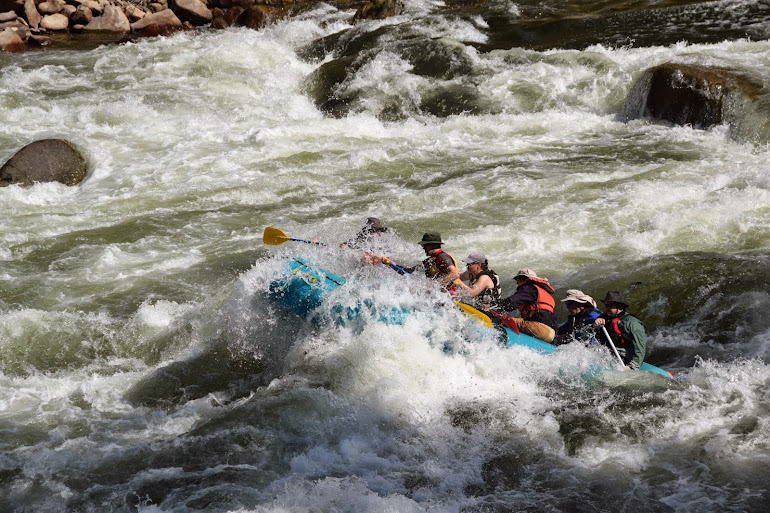 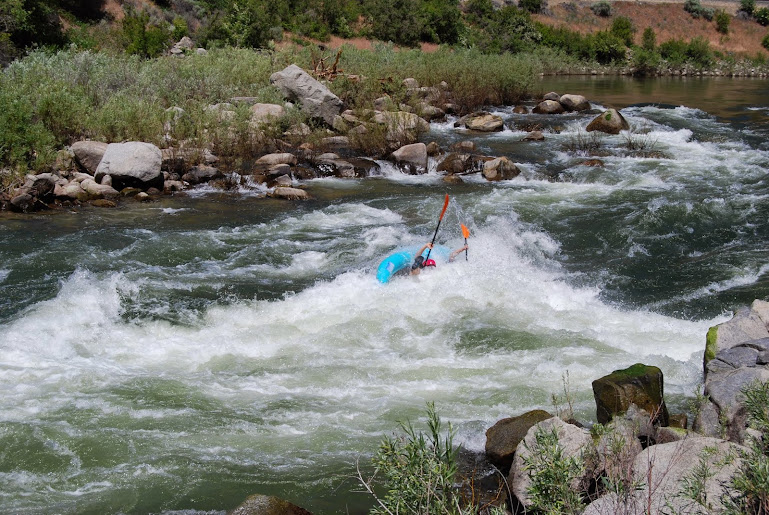 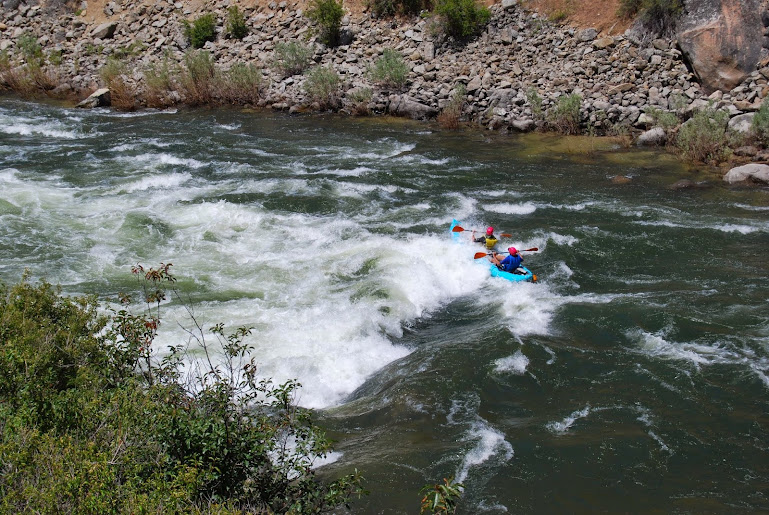 Old Swirly was a very relaxing and scenic float. It has a very steep ramp at the put-in, but there is a nice current that keeps you moving along, so you can chat and enjoy the sights while you float along. 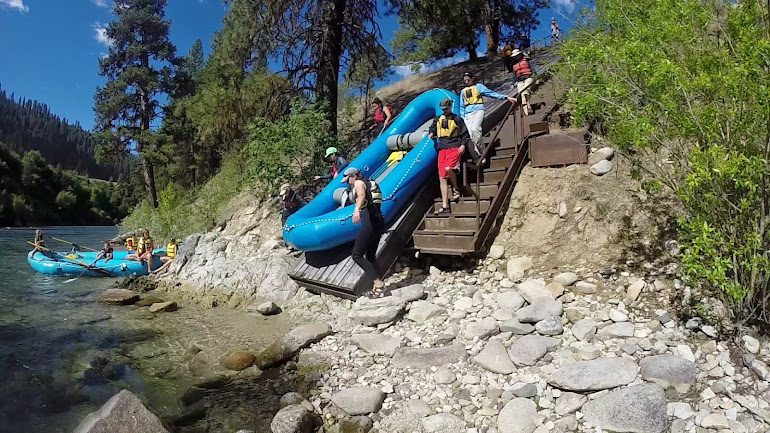 The put-in for Old Swirly 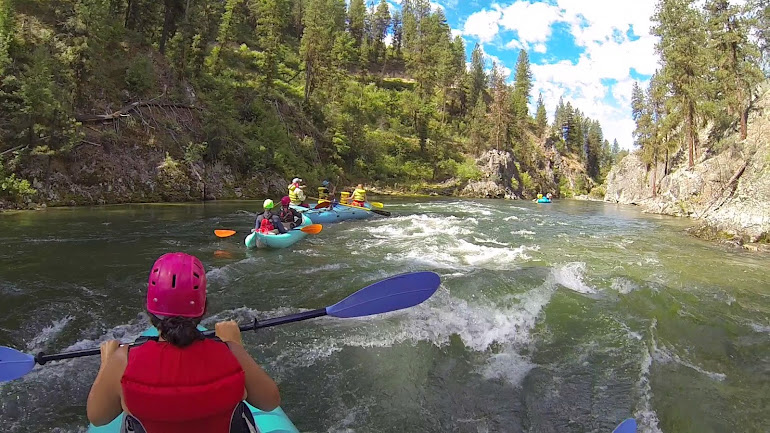 The “swirly” section is similar to “Coffee Pot” on the Rogue, but not quite as powerful. This section did prove a little challenging for the inflatable kayaks, but not as bad as prior years when Kevin took a long and scary swim. 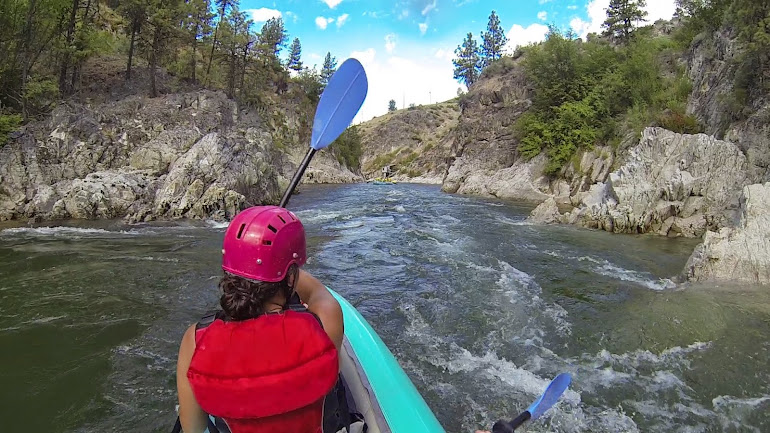 We were able to briefly stop near camp and pick up the younger children to take them the remaining easy three miles to the take-out. As we loaded Sophie onto the boat, she said; “but I am still two”. Her parents told her she needed to be eight to go on the river. She was not content to just sit and play in the raft – she had to paddle just like everyone else. She did a great job holding onto her paddle for almost the full three miles – even when the current would try to pull it away from her. 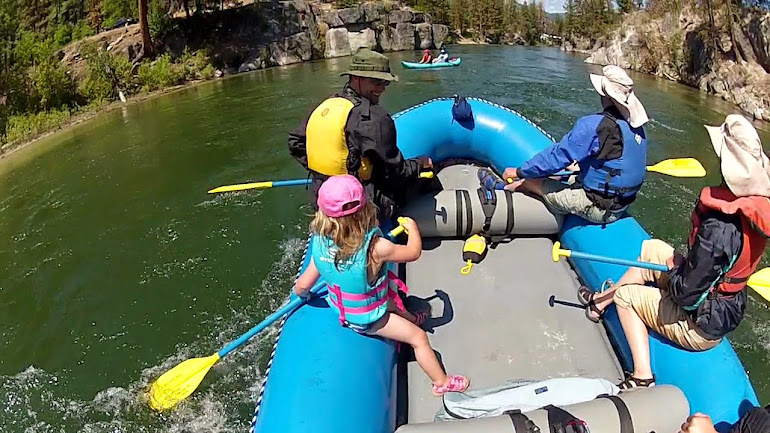 It is a long drive to run the Carbaton section, but it has the largest and wildest rapids of any section we are willing to run. It was a beautiful day and there were quite a few people on the river. Nevertheless, we were able to launch quite quickly and be on our way. There are a few long and boring flat-water sections, but the reward is the fun waves in the three largest rapids; Trestle, Francois, and Howard’s Plunge. 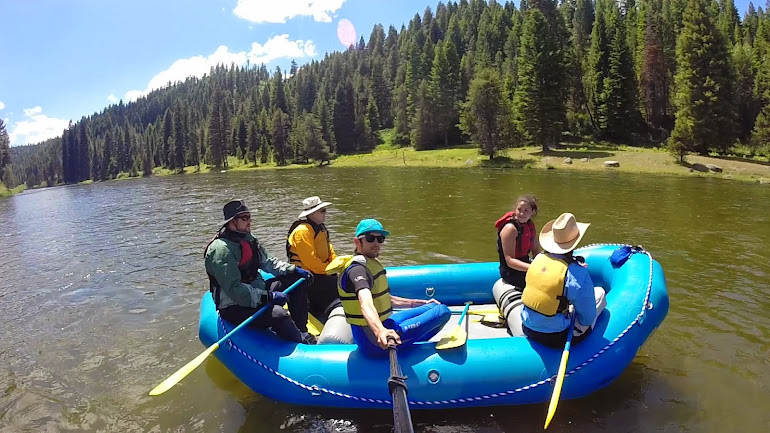 Flat water on the Cabarton section 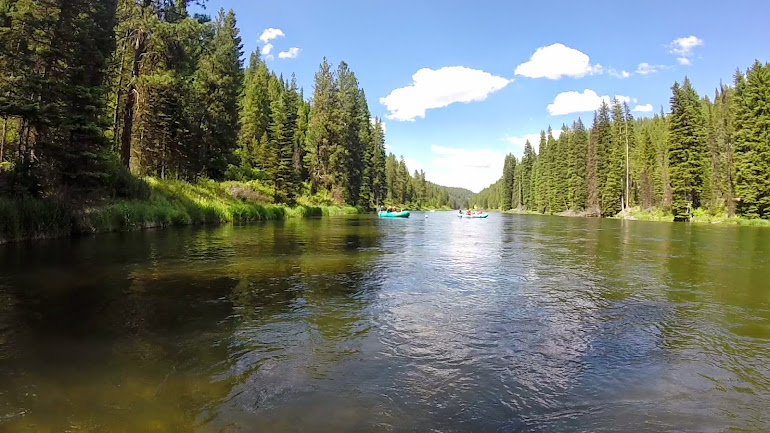 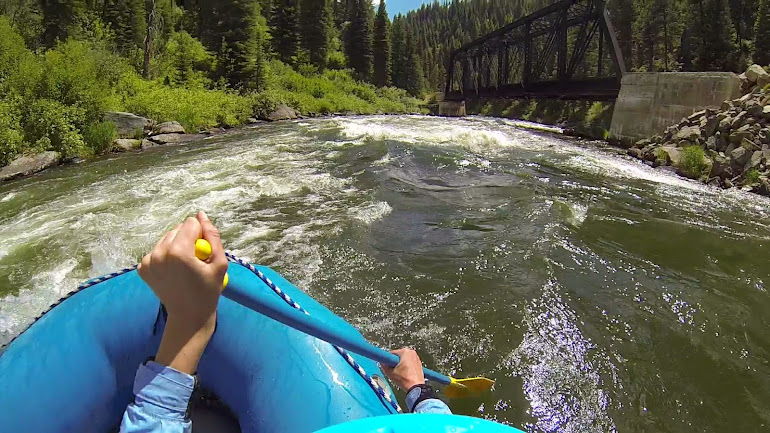 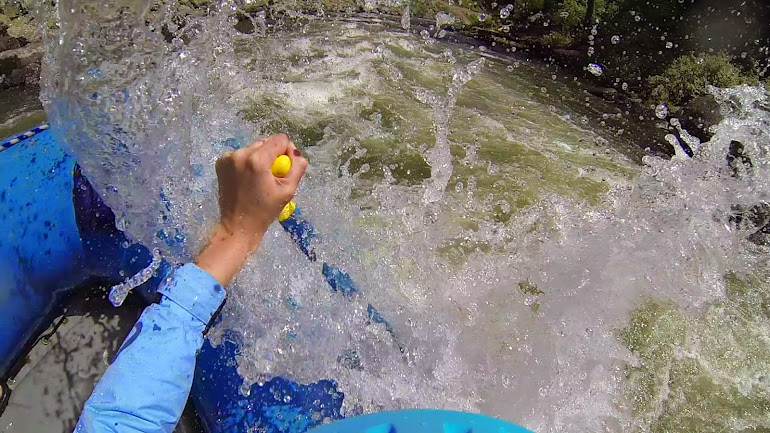 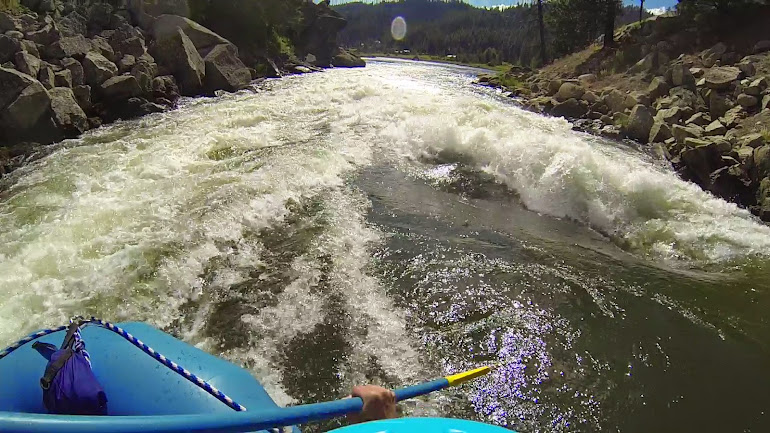 The tongue of Howard’s Plunge looks much larger in person 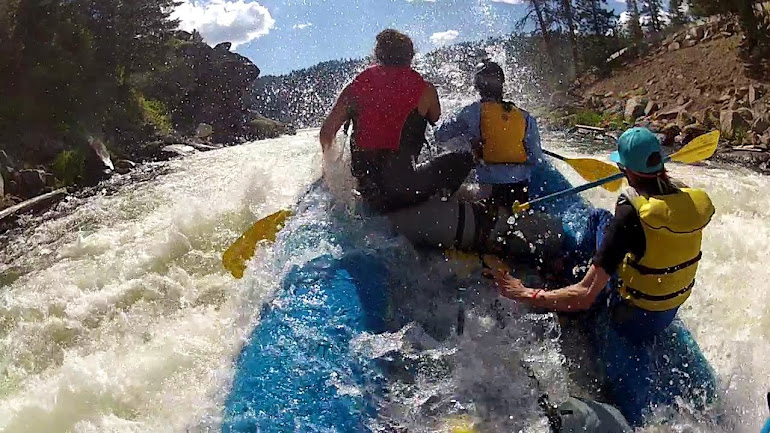 Riding the waves in Howard’s Plunge 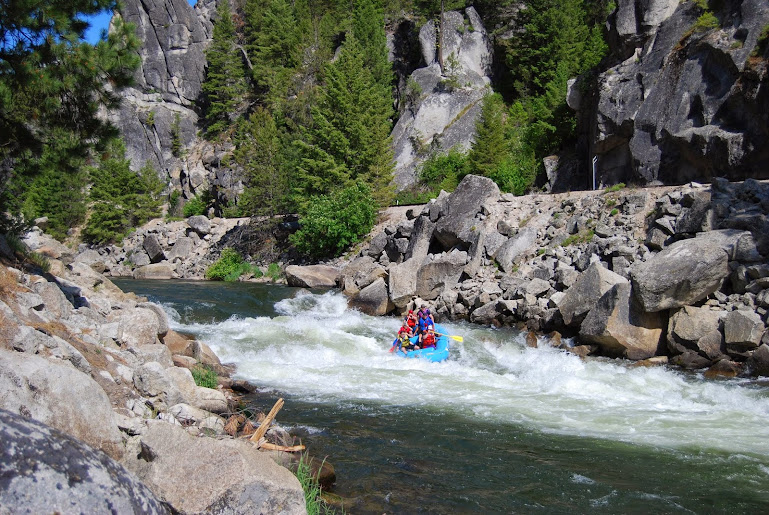 The Luikart crew in Howard’s Plunge

We did one final run on the Main section Saturday morning, followed by lunch, and departing the campground by 2:00 PM.