Posted on May 24, 2014 by gardinerfamilyadventures

I previously reported on how to choose a dual-sport bike, and how I converted my KTM 350 xcf-w to a street legal dual-sport.  My next project was to enable my bike to carry camping gear so I can go on a multi-day adventure ride with friends and family. I did a lot of research via the Internet and talking to friends with adventure camping experience to help me in this quest.  This report summarizes the lessons I learned.

My friend Bob has mastered minimalist adventure riding.  He can camp in comfort on his KTM 640 Adventure bike, but he also enjoys going super light on his KTM 300 two stroke.  When camping on his two stroke, he uses a tank bag and a backpack.

My friend Ross is at the other end of the spectrum.  He rides a KLR650 which we have dubbed the “super tanker”.  He is able to carry a lot of gear.

I intend to be somewhere in between.  I don’t want to be a minimalist.  At my age, with sleep apnea and recurring back problems, I want to camp in some degree of comfortable.  If I am miserable, I won’t want to go again.  But I also want my bike to be reasonably light and handle okay.

Most of my camping is done on multi-day river trips.  I often tell people that river running is a wilderness experience like backpacking – only we eat good.  Camping gear bulk and weight isn’t a big factor.  Therefore, most of my camping gear is too bulky and heavy to be used on an adventure ride.  I have gradually been trying to overcome that problem.

I started by buying a smaller tent.  Not super small, but small enough to fit nicely on my bike.  I really like the design of the Exped Gemini series tents.  I originally considered the 3-man tent, but decided to down size and bought the 2-man version once I found it on sale. 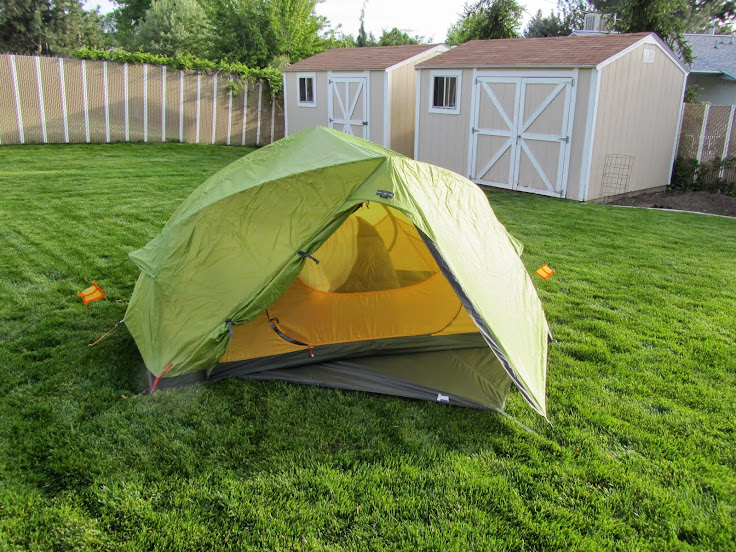 I already had a nice Big Agnes down sleeping bag, but the stuff sack is 8″ x 20″, which is way too big.  I bought a standard compression dry bag, but that made it about the size of a soccer ball, which didn’t fit in any of my pieces of luggage.  I then found an Exped compression sack that squishes the diameter of the bag rather than the length.  It now fits nicely in my Giant Loop Coyote bag or along side my tent in a dry bag.

I also picked up a Big Agnes Q-Core air mattress.  It is a little bulkier than I would like, but it is a lot smaller than my 3″ foam pad that I use on river trips.

Because of my back problems, I wanted a compact camp chair.  So last year I used my REI dividend to pick up an REI Flex Light chair.  I found this chair to be a little weak for my weight, so I will let my children use it.  I decided to buy the Big Agnes Helinox chair, with is a little stronger and wider.

I also needed compact cooking gear.  I ‘borrowed’ my son’s backpacking stove he got when in the Boy Scouts, and picked up a Soloist GSI cookset.  I think I now have enough gear to make this adventure dream become a reality.

One of the first questions is that of fuel range.  The stock 2.25 gallon tank would probably give me a range of close to 100 miles on a dual-sport type ride, but that probably isn’t enough.  I didn’t want a really big tank (especially when I can siphon gas off Ross with his super tanker), so I opted for a 3 gallon tank, giving me roughly a 150 mile range.

I first installed an Acerbis tank, but it has an offset fuel cap which made it really difficult to mount any of my tank bags.  The Enduro bag is small enough that it can work when mounted on an angle, but the other bags just didn’t work at all. 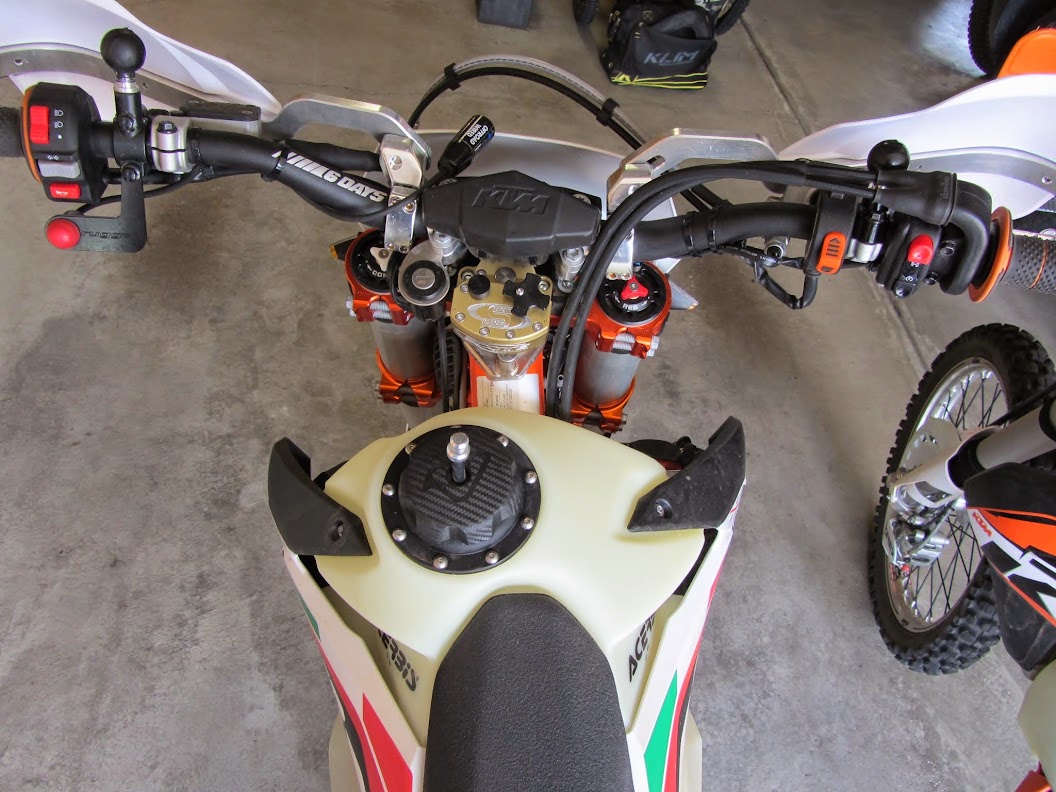 So, I sold the Acerbis tank and bought a 3.1 gallon Clockworks tank. 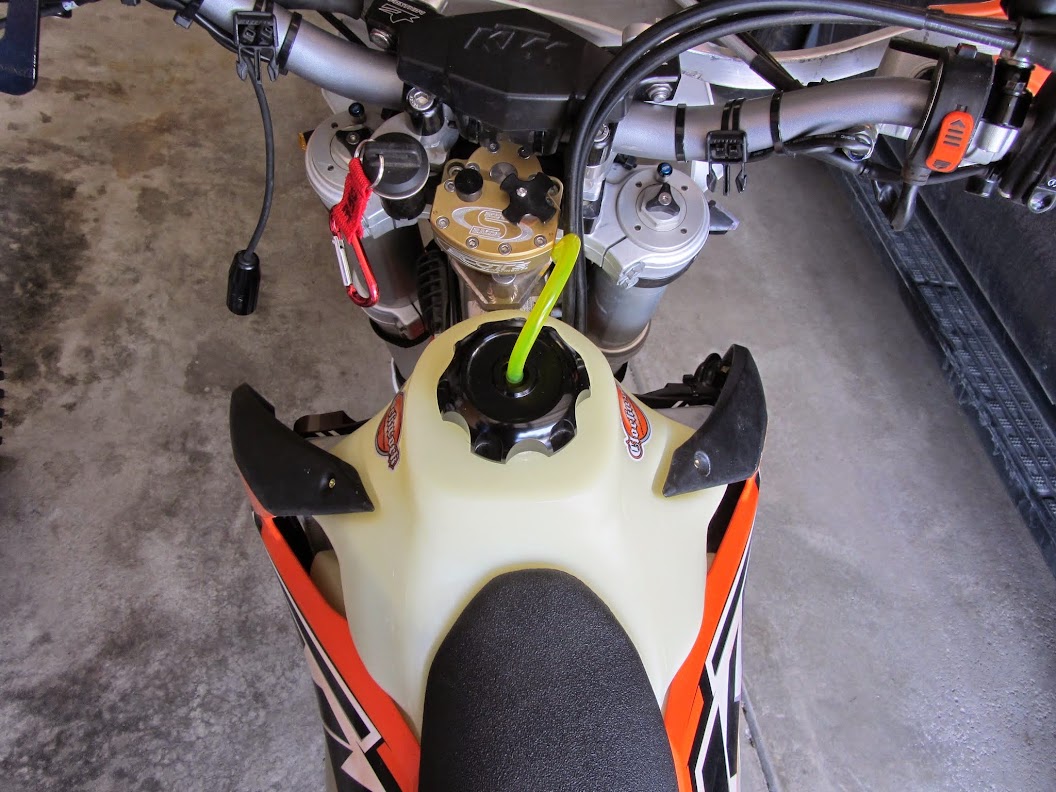 Tank bag fit still isn’t ideal because of the volcano-like top – but it works.  In fact, the curved seat-to-tank allows the bottom of the tank bag to sag a little, giving me just a little more interior space. 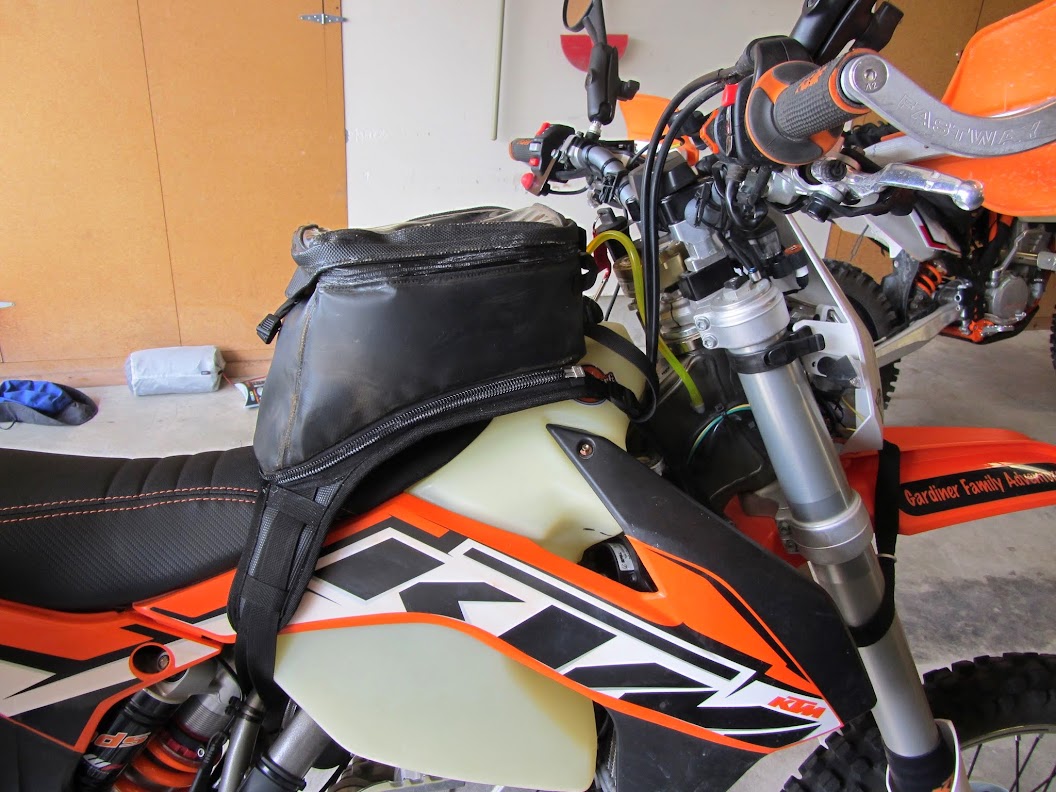 One of the downsides of the Clockworks tank is that it interferes with the thermostat.  I ended up spending more money to buy some thermostat bypass hoses.  And then after a few months of use, the banjo bolt fuel line connector started leaking.  So, I decided to buy the KTM 13L tank (~3.5 gallons).  I should have just bought this one in the first place.  It mounts up really easily, it has a low and centered fuel cap that uses the stock 1/4 turn fuel cap.

I bought a Wolfman E-12 saddle bag to use for both over-night and day trips. I was able to test it out on our recent ride of the White Rim trail in Canyonlands.  It was nice to get some weight out of our hydration packs for such a long ride, but the saddle bags filled up much quicker than I expected.  I was able to carry lunch for Jamie and I, as well as some tools.  The only time I even noticed it was there was when mounting or dismounting the bike.

But I encountered a problem throughout the day.  The lower mounting strap would slide up the frame, working its way in between two separate pieces of plastic.  This made it really difficult to get the bag mounted tight enough to not slide around.

I solved this problem by mounting a lash tab on each side of the bike.  This required me to drill a small hole in each sub-frame member.  Hopefully that won’t cause a serious strength problem. 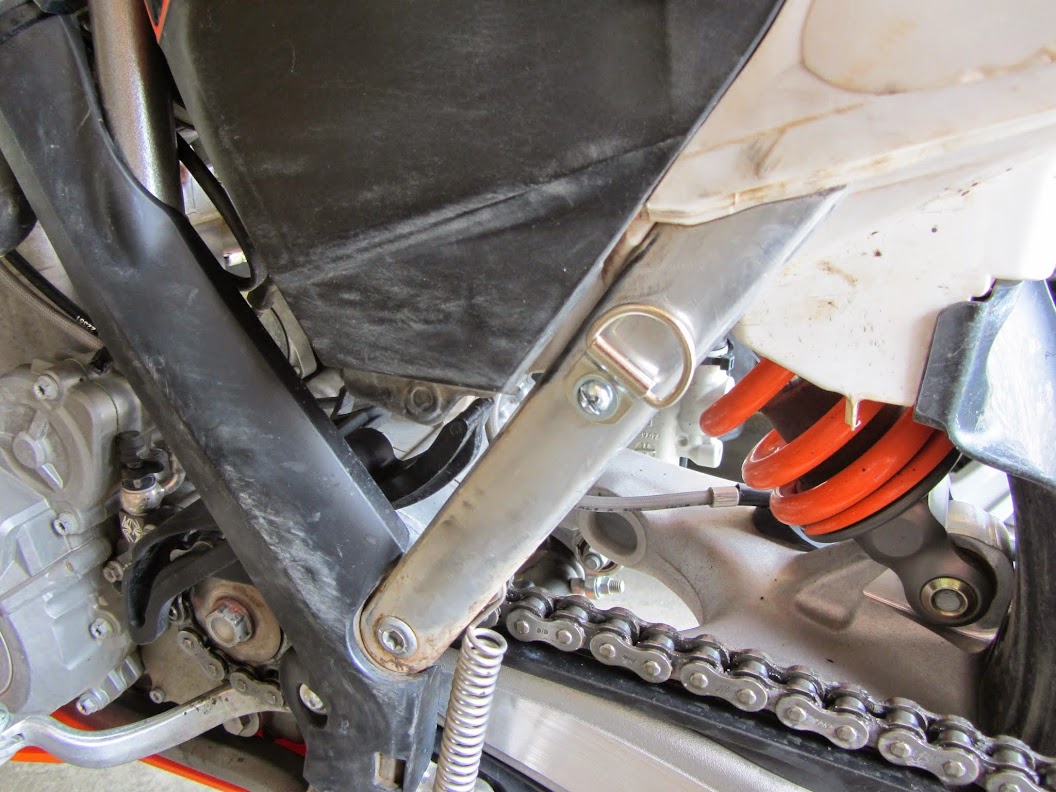 The lash tab allows me to really cinch down on the straps and get them super tight. 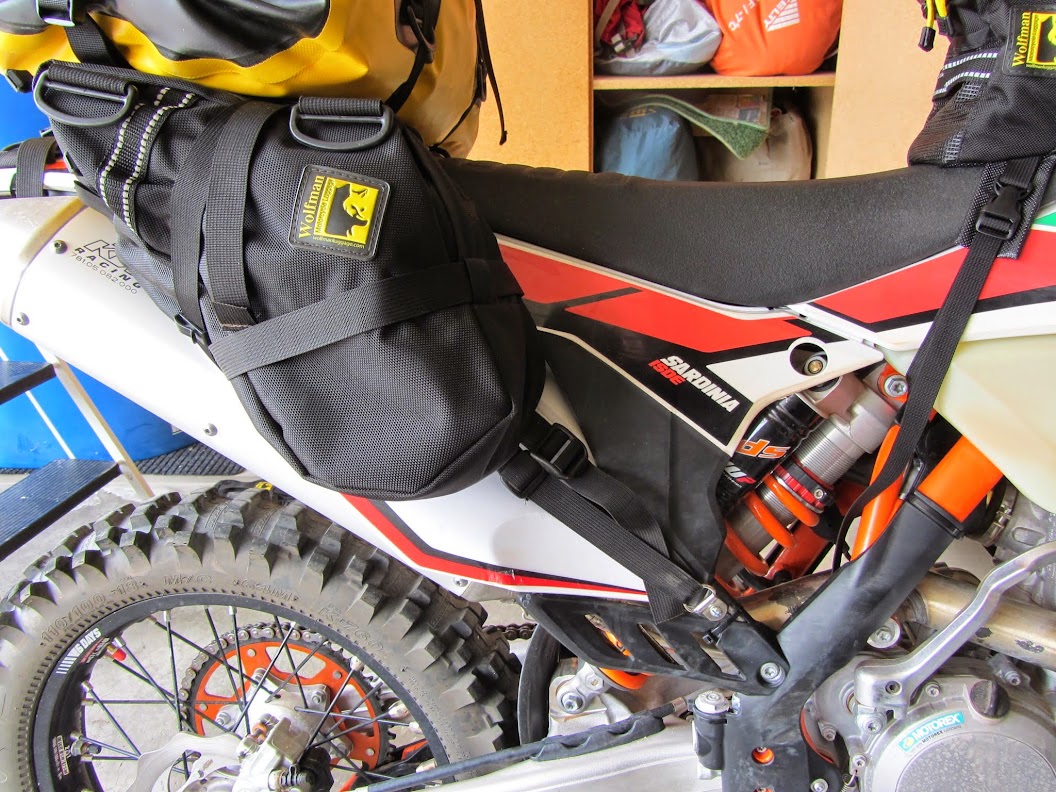 Update: On my first adventure ride I found that the right side Coyote bag rubbed on my leg but the left side did not.  This is because the right D-ring is further forward than the left.  To remedy this, I used a scrap of aluminum and built an offset bracket for the right D-ring.  My only concern is that my boot may snag on it. 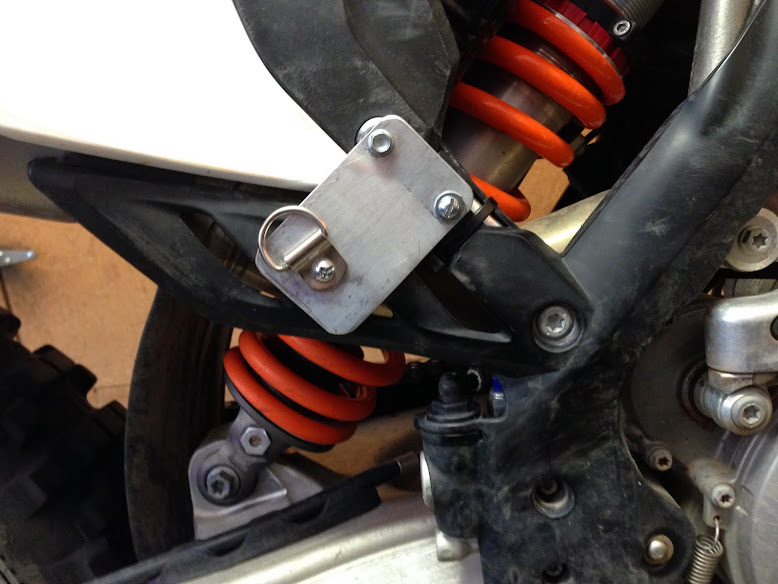 I also mounted some Footman Loops on the rear fender so the fender hooks would be more secure.  The molded edge of the KTM fender makes it difficult to get a secure fit with fender hooks.  This solved the problem very nicely. 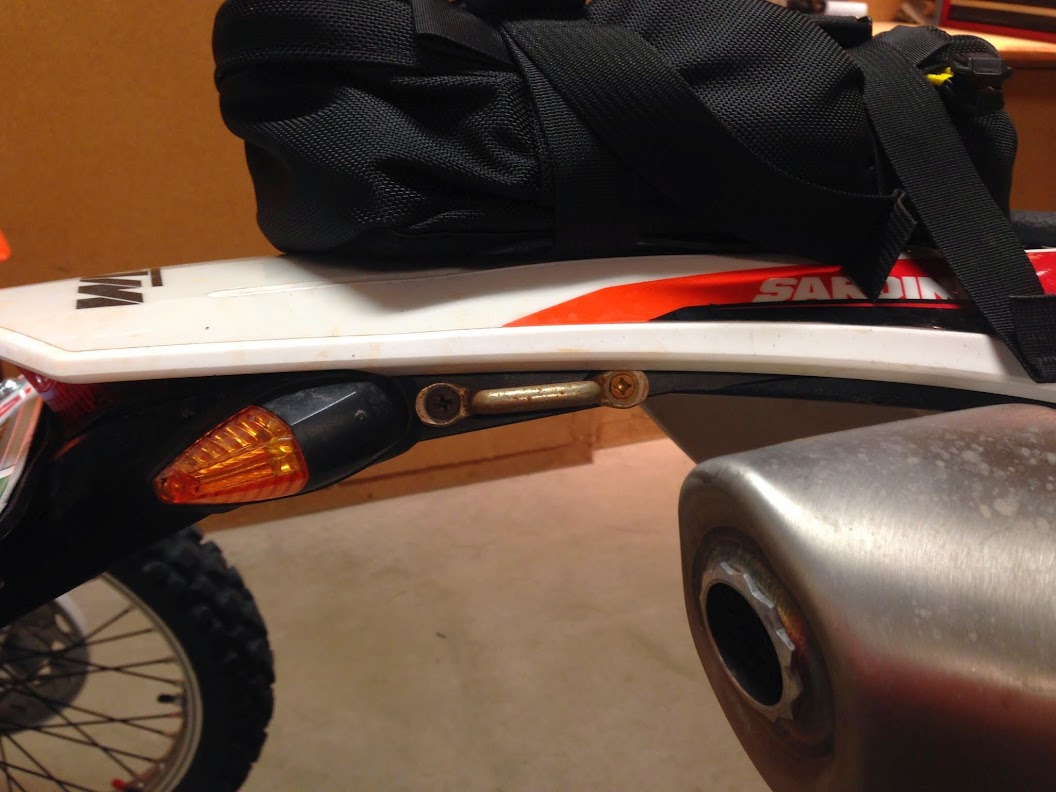 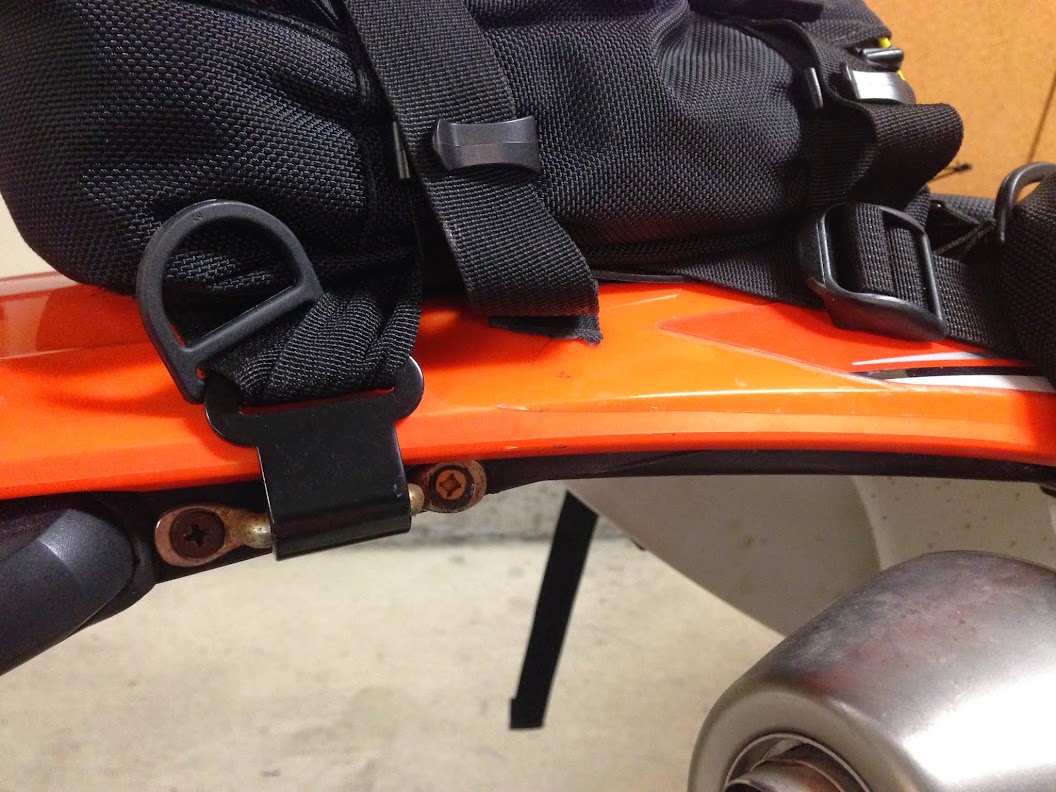 Another crucial bike upgrade is a more comfortable seat.  I don’t mind the stock seat for trail riding, since I stand much of the time.  But for a dual-sport ride, the stock seat gets old really fast. 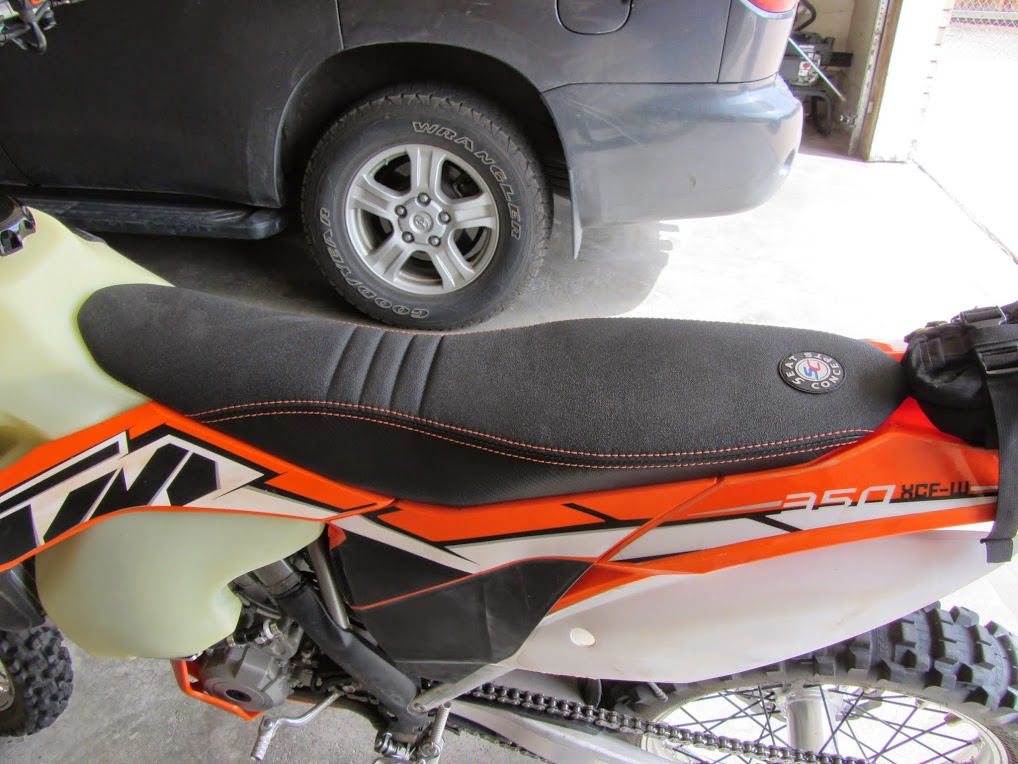 I tested out the new seat on a single track ride last weekend.  I was surprised at how much I loved it even on a technical ride.  It is so much more comfortable than the stock seat.  I am sure that my rear end will still get tired on a long dual-sport ride, but this should be a lot better than stock.

I also intend to change the gearing for dual-sport rides.  The XCF-W comes with 13/52 stock final gearing, while the street legal EXC comes with 14/45.  My intent is to split the difference and change the front sprocket to a 14T, giving me 14/52 gearing (which is standard on the EU/AU models).  I can do this without modifying the chain length.

With the 13/52 gearing, I find that at about 45 mph I want to shift up to a higher gear.  I can ride comfortably at about 55 mph, and for a short time I can push it to 65 mpg.  The bike will go much faster, but the motor is really wrapped up.  The 14/52 gearing ought to bump each of those numbers up by almost 5 mph.

Update: The 14/52 gearing worked pretty well for an adventure ride as long as I didn’t need to go faster than 60 mph.  One my first adventure, I had to ride down a canyon with traffic that was going 65 mph in spots.  I could do 65, but it was really pushing the bike and I was beyond my comfort zone.

This got me wondering why I can easily go 75 mph with my Husaberg FE-450.  I thought it had the same transmission as my 350, and it also has stock 13/52 sprockets.  So, I added the Husaberg to my spreadsheet as well as the primary gear.  I was surprised to learn that the FE-450 had a wider spread on the gears AND a taller primary gear.

Gear ratios compared with my Husaberg

Notice that the Husaberg’s 1st gear is almost as tall as the 350 EXC and 6th gear is even taller.  I was surprised that 1st was geared so high.  I guess the 450 has the power to pull such a tall gear.  But this clearly explains why I can do 75 on the Husaberg but not on my 350.

I also tried the 14/52 gearing on some single track.  It worked fine in the easy sections, and gave me a comfortable riding speed in 2nd gear.  But it was noticeably harder to loft the front end, and I was wanting quicker power response on long, steep climbs.  13/52 is definitely better for tight trails (for me anyway).

The bottom line is that the 14/52 gearing is a reasonable compromise.  You loose some power for steep climbs and lofting the front end, but you pick up some top end for the pavement.  I prefer the stock 13/52 for pure trail riding.

Update 2: After further evaluation my daughter and I both concluded that 1st gear with the 13/52 sprockets is too low.  On long steep climbs we were always wanting something in between 1st and 2nd gear.  But I also found that 1st with the 14/52 gearing (which is roughly equivalent to 13/48) was too tall.  Thus, I have concluded that for technical trail riding 13/50 gearing would be more appropriate.  Based on significant Internet research, this seems to be a very popular choice.

So my plan going forward is to use 13/50 for technical trail riding (which is what I do most of the time).  This should give me a more usable 1st gear for trail riding.  For multi-day adventure rides, where we tend to cover a lot of ground but avoid very technical trails, I will change to 14/50 gearing.  This should give me a more comfortable ride at 65 mph.  It is also worth noting that regardless of the gearing, going above 65 mph on such a light bike – especially with knobby tires – is beyond my comfort zone.

I have evaluated three different luggage options that work for bikes without a rear rack.  Read my report here.

I finally got to actually test my adventure setup.  We spent 3 days, 2 nights out in the Uinta mountains.  It turned out to be a pretty thorough test because we got rained on (while riding and camping), had cold temperatures, and hot temperatures.  We covered approximately 300 miles.  Here are some of my observations:

All in all it was a very fun experience and I was extremely pleased with the performance of my gear.  My tent, air pad, sleeping bag worked perfectly, as did my camp chair and kitchen setup.  I will make a few minor adjustments to the saddle bag mounting hardware, but for the most part things worked great.