Posted on October 13, 2013 by gardinerfamilyadventures

On my first ride with an auto clutch I was wishing I had a left hand rear brake (LHRB) for finer braking control – especially on steep downhills.  So, I decided to try one out.

I ordered a Rekluse brake kit from Rocky Mountain ATV.  I took the seat and tank off, disassembled the rear master brake, and then found that I ordered the wrong kit.  By mistake I ordered a Nissin brake kit (for Japanese bikes) instead of a Brembo kit (for KTM/Husaberg).  So, I had to put the bike back together and swap out the incorrect parts.

The next morning I called Rocky Mountain ATV, and they called Rekluse and arranged to have a Brembo master sleeve shipped directly to me, along with a return shipping label so I could return the Nissin sleeve.  Talk about great service!

As with the auto clutch, it is worthwhile to watch the Rekluse installation videos posted on their website.  Details may vary based on the brand and model bike, but the videos give you a good idea of what is involved.

The kit includes a sleeve that basically converts the master cylinder into a section of pipe.  It allows you to connect a second banjo bolt so you can operate the brake from the foot pedal or the handlebar lever.

If you look closely in the following photo you can see both banjo bolts.  The blue one is the standard foot pedal banjo.  In this case it is a hydraulic brake switch for the brake light. 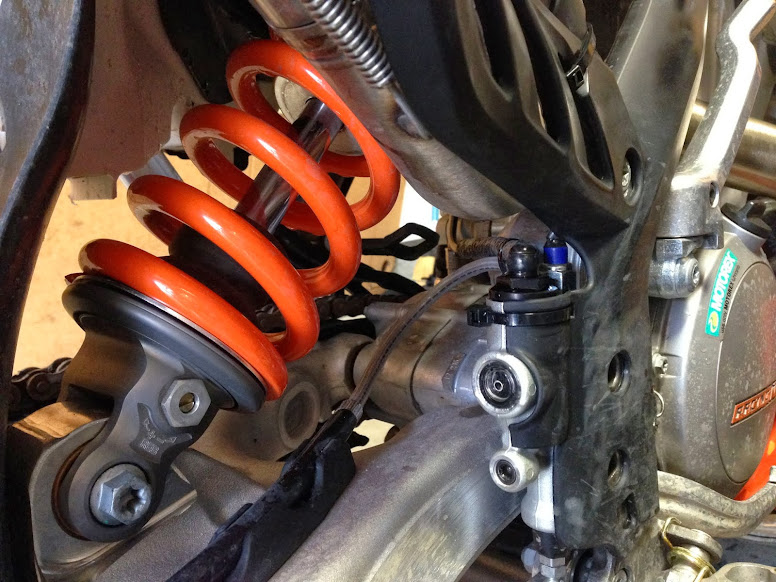 NOTE:  You can see a bubble in the master cylinder window.  Many people think this indicates that the line has not been properly bled, but that is not the case.  The sleeve insert bypasses this window, so it is not even in the circuit.  The bubble is just from residual brake fluid in the cylinder.

Installation Of The Brake Levers

Installation of the new brake lever is one of the challenges.  Not that it is hard to install, but it is hard to figure out where to put it and how to align it.  At first I wanted the brake lever underneath the clutch lever, but it just didn’t fit very well.  So, I ended up installing it above the clutch, as shown in the next two photos. 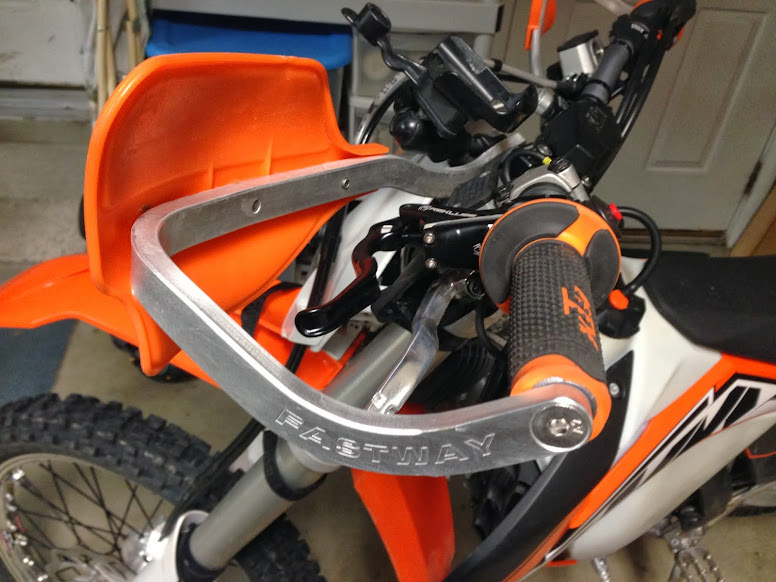 LHRB above the clutch lever 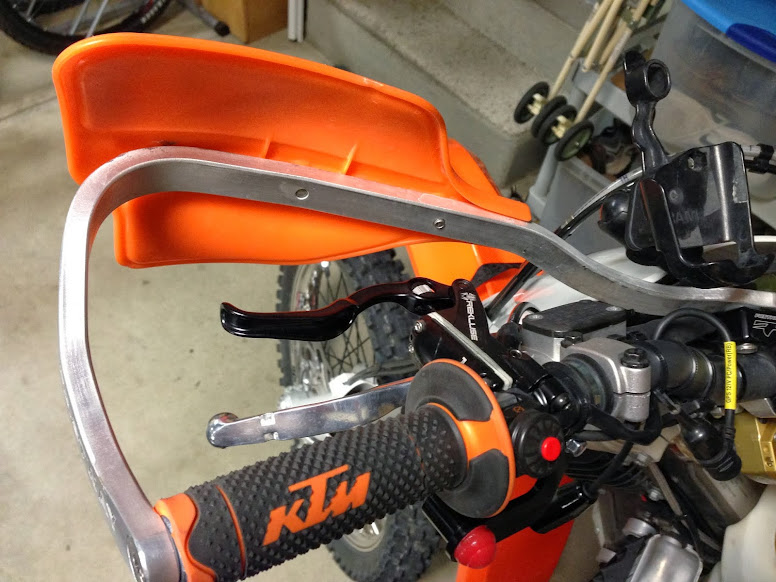 Alignment of the levers turned out to be a compromise.  I had to put the clutch lever down really low (which allows it is protrude below my hand guards) in order to get the brake lever at a usable orientation.

The brake lever is higher than I like, but it can be used while standing or sitting.  I found that by aligning the right hand front brake to match, it was much easier to remember which lever to grab.  Now both brake levers are aligned the same, so it is much like riding a mountain bike.

With this dual lever setup, I found that I took more advantage of the auto clutch by not using the clutch lever very often.  I can still use it when I want to, but I generally don’t need to.

I ended up using about 3/4 of a bottle of brake fluid before I was done.  I would fill the syringe, but it would run out before I finished getting bubbles out of the line.  With each new refill, I would probably introduce more air into the line.

After five loads of the syringe, I finally got it bled good enough that the hand lever or the foot pedal could operate the brake, but I think it still feels a little soft.  I can lock the rear wheel on loose dirt (especially on a down hill), but not on hard pack.

I started by doing some simple warm-up drills to get used to the new hand brake lever and the new lever alignments.  I then proceeded out onto some fairly easy trails.  I have not yet tested the setup in an emergency situation nor a very technical trail.  Nevertheless, I found that it didn’t take long to get used to the new setup.  In fact I was surprised how quickly I quit using the foot pedal.

When I traded bikes with my son or daughter, I had to retrain my old brain to use the foot brake and the clutch lever.  Wow – that seems so much harder.  My kids immediately adapted to the hand brake since neither of them ever really learned to use the foot pedal properly anyway.  Now is more like mountain biking.

I was quite pleased with the results, although I am a little nervous about the durability of the new brake lever – it is really just a mountain bike lever and cable.  I hope it will hold up to the rigors of dirt biking.

I was also pleasantly surprised that having the levers backwards from a mountain bike didn’t seem to be an issue at all.  We shall see if I can adapt back next time I go mountain biking.

I was uncertain whether I bled the brakes thoroughly enough, but after riding it for a few hours I compared it with my Husaberg brakes and they feel about the same.  It is slightly harder to lock the rear wheel with the hand lever than the foot pedal, but I can do it – even on hard packed surfaces.

I decided to swap the clutch and brake lever to have the brake lever on the bottom.  On my test ride I found that I mostly used the clutch to start the motor and to make my initial shifts while starting out.  These are all done while sitting on the bike.  Once I get going in a standing position, I generally had my hands on the brake levers – so I wanted them to be in the most comfortable position. 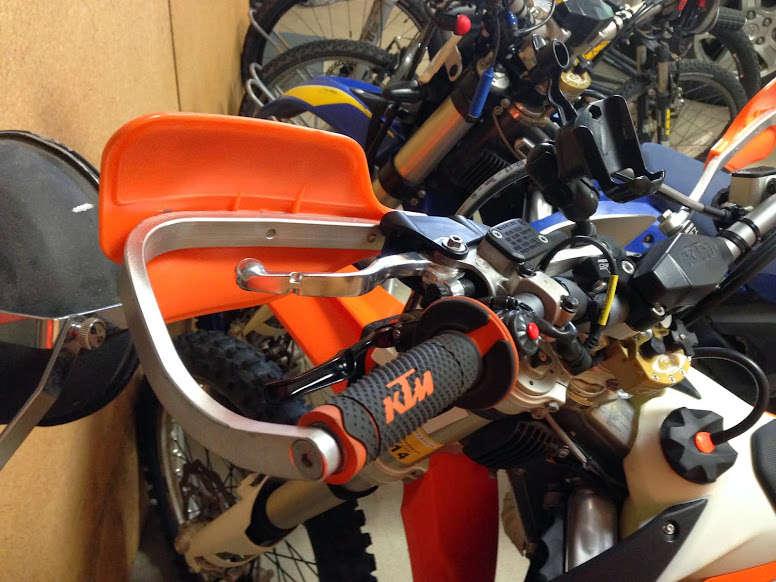 LHRB mounted below the clutch

With the levers mounted this way you need to slide the clutch perch in towards the center of the bike a little bit to avoid interference.  Doing so allowed me to mount the clutch lever just below horizontal, and the brake lever at a comfortable angle while standing up.  This can be seen with this side view. 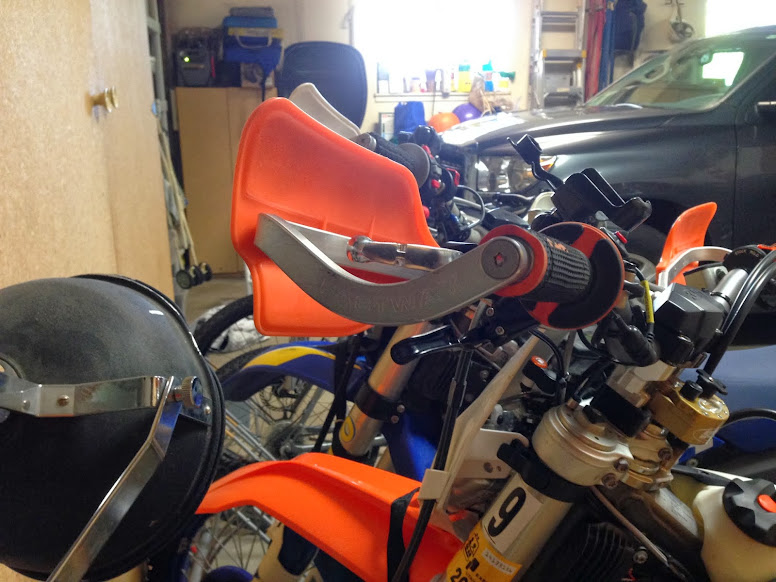 My hand guards interfered with the KTM clutch housing, so I had to grind off the mounts for the stock hand shields. 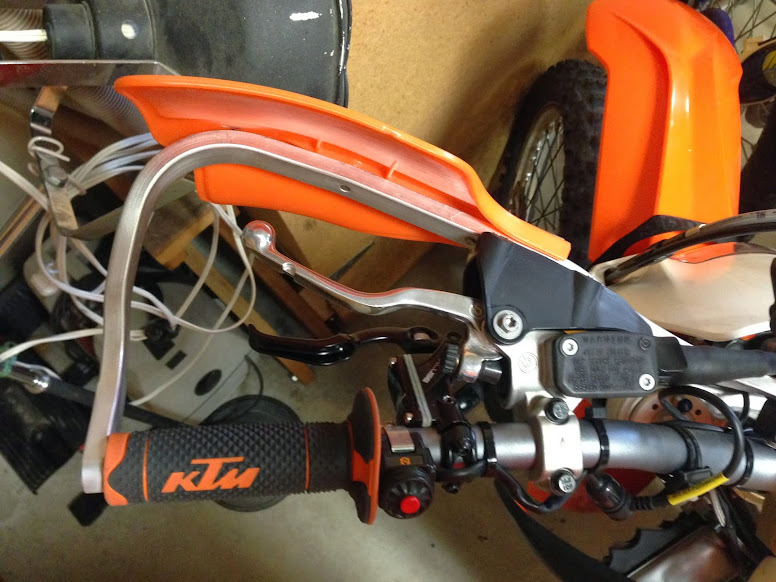 I haven’t yet given this new setup a good test, but I think it will work out well.  With my old setup, the clutch lever hung down below the hand guard, so it could get snagged by a branch.  Both levers are now better protected.  There is also a little more room on the bar for other accessories such as a lighting switch and mirror.

One disadvantage of this setup is that it seems possible, although unlikely (I hope) that in a serious over-the-bars crash my fingers might get caught on the clutch lever.

With the brake lever below the clutch lever I found that it was somewhat like riding a mountain bike.  This was particularly noticeable on steep downhills.  But I also found that it was changing my riding habits, which made it scary to ride another bike.  Plus, anyone that got on my bike would naturally grab the rear brake instead of the clutch.

So, I decided to go back to having the brake lever above the clutch lever.  Furthermore, I have tried to continue to use the clutch lever as normal rather than rely on the auto-clutch all of the time.  Now the auto-clutch only kicks in when I get in technical sections where I should be slipping my clutch but I am not.  And I only use the LHRB on gnarly descents or corners where I want fine brake control.  I can now switch to other bikes without being totally messed up.

If you are considering a LHRB, I would suggest you take a look at the Clake SLR.  It is a little more expensive than the Rekluse, but it looks like a very solidly built unit.  The Rekluse is just a mountain bike brake lever and reservoir, so it is kind of soft for dirt bike usage.  The reviews I have seen indicate that the Clake SLR has more stopping power with just one finger, and it does not add as much clutter to the handlebar since it mounts to the clutch perch.  It does, however, require a different finger usage.  With the Rekluse I can grab either the clutch lever or the brake lever, but not both simultaneously.  With the Clake you can operate both simultaneously if you are pretty coordinated with your fingers.  You use your index finger for the brake, and your two middle fingers for the clutch.  This looks like a much higher quality product.

Rekluse has a newer LHRB that looks much better than the old one.  But I still like the way the Clake mounts better.  The Clake keeps the clutch and brake lever close together and at about the same angle.