Posted on May 18, 2013 by gardinerfamilyadventures

I have noticed over the past few years that two stroke dirt bikes are becoming very popular for trail riding.  I suspect that the KTM 300 is one of the most popular dirt bikes being sold today.

But I am getting really tired of dealing with all of the maintenance required on the newer high-performance four stroke bikes.  In particular, I am tired to dealing with valve issues and expenses.  I am also struggling, as I get older, with the weight of my bike whenever I have to pick it up.

So, I thought it would be nice to try one of the KTM 300 bikes and see what all the fuss was about.  I finally got the chance to try one out on a recent trip to the San Rafael Swell.  I got to ride it for about 45 minutes, as did my son.  I also got to observe the bike in action on a variety of trail types, including some fairly technical rocky hill climbs.  We were able to do some comparisons of a 2013 KTM 300 XC-W two stroke with my 2010 Husaberg FE450.  We also did a little comparing with my son’s 2004 Honda CRF250X. 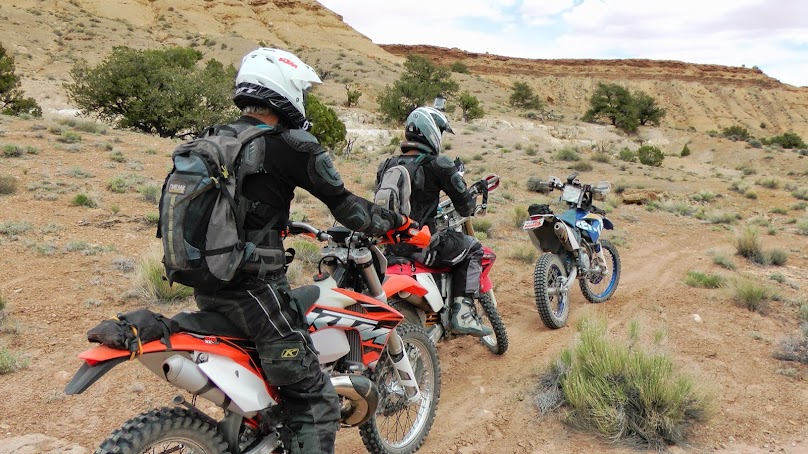 Keep in mind that I am no expert, and your needs may be very different than mine.  Nevertheless, I thought I would share my impressions in case it is of help to anyone else.

Let’s evaluate some of the basic characteristics of each bike…

My 450 is probably only about 20 lbs heavier than the 250, but that 20 lbs makes a huge difference.  The Husaberg actually feels very light while riding it, but when I have to pick it up or load it in the trailer, the weight is about at my limit on strength.  It is especially problematic when I get tired.

The light weight of the 300 also makes it the most nimble of the three bikes.  It is very easy to throw the bike around and dodge rocks or obstacles.  In my limited test, however, I was surprised that the 250 felt almost as nimble.  The 450 wasn’t far behind either, but from what I have read, the 70 degree Husaberg motor design is supposed to offer a more nimble ride than most 450s.

The nimbleness of the 300 is a huge plus when riding tough technical trails or just playing around on the bike.

I have read numerous forum posts about people feeling that the 300 was too powerful and too difficult to handle, so they step down to the 250 or 200.  I did not find this to be the case at all.  Maybe that is because I never ride in the higher rpm range, so I never really got the 300 “on the pipe”.  But for my type of trail riding, the power band was very manageable.

The 250 really lacks in power compared to the other bikes in our informal test.  After letting my son ride the 450 and the 300, he is no longer satisfied with the power output of the 250.

I think the 300 XC-W has the same transmission as my Husaberg.  Both are wide ratio six-speed transmissions.  But the overall gearing of the 300 is noticeably lower than my 450.  I would have to shift up to third gear on trails where second would have worked fine on the 450.  That surprised me.  It also means that your top speed on the 300 is somewhat limited – although that isn’t a concern for me.

I am basically a lazy rider.  With the 450 four stroke, I can often get away without shifting down for a hill, or I can use engine braking to slow me down.  I can let the motor do a lot of the work for me.  The 450 seems to promote laziness.

A two stroke puts out a higher pitched sound than a four stroke.  They can sound a little ‘whinny’.  But if properly tuned up, it is probably quieter than a 450 four stroke.  When close by, the higher pitch is a little more irritating, in my opinion, but it isn’t overly loud.  I was surprised that while riding the bike it didn’t seem loud at all.

The two stroke definitely has a lot more vibration than a four stroke.  It is immediately felt when you first start to ride – especially in your feet.  But to my surprise, I got used to it within a few minutes.  It didn’t seem to bother me at all.

So, what is the best bike for you?  It depends on what type of rider you are, and what type of rider you want to become.  I found that in many ways the 250 felt a lot like the 300 – you had to shift more often and it has softer engine braking.  It didn’t have nearly the power of the 300, but the riding style was similar.

Here is my summary of criteria that may help you decide which bike is your best selection.

The 300 two stroke is the bike of choice if: 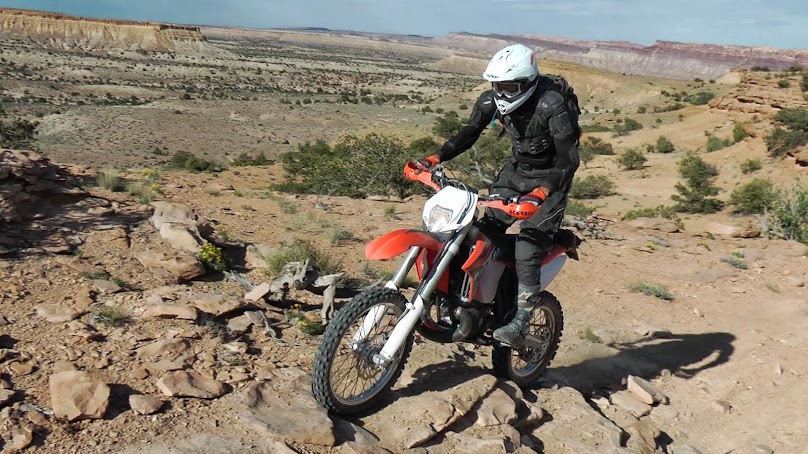 The 450 four stroke is the bike of choice if: 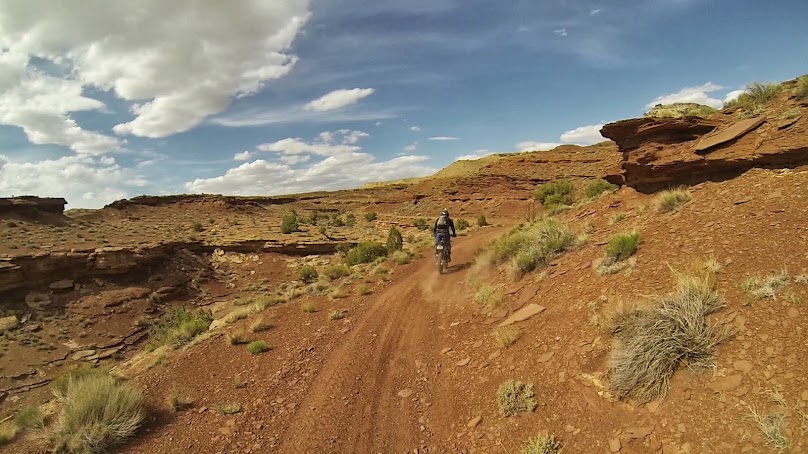 The 450 is great for cruising 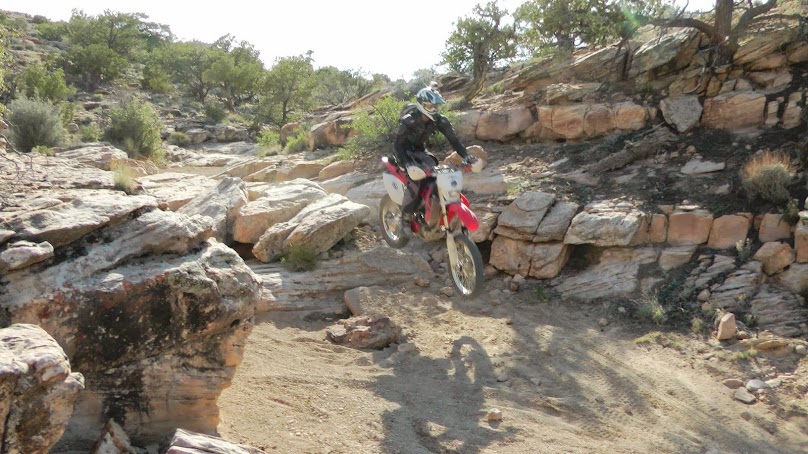 Jumping off ledges on the 250.

During August I got a second chance to ride the KTM 300 out at Knolls.  This helped me resolve a few questions I have been wrestling with.  My son really needs a bigger bike, so I lowered the 250X so my daughter could move up from her crf230.  My son doesn’t want a 450, so it comes down to either a 300 2T or a 350 4T.  In fact, a KTM 350 XCF-W is the bike I wanted to buy, but it didn’t come out soon enough so I bought the Husaberg.

After my second ride on the 300 I concluded the ONLY thing I like about the 300 is the light weight.  For my riding style, the 4T is just a better choice.  If I were more in to technical single track riding, I would go for the 300.  But most of my rides are family oriented scenic type rides.  Plus, we are now getting in to dual-sport riding.

For my riding style, the 350 is the perfect bike.  He has enough power for my needs and it feels much lighter than the 450.  I can ride it comfortably all day long.  I find that I stand much more on the 350 than the 450 even though I tried to set them up exactly the same.

I think the 350 makes the 4T vs 2T decision harder.  They are both super fun bikes.  They have different power bands, sound, and maintenance requirements.  So it really comes down to which of those characteristics matter to you the most.

10 Responses to Two Stroke Vs. Four Stroke – My Initial Impressions