We decided to squeeze in a short vacation with Marcy & Isaac before Isaac started his residency at the U.  We considered going to Moab, but decided it would be too hot.  So, we elected to do some mountain biking around Duck Creek Village in southern Utah. 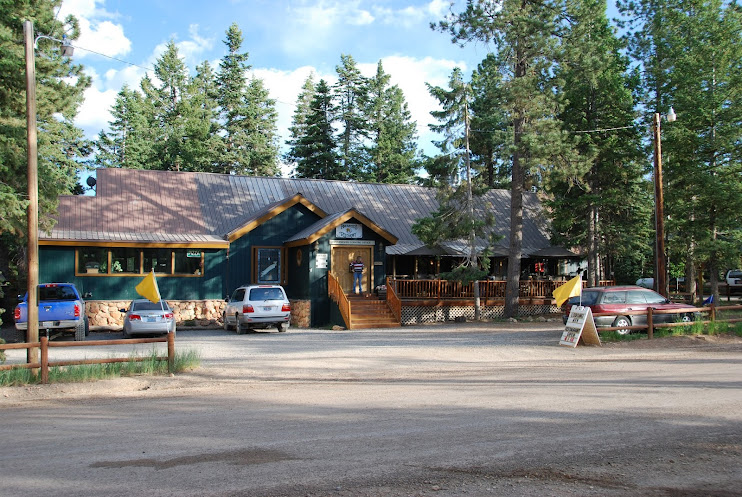 We stayed in The Inn #15, which sleeps up to eight people.  We had seven adults, plus Sophie, so it seemed like a good match.  We quickly learned that the rental units are much smaller than they looked on the Internet.  You can sleep eight people, but there isn’t much room to move around. 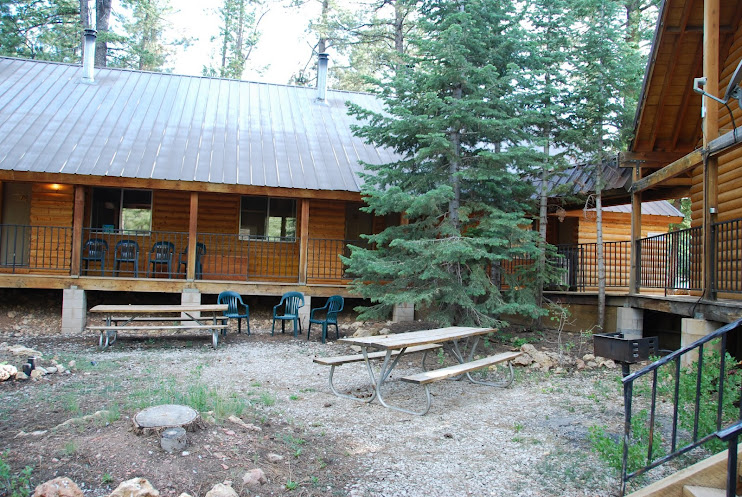 Our lodgings at The Inn

Kevin and Jason shared a king-sized bed in the upstairs loft.  Dee and Kim were in the upstairs bedroom with a queen-sized bed.  Marcy, Isaac, and Sophie were in the master bedroom downstairs.  Jamie got stuck with the hide-a-bed, which was extremely uncomfortable.  She ended up sleeping on the couch cushions on the floor. 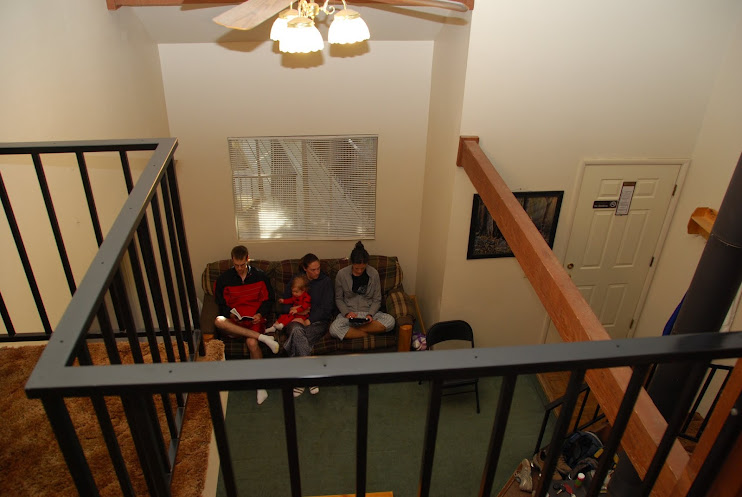 Looking down from the loft

The resort does offer a lot of other attractions in addition to a wide variety of rental units from motel-like rooms to full cabins.  The site includes a horseshoe pit, tetherball (which Sophie really didn’t like), volleyball, a game room, a Jacuzzi, as well as ATV and snowmobile rentals.

A free enhanced continental breakfast is also provided.  It is enhanced because they offer French Toast – pre-made toast you pop in the toaster.  Breakfast was a little disappointing, but we could at least get our fill.

A fairly upscale (expensive) restaurant is available for dinner. 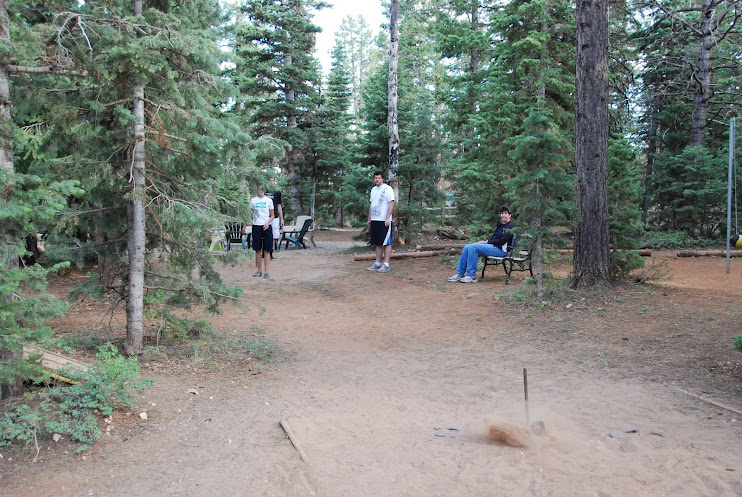 On our drive down we passed through Brian Head and Cedar Breaks.  Isaac had never been to Cedar Breaks before, so it was nice to stop and take a look.  We didn’t stop for long, however, because we wanted to get in our first bike ride prior to checking into our lodgings.

I figured the Navajo Lake loop would be a good starter ride.  It is easier than the other rides, with much less vertical climbing.  It has numerous short climbs, which add up to almost 400’, which we found quite taxing since the elevation is around 9000’.  There really isn’t much air up there!

Kevin and Kim watched Sophie while the rest of us rode the southern half of the 10 mile loop.  They met us at the half-way point and switched with Marcy. 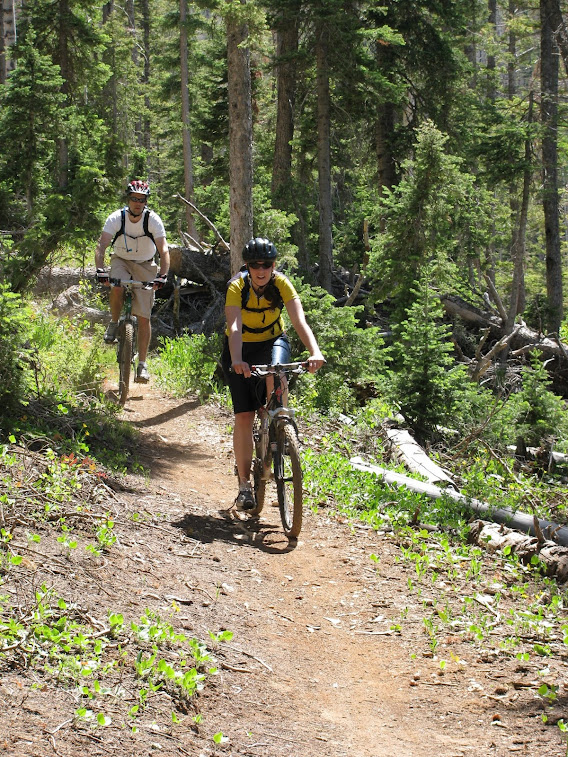 Marcy & Isaac getting the feel of the trail 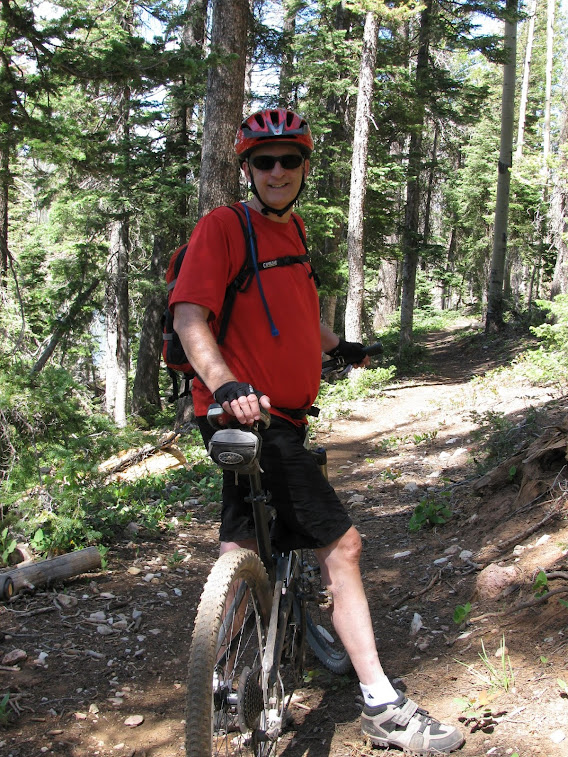 I love this trail!

Others preferred the northern half, which has shorter, but steeper climbs.  It is also more open as it traverses the hillside through the aspen trees.  The trail is also significantly narrower, which Kim doesn’t like.

The main road bisects the trail at the east and west ends, making it very easy to switch off riders.

After crossing the road on the eastern end, you have to cross a lava bed.  Care must be taken here to avoid puncturing a tire on the sharp rocks. 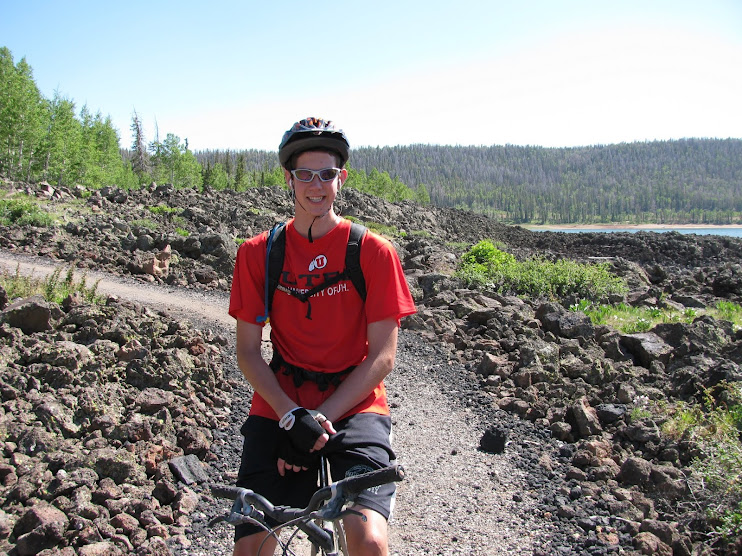 Jason in the lava beds

Kim remembers enjoying this ride from our last trip here many years ago.  She found that it was much more challenging this year.  She started off doing really well and made many short climbs that I expected her to walk, but about half way down the northern end the lack of oxygen took its toll.  She did manage to finish the ride, but was very glad to reach the car. 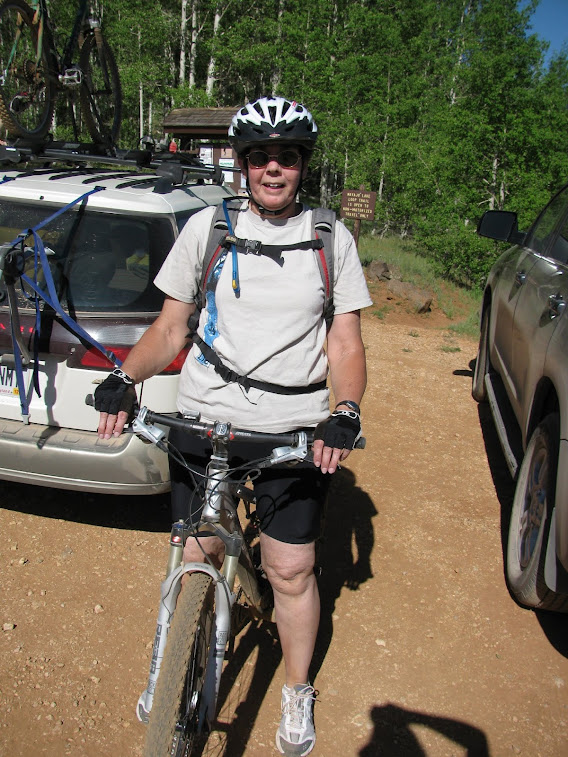 Kim – glad to be done

Marcy and Sophie walked up the trail a ways to greet us as we finished.  We were all tired and dusty and ready to go to the motel and get cleaned up.  It was surprising how hard this ‘flat’ trail really is. 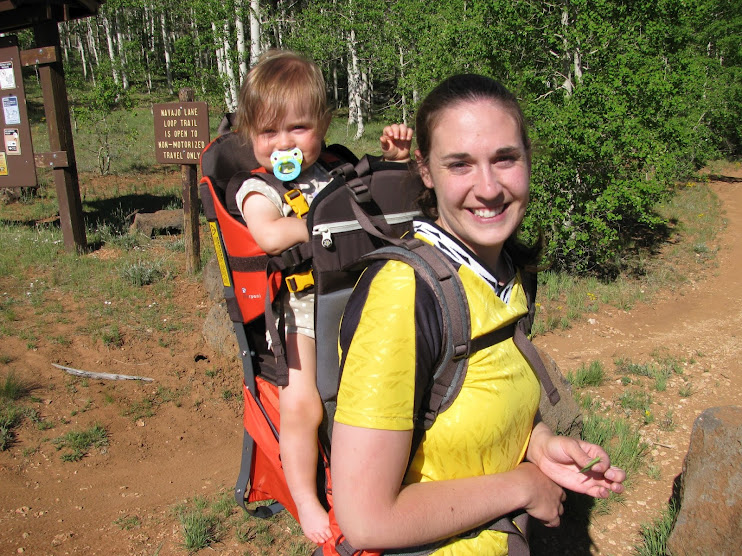 Marcy & Sophie waiting for us to finish

On Friday morning we drove over to Red Canyon along Hwy 12 near Bryce Canyon.  The plan was for Marcy and Kim to ride the Red Canyon paved bike path and tow Sophie behind in the bike trailer.  Kevin decided he wanted to go on that ride as well. 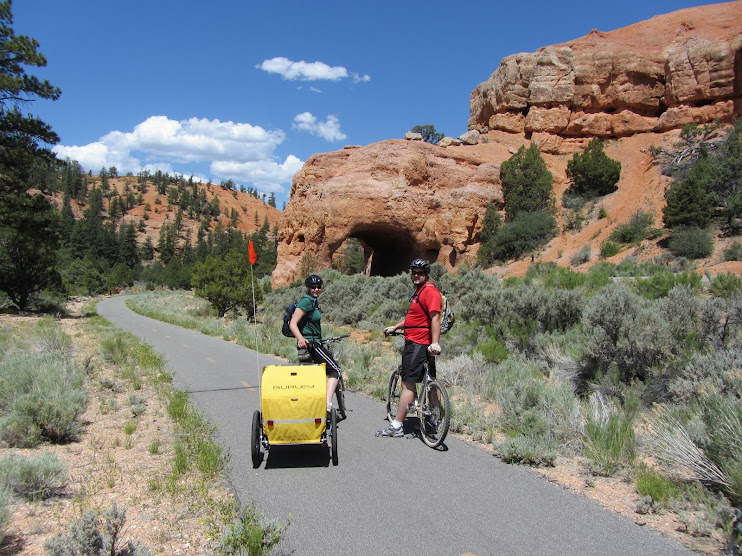 The rest of us were going to ride the Thunder Mountain trail, which parallels the paved bike path.  Both trails end at the same point, so this allowed us to meet for lunch.

The Thunder Mountain ride is just over 7.5 miles long – but it is a hard 7 miles.  I rode this trail several years ago with Gary and our ward young men’s group and really enjoyed it.  This time, I found it significantly harder.  It was more physically demanding than I remembered, and it was more technical.  This is partially due to the fact that I am getting older, and partially due to the fact that frequent horse tours on the trail have really chewed up the trail.  Much of the trail consisted of 4” of loose, dry dirt, with scattered jagged rocks hiding underneath.  I was exhausted by the time we finished. 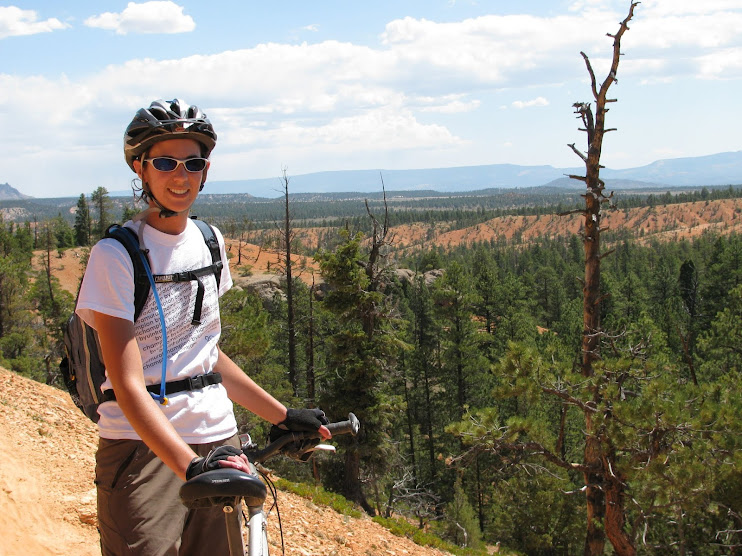 Jamie enjoying the trail and the scenery

The trail does offer some spectacular views, and it is a very unique trail since most of it is on loose red rock fragments with red hoodoos all around. 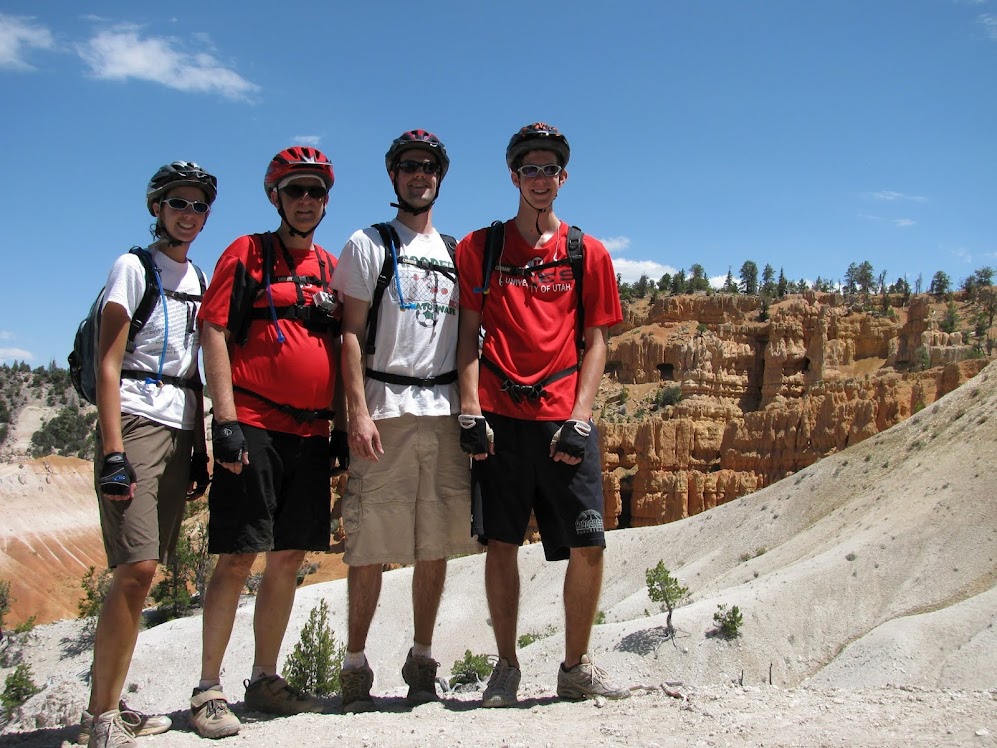 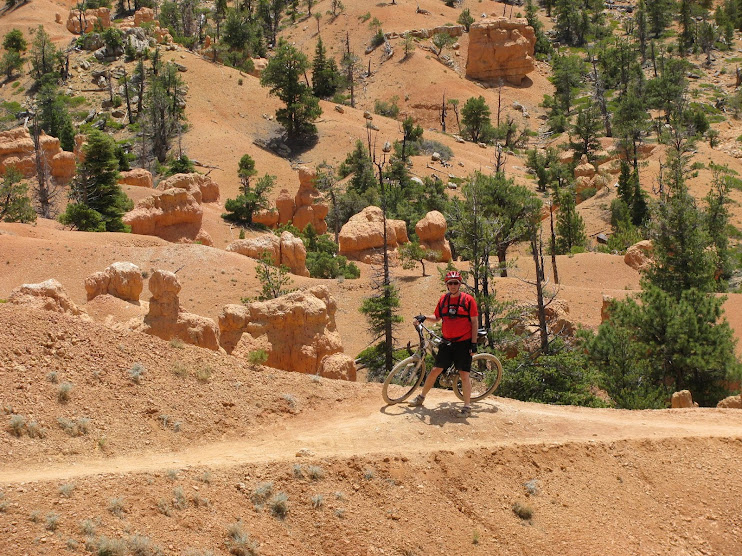 My favorite part of the trail is the last mile.  Once the trail exits the red rock canyon, it enters a wooded area.  It starts with a few hundred yards of vertical climbing, followed by about a ¾ mile long downhill cruise through the trees.  What a great way to end the ride!

The ride took much longer than we expected, so we were ready for lunch when we finally reached the end of the trail.

We decided that the VRRT had too much vertical and we would be too exhausted to enjoy the hike.  So, we decided to do the hike first and then go ride the Right Fork of Bunker Creek.  Both were wise decisions. 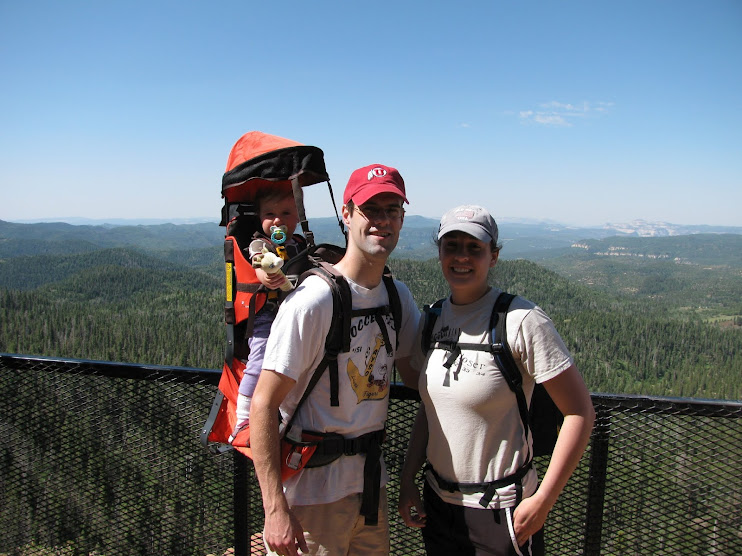 Sophie, Isaac, and Marcy, with Zion National Park in the background

The trail to Cascade Falls is less than one mile long.  It is a well maintained trail with incredible views overlooking Zion Nation Park and the Pink Cliffs. 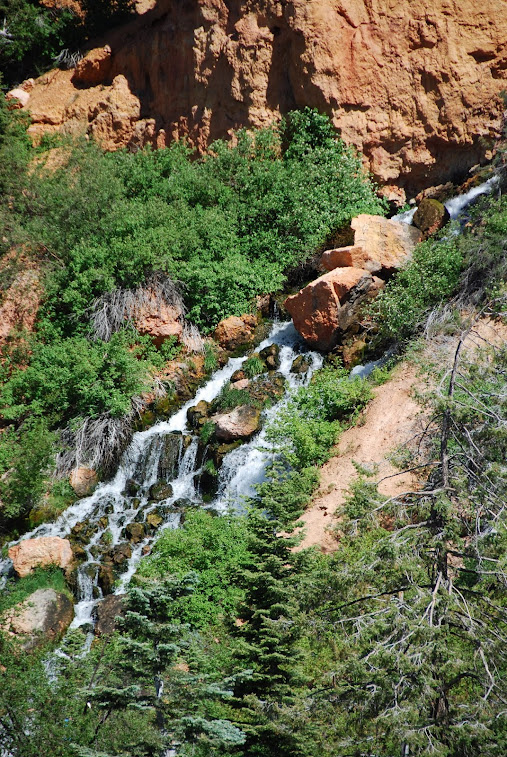 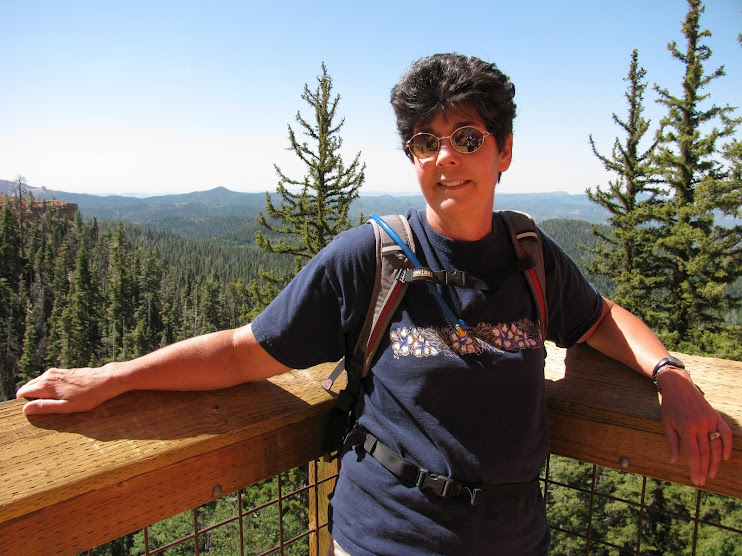 Kim at the falls

After completing the hike we drove back up to Cedar Breaks and ate lunch as a cold front moved into the area.  The temperature was much colder than we expected, so we ate as quickly as we could.

We then drove to the top of Brian Head Peak, at 11,300’ in elevation.  We enjoyed the views above Brian Head and Cedar Breaks, and watched the storm clouds build.

In spite of the weather, we decided to press on with our ride.  The trail follows a ridge line in a northeasterly direction.  This top portion of the trail is mostly out in the open, with occasional jaunts through clumps of pine trees.  The trees are fairly sparse because we are close to timber line in elevation.

Every once in a while the trail would open up to a great scenic overlook of the terrain to the north. 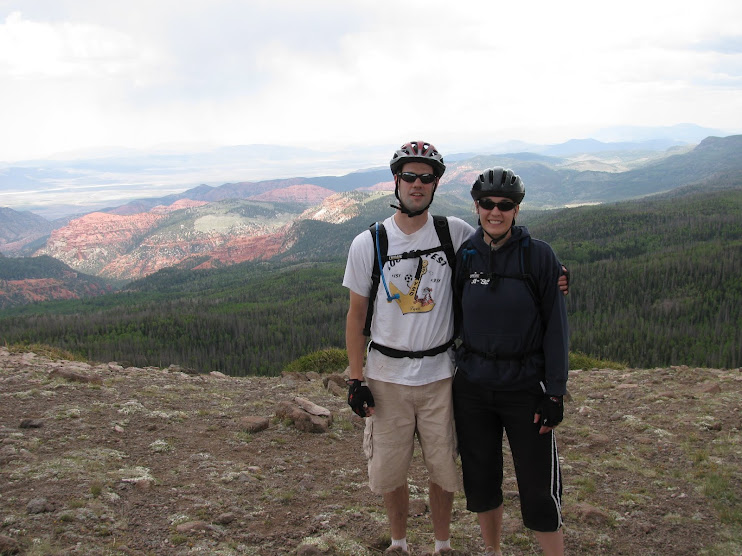 Isaac and Marcy at one of the scenic overlooks 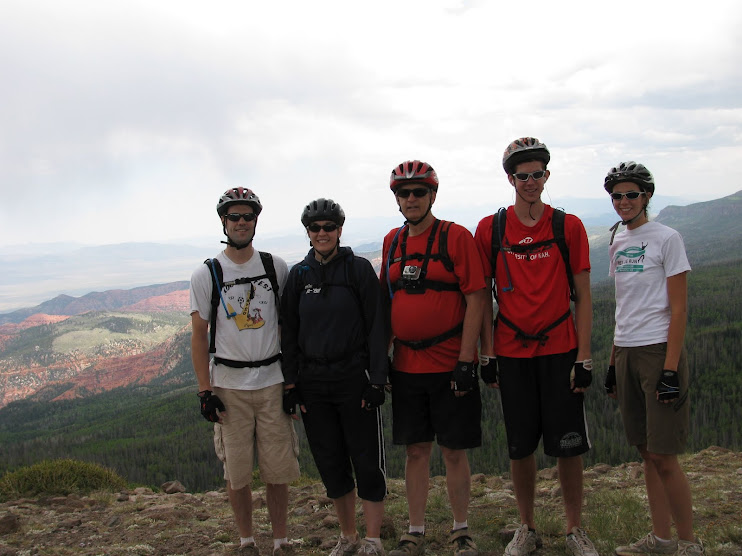 We stopped at the final overlook for a snack break and to take some pictures. 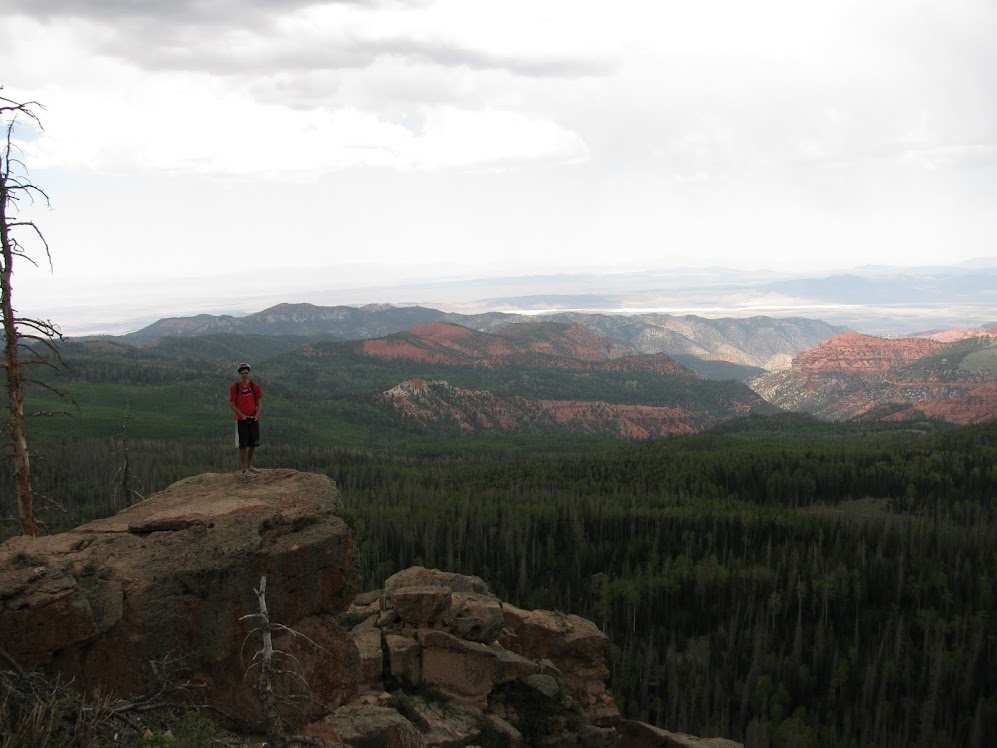 The storm was moving in, and we heard some thunder.  It was time to get off of the ridge.  Luckily we were near the junction of the left and right forks of Bunker Creek as it started to rain.  And luckier still, the rain didn’t last long.  Otherwise, we would have been soaked and had a very slippery downhill ride ahead of us. 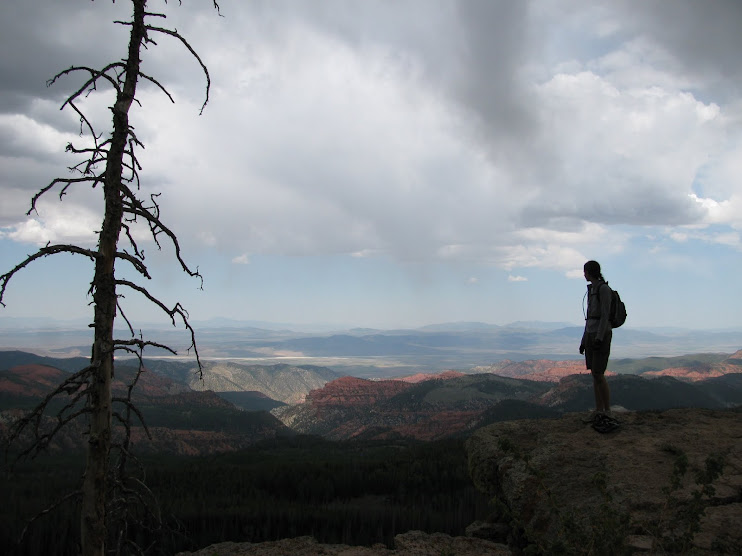 Jamie – with a storm moving in

As we dropped in elevation the temperature started to climb.  It was about 55º at the top, and climbed to over 80º at the bottom.

The drop down Bunker Creek is steep in sections and rocky in sections, so I chose to walk some sections.  We took the right fork because it is less technical than the left fork.

Once the two trails merge back together, the remainder of the trail is an old Jeep road.  This section is a fast cruise with some bumps where you can get air if you dare.  Jason dared a little too much and did a face plant.  Luckily he wasn’t seriously hurt – just his pride and few scrapes. 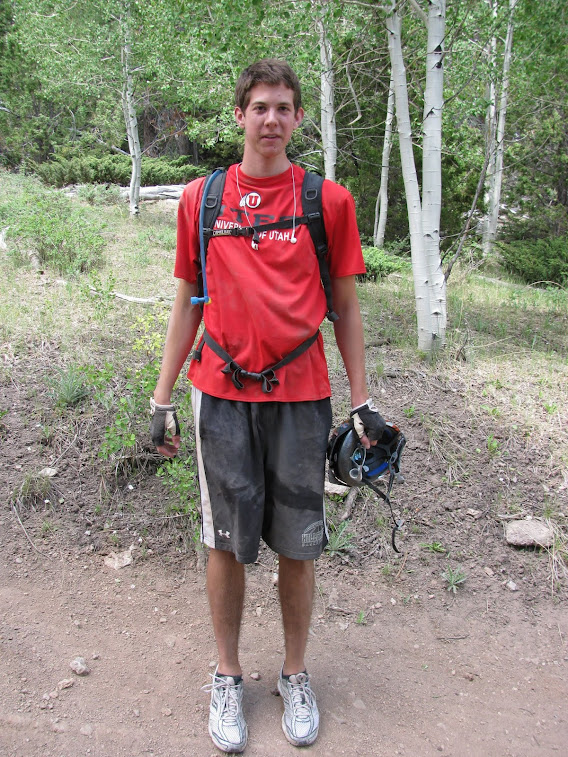 The trail is 11 miles long with almost 3000’ feet of descent.  Now that is my kind of trail!  I think everyone agreed that this was the most enjoyable ride of the trip.

Once we reached the highway, we rode one more mile to Panguitch Lake where Kim, Kevin, and Sophie were waiting for us.  We enjoyed a milk shake and then headed back to the motel.

On Sunday morning we ate a quick breakfast and checked out of our motel and drove to Panguitch to attend church.  The bishop tried to recruit Jason for the high school basketball team.  He said if we would move to Panguitch he would guarantee him a spot on the team.  A tempting offer…  I have always liked Panguitch – I find the people there to be very friendly and down to earth.  (And later we learned that they have a nice hospital).

After church we took Hwy 89 towards home.  We ate lunch at the Hoover’s rest stop, and then drove to Big Rock Candy Mountain. 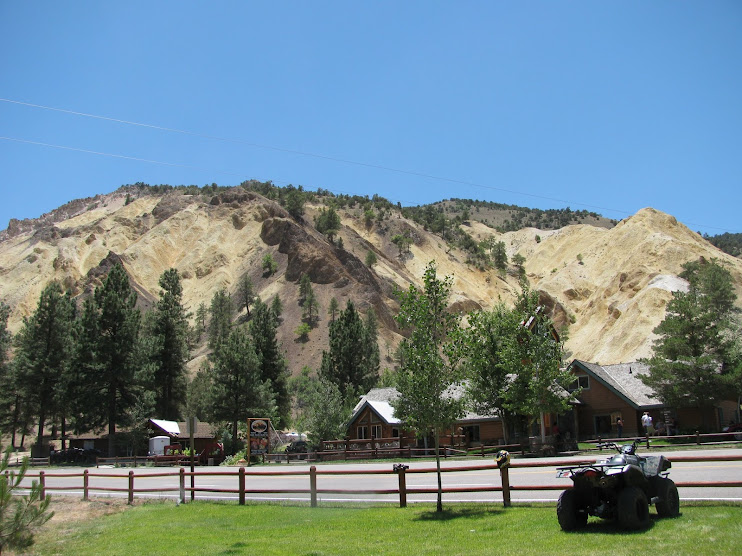 There is a fairly new paved bike path along the Sevier River from Big Rock Candy Mountain to the town of Sevier.  The trail is called the “Candy Mountain Express”.  We elected to ride the trail one-way since we had a strong wind and it was 97º.  It would have been a much more enjoyable ride if we weren’t in a hurry to get out of the wind and heat.  Nevertheless, it was worth doing.

We then loaded up the bikes and headed home.  All in all, it was a really great trip.