To celebrate Jamie’s recent graduation from BYU, we decided to spend a few days mountain biking near Fruita, Colorado.  For the past several years, Fruita has been growing in popularity as the place for mountain biking.  Moab has been a mountain biker’s paradise for many years, but you really need to be fit to enjoy the brutal trails Moab has to offer.  Fruita has more free-flowing trails that require less physical stamina and technical skill.  It also offers advanced trails for the diehard bikers – but there are numerous enjoyable trails for less aggressive riders like me.

It takes just over 4 hours to drive from Salt Lake to Fruita – just slightly longer than the drive to Moab.  Fruita is located just across the border in Colorado along I-70 – just before you reach Grand Junction.

We drove down Thursday evening and stayed in the Comfort Inn motel.  It wasn’t until the day before that we learned this was the weekend of the Fruita Fat Tire Festival – so the place would be crowded.

The desert just north of Fruita contains recreational opportunities for motorized use (ATVs and dirt bikes) as well as non-motorized (mountain biking and hiking).  The primary mountain biking area is known as “18 Road”.  It is helpful to have a map and/or directions to the trailhead since 18 Road is not continuous.  You have to negotiate several small country roads in order to get there.  The trailhead has ample parking and restrooms.

The bike trails primarily reside in the foothills between the Bookcliffs and the desert.

From the main parking area, the recommended route up to the foothills is a trail called “Prime Cut”.  This is recommended as a one-way trail – going up.  Many of the other trails are one-way for coming back down.  This is to avoid nasty head-on collisions.

We arrived at the trailhead about 10:00 AM.  The weather was cool with a cold wind blowing.  The crowds were starting to arrive, so we started on our first ride.

From the trailhead (18-TH) we started up Prime Cut (the center track on the map).  We knew it would be a steady climb, but we were unprepared for the level of difficulty.  Even Jamie, who has been riding her bike at BYU, found it challenging.  We had to stop frequently to catch our breath.  The trail is just over 2 miles long and climbs about 480’ in elevation.  The trail isn’t overly technical, although there were a few gulley crossings that we walked.  In spite of the steady climb, it was an enjoyable trail as it wound its way through the juniper trees. 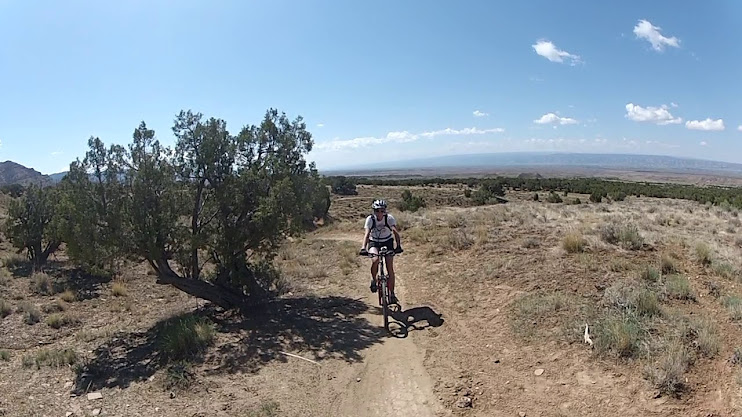 We then worked our way to the west until we intersected the main gravel road.  We stopped for a granola bar.  After our rest, we started down a trail known as Kessel’s Run.  What a blast!  The trail basically follows a gulley with banked turns as you crisscross the gulley all the way to the bottom.  Going down was much faster – and more fun – than going up. 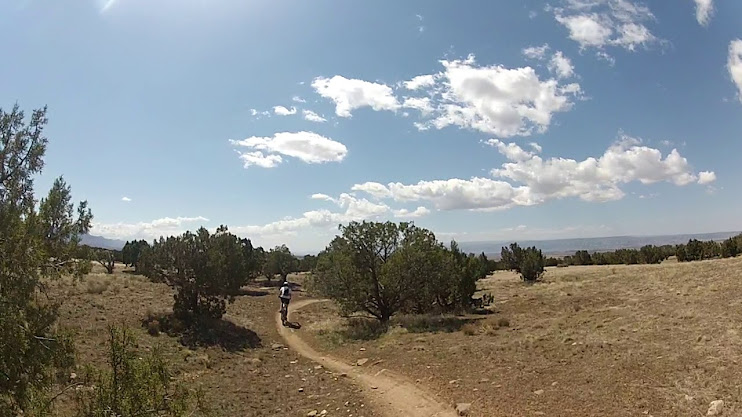 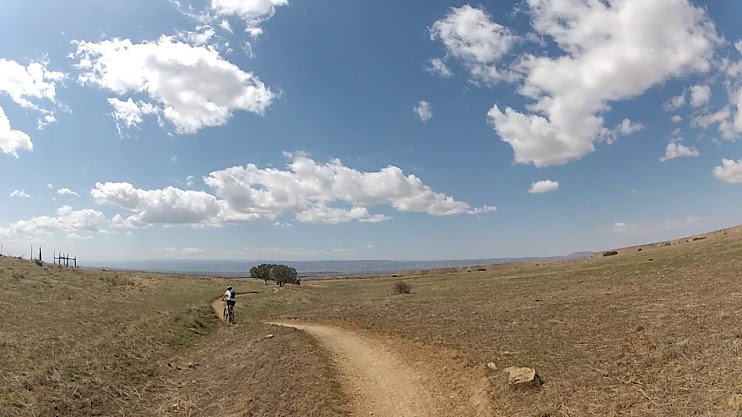 The lower portion of Kessel’s Run

We returned to the car and took our lunch break.  We discussed our options for the afternoon ride.  We even considered taking turns shuttling to the top in the car and riding Kessel’s Run again.  But we decided we were here to ride, so “let’s explore some other trails.”

Jamie and I were both surprised at how much better we did going up Prime Cut the second time.  I think we only stopped to rest twice.  I don’t know if this is because the air was now warmer (although the wind was blowing even harder), or we were warmed up from our earlier ride.  But it didn’t seem nearly as difficult the second time around.

My original plan was to ride Joe’s Ridge on our second loop, but while going back up Prime Cut, we noticed people coming down a trail just east of Prime Cut.  I knew they were opening up a few new trails this year, but I didn’t have any details.  We figured this was one of the new trails and it looked really fun – so we decided to give it a try.

At the top of Prime Cut you can go left for Kessel’s or Joe’s Ridge, or continue straight for the famous Chutes and Ladder trail.  This new trail, called “Pumptrack” starts from this same intersection, but you turn right.  We didn’t know the name of the trail until I did a google search after returning home.  This is a PBR trail – pumps, berms, and rollers.  For those that love speed – and air – this would be a real gem.  Luckily for Jamie and me, the numerous jumps had smooth backsides so we could just roll over them.  This trail was really fun.  It is a good trail for mellow riders like us as well as those that like to get air and really haul down the trail.  Luckily for us, the trail was not yet well known, so we didn’t have any speed demons running us over. 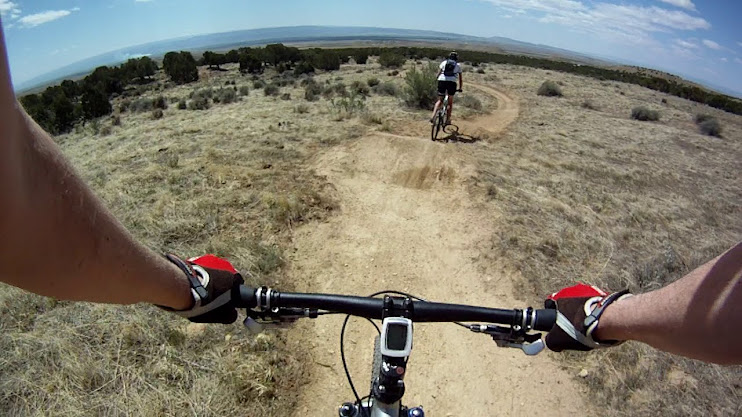 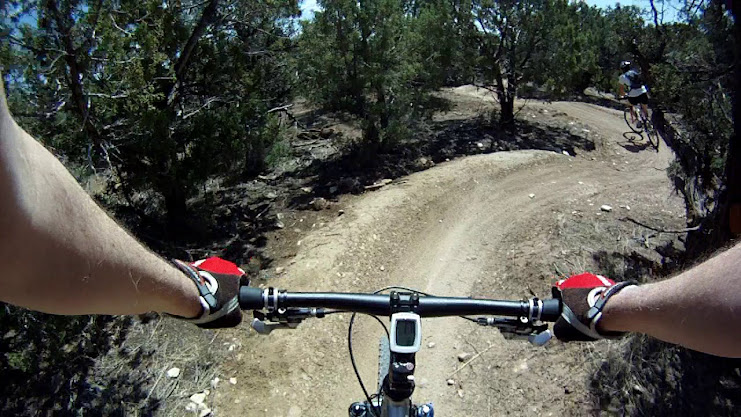 Kessel’s Run and Pumptrack were both really fun.  This is my kind of mountain biking!

After our second loop we returned the motel, showered, and then took a scenic drive through Colorado National Monument.  The road through the monument is about 20 miles long, and with the stops we took at about half of the overlooks, it took about 2 hours to complete.  The scenery was spectacular, but the cold, bitter wind didn’t encourage long visits at the overlooks. 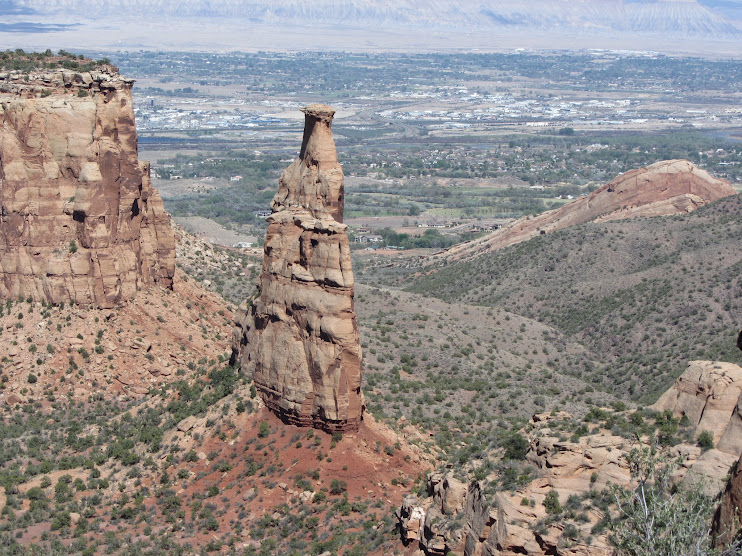 A view of Grand Valley from Colorado National Monument 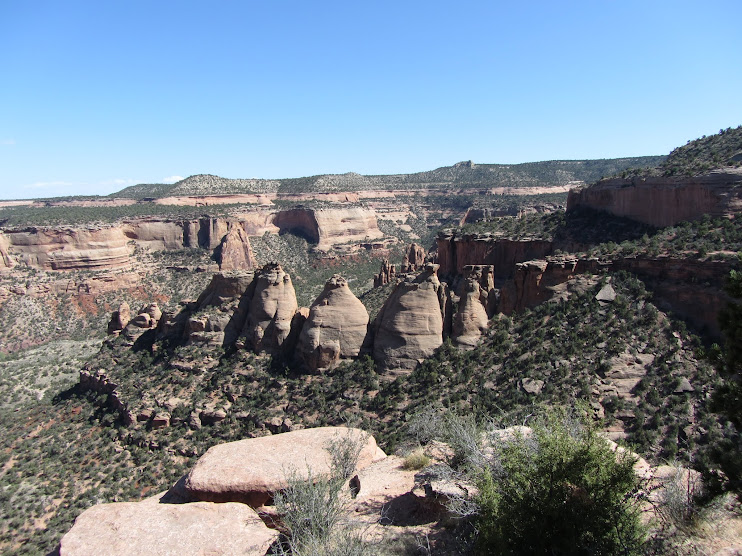 One of many scenic overlooks in Colorado National Monument

The Kokopelli bike area is perhaps the most popular of the 5 major biking areas around Fruita and Grand Junction.  With the Fat Tire Festival in full swing, we knew we would encounter crowds on these trails – but we had no idea just how crowded an area could get.  Luckily, we got an early start.  The wind had died down and the temperature was perfect for biking – in the 50s and 60s.

We parked at the main staging area near the rest rooms.  The ride started by climbing a hill on a gravel road.  When we arrived at the top, we saw a much steeper and longer descent on the other side – and more places to park that were closer to the main trails.  That meant we would have to ride back up this steep hill at the end of our day.  Oh well – press on.

We buzzed down the road to the entrance to Rustler’s Loop.  This is a practice loop and it was very enjoyable.  It even has interpretive signs along the way giving advice on trail etiquette, choosing the right gear, handling long climbs and long descents, etc.  This is a great trail for developing your riding skills.

The trail has a few semi-rocky sections and a few climbs, but nothing overly technical.  It was a very enjoyable trail on the bluff above the Colorado River. 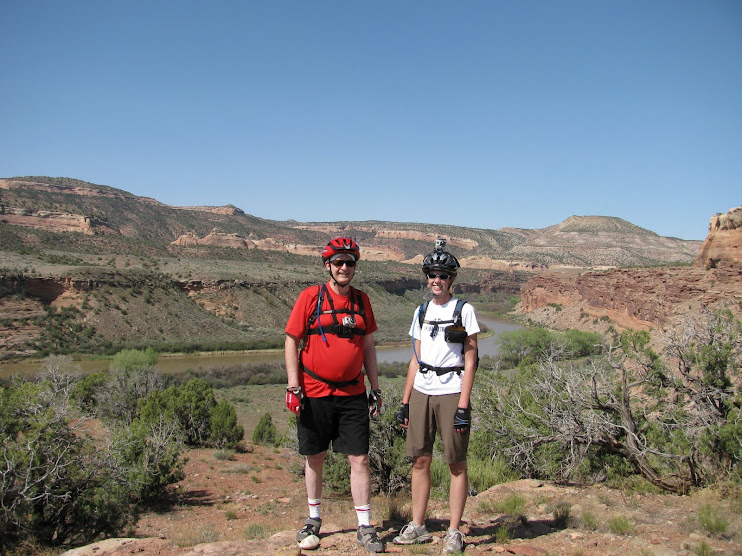 Dee and Jamie along Rustler’s loop

After completing Rustler’s Loop, we joined the never ending crowd climbing Mary’s Trail to the entrance to the popular Horsethief Bench trail.  This portion of Mary’s trail was pretty rocky and a steady climb.  I walked my bike much of the way.  Even while riding, I was constantly being passed by faster riders.  I could not believe how many people were there! 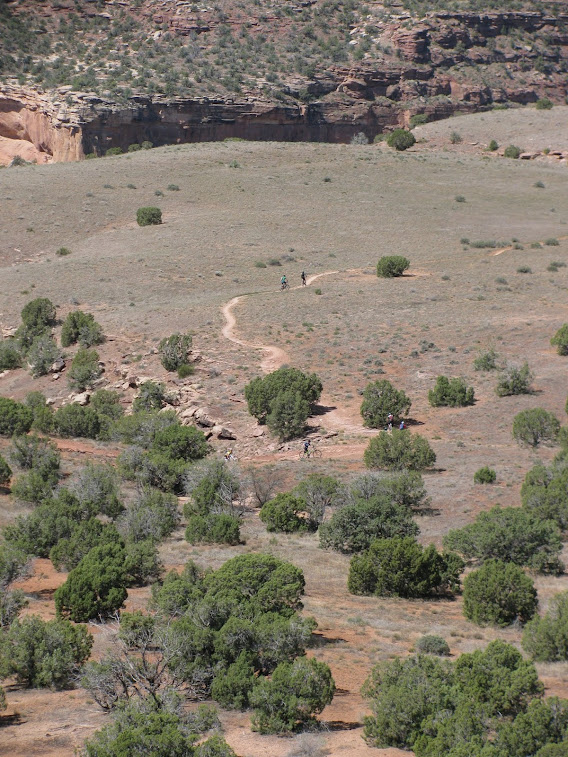 After the long climb up Mary’s Trail, you have to descend a steep rocky ramp to gain access to Horsethief Bench.  Some people actually try to ride this section.  I found it challenging to walk down.  It seems much, much steeper in person. 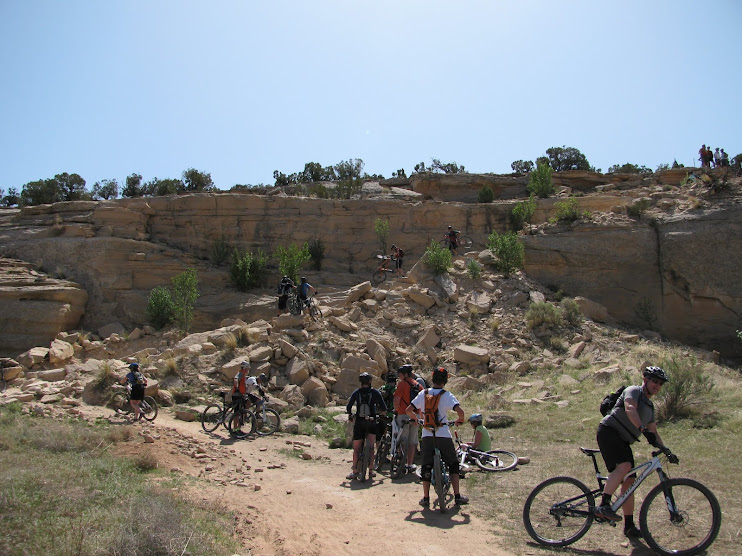 The rocky entrance to Horsethief Bench

We finally figured out that we happened to start Mary’s Trail in the middle of two or three tour groups – hence the huge crowd.  So while they were still collecting at the bottom of the stairway, Jamie and I pressed on until we found a nice place to stop for our ‘first lunch’.  We picked a section of the trail with a steep slickrock descent which I knew, from reviewing YouTube videos, was a likely spot for some entertaining crashes.  A meal and entertainment – we couldn’t pass that up.

The following photo shows the spot.  We were rewarded by one spectacular crash.  One fellow hit the dirt at the bottom on an angle, which twisted his handlebars out of his hands and he went flying over the bars and did a face plant.  Unfortunately, Jamie snapped a photo a little too early.  Fortunately, he was not hurt – although his handlebars needed realignment. 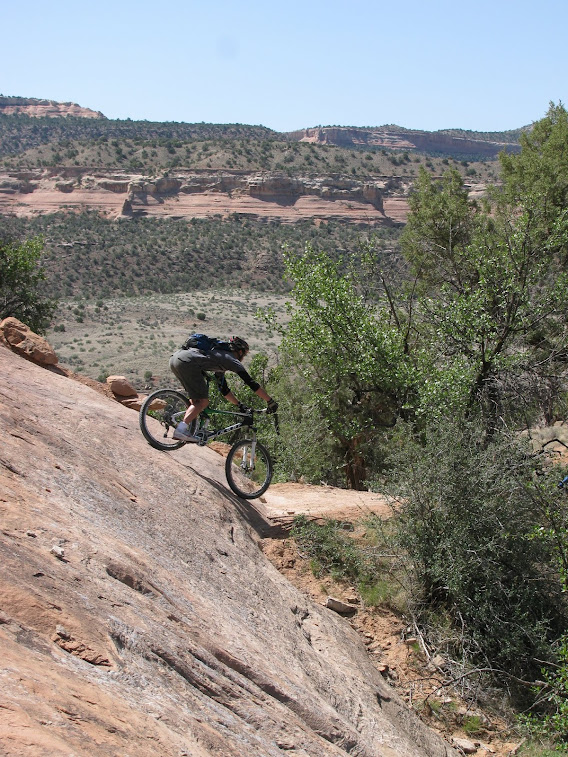 One of many obstacles along the trail

Horsethief Bench is on a bluff above the river similar to Rustler’s Loop, but significantly more challenging.  There are numerous rocky sections, soft sand, and ledges of all sizes.  I personally found the trail a little too technical.  There were some enjoyable sections, but most of it was pretty technical.  I ended up walking a fair amount of the trail. 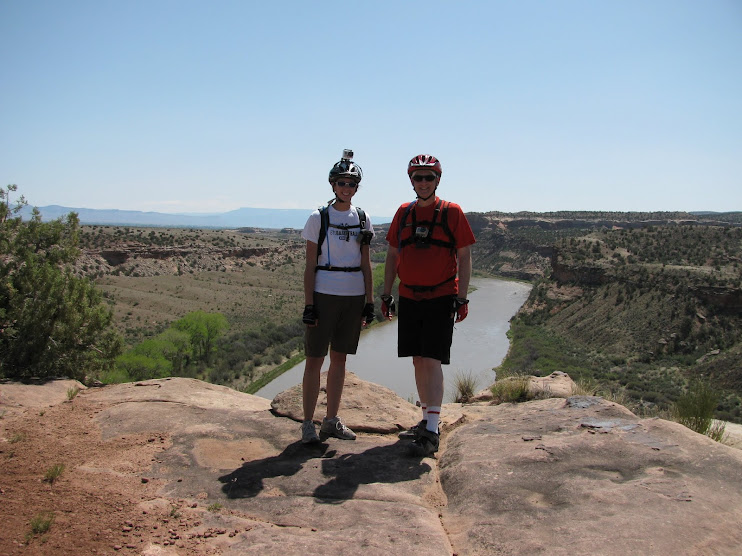 Jamie and Dee at an overlook on Horsethief Bench 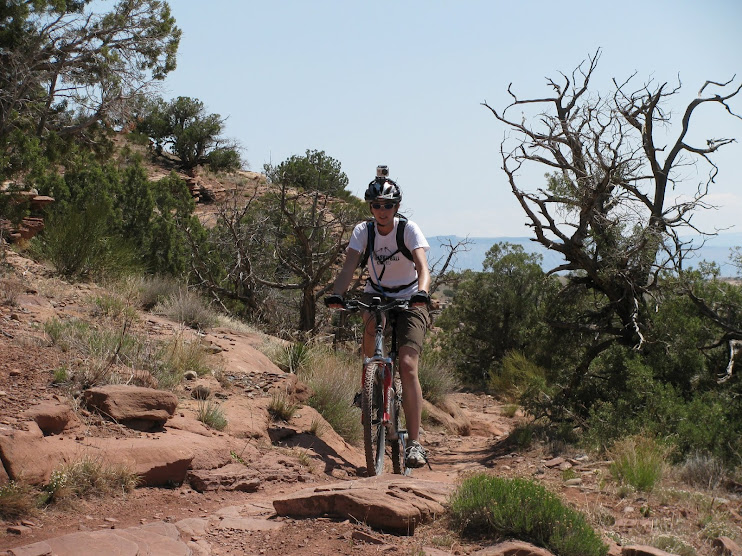 Jamie on the trail

We enjoyed our ‘second lunch’ at a nice spot just above the Colorado River.  We even got to watch a few boats float by. 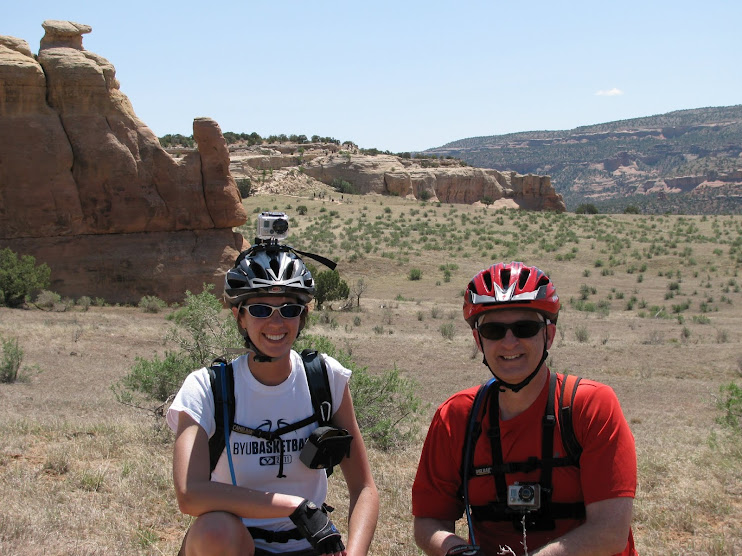 As we neared the end of the loop we could see a large crowd still gathered at the trail entrance/exit.  This can be seen in the distance in the photo above, and a close-up below. 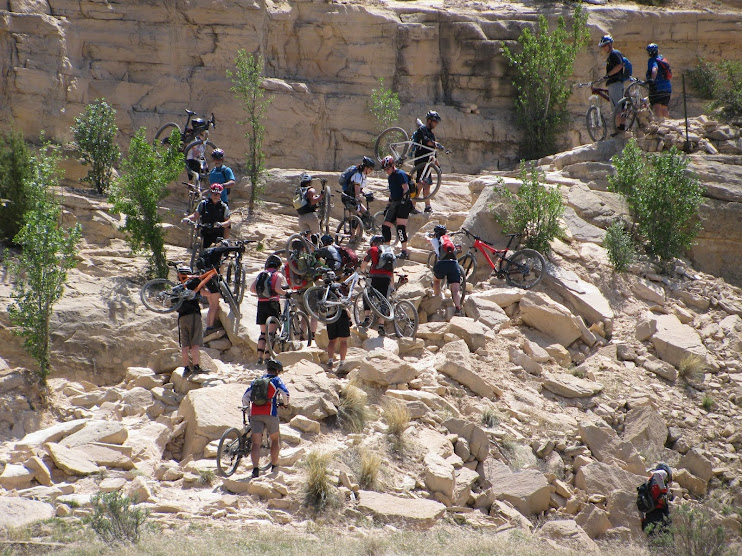 Hike-a-bike up and down

After making the climb back to Mary’s Trail, we continued up Mary’s Trail for about another 0.3 miles and then took a new trail called Wrangler back to the car.  Wrangler wasn’t particularly hard (except for one long climb), but it was really rocky and not all that fun.  But it was probably a better way back to the car than taking Mary’s Trail – especially with the crowds.

Our total ride came in at about 12 miles, with about 1560’ of elevation gain.  Avid mountain bikers wouldn’t think much of that, but for me, it was a real workout.

It was a fun trip and great exercise.  My favorite trails include Kessel’s Run and Rustler’s Loop.  Both are rated as ‘beginner’, which is probably why I liked them.