Due to the excessive high water this year, we canceled our Lodore Canyon river trip plans.  In its place, we decided to run some southern Utah desert rivers that seldom have enough water to run.  Our plan was to run the San Rafael River, Muddy Creek, and the Sevier River.

Here is our video:

The weather on the river was hot – in the upper 90s during the day.  We camped at higher elevation near I-70, about half way between the San Rafael River and Muddy Creek.  This gave us temperatures about 10º cooler.  Evening temperatures were pleasant and nighttime temperatures were perfect for sleeping.  There were some gnats and biting flies, but they were not as bad as I feared.

Our adventure started off great with a gourmet breakfast prepared by Joe and his sons.  A sure way to get invited on future adventures! 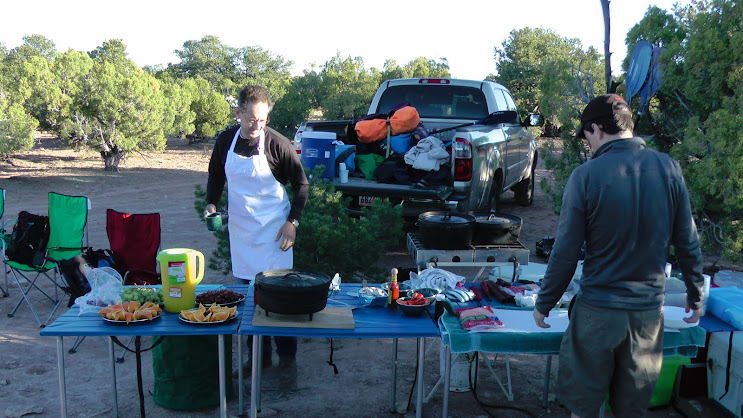 Our camp was about 20 miles from the take-out at Swinging Bridge.  The road is in good repair, so we made good time getting there.  We walked across the old swinging bridge and scouted the take-out.  The river was running at just under 1700 cfs (500 is considered high water), so we wanted to make sure we could easily land all of our craft and not get swept down river into the dangerous Black Box canyons. 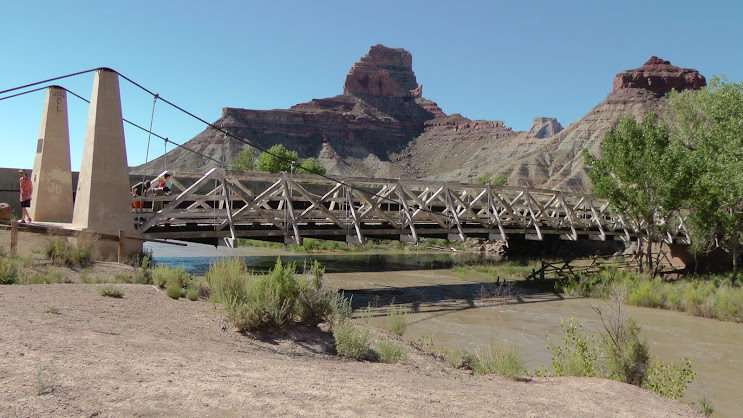 We left Barry’s car at the take-out, piled everyone in my Yukon and Joe’s Tacoma, and headed up Buckhorn Wash.

The San Rafael river from Fuller Bottom to Swinging Bridge

We took a detour out to the Wedge Overlook to get a gorgeous view of the Little Grand Canyon of the San Rafael River. 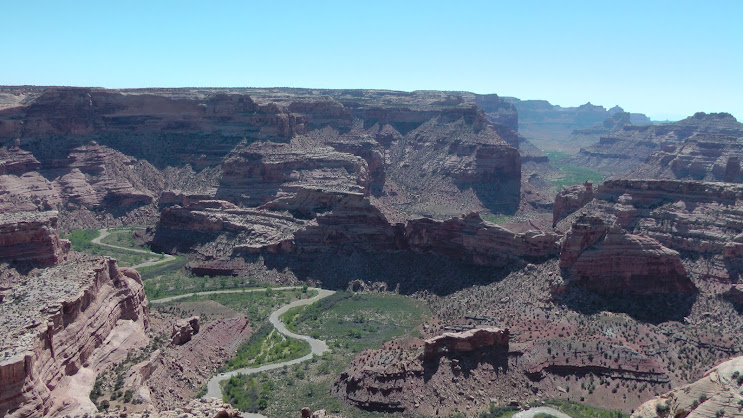 View from the Wedge Overlook

The road to Fuller Bottom (the put-in) has some deep sandy sections and is a little rough in spots.  On the way down my car died.  It has been experiencing intermittent problems for over a year, and today it decided to act up big-time.  Luckily, the engine usually starts again after letting it sit for a few minutes.

After a few stalls, we finally made it to the put-in.  I started driving down to the river and noticed that the river was flooding outside the banks.  I decided it probably wasn’t a good idea to go down there with a trailer.  As I tried to back up, the car died again.  It wouldn’t start, so we decided to unload the trailer and pump up the boats right there.  Luckily, the car started after we finished unloading the trailer. 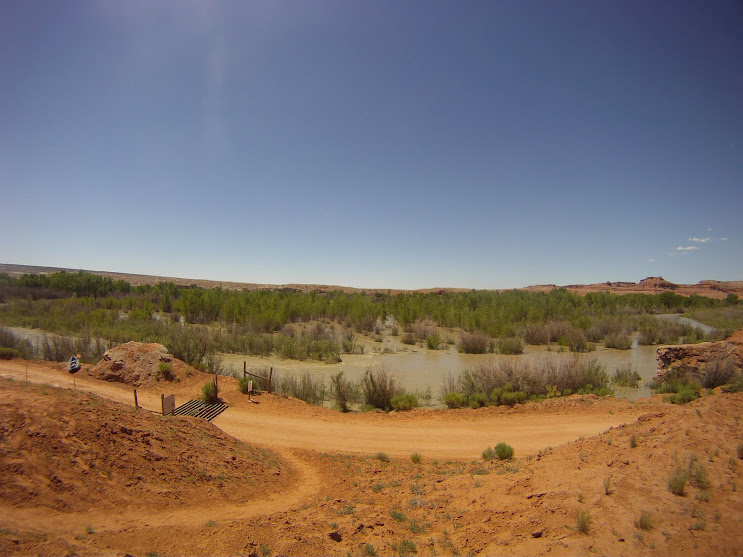 We took our time getting to the put-in because my San Rafael book indicated that a typical float took 5-6 hours at normal flows.  With the high water we figured we could make it through very quickly.  We launched at about 12:30 PM and finished at about 6:30 PM.  The 6 hour trip included a lunch stop and a short hike up Virgin Spring Canyon.

The first part of the river consisted of numerous water channels through the willows and tamarisk trees.  The challenge was to find and stay in the main channel and not get tangled in the brush.

The current was swift but there were no real rapids.  It was a perfect river to practice paddling technique and get a feel for the inflatable kayaks. 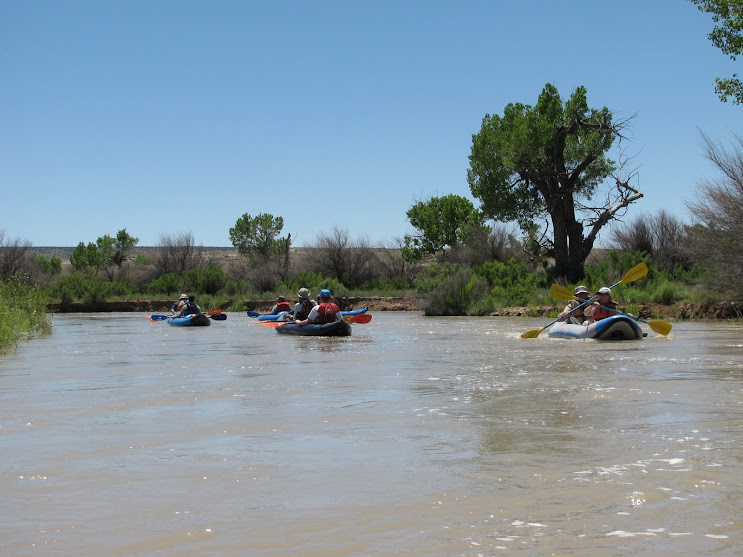 The put-in had a sign warning of a downed Cottonwood Tree that was blocking the river about 5 miles downstream.  Someone had posted a photo on the Internet and showed that it was easy to skirt around the tree with the high water.  As the water drops, this tree could pose a serious safety hazard. 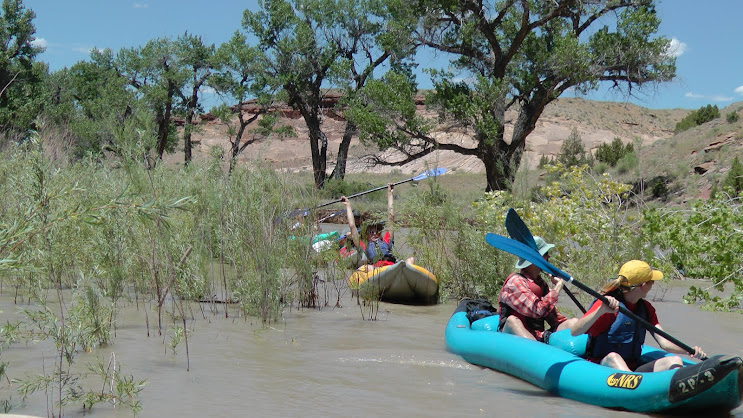 Skirting around a downed Cottonwood tree

The float was about 19 miles long.  It required fairly constant maneuvering in order to avoid overhanging brush and rocks on the outside of bends.  It wasn’t difficult, but it was tiring by the end of the day.

After arriving at the take-out Barry shuttled Joe and me back to fetch our cars.  Joe agreed to follow me back in case my car had problems again – which it did.  It died about 4 times climbing up out of Fuller Bottom.  We decided to move the trailer to Joe’s truck to reduce the load.  The car died again going down Buckhorn Wash.  To my surprise, I had cell phone coverage, so I called my hobbyist mechanic friend Dave Buckmiller.  He gave me some good suggestions.  The car finally started again and we arrived at the take-out, loaded up and headed back to camp.

On the way back to camp the car died multiple times.  The problem seemed to be getting worse.  I suggested that Joe and Barry head back to camp and prepare dinner – I would get there eventually.  We finally pulled in to camp at about 10:00 PM and the car died right in front of my tent.  But I was ready for dinner and a good night’s sleep.