Posted on April 1, 2012 by gardinerfamilyadventures

Our original plan was to do a combination motorcycle and river trip.  The Gardiner’s and the Bradley’s both have 2-man inflatable kayaks, so our hope was to float Muddy Creek in the San Rafael one day and ride dirt trails the other days.  Due to the weather, the river trip was abandoned at the last minute.  We also changed our ride plans.  Rather than ride in the lower foothills of the mountains around Joe’s Valley Reservoir, we opted for some desert riding in the San Rafael.  This was a wise choice, as the mountain trails would have been extremely cold and slippery.

It rained on and off as we drove south towards Price.  When we arrived in Price, it began raining harder and the temperature was in the mid-40s – well below my families “fun threshold”.  We decided to give it a try anyway.

We continued south on Hwy 10 towards Castle Dale, and then turned east for about 16 miles in to the heart of the northern portion of the San Rafael.  The kids kept a close eye on the car thermometer and cheered every time it climbed a degree.  It reached about 51 degrees when we arrived at the trailhead (marked 405JNCT on the topo map).

Our goal for today’s ride was to visit the Wedge Overlook and enjoy the views over the Little Grand Canyon of the San Rafael River.  But we didn’t want to ride the main road – as that would be too boring on a dirt bike.  We wanted to explore some of the lesser traveled Jeep roads in the area (marked in green).

Note: On this map, the trail colors indicate different days rather than trail difficulty.  Most of the trails are easy, with some intermediate.

GPS tracks from our 3 rides

After unloading the trailers, we headed east, along the main road to 406JNCT, and then turned south on the road to the overlook.  We then took the Swazy Hole Jeep trail, which turned out to be a delightful ride – not too hard, not too easy – just a fun cruise through the desert.  We didn’t have time to explore the roads to the east towards Pond #3, so we rejoined the main road to the overlook.

We took a quick break at the overlook (WEDGE-TEE) and watched a storm building to the south west.  We then started along the Jeep road to the west (WEDGE-W) and got about half way when the hail storm hit.  We were better prepared for inclement weather this time than we were last time we got caught in a hail storm in the San Rafael, but those stones still hurt when they sneak through your helmet and whack you in the cheek.  The lightning was not very welcomed either – especially since we were on an exposed cliff face with no good place for shelter. 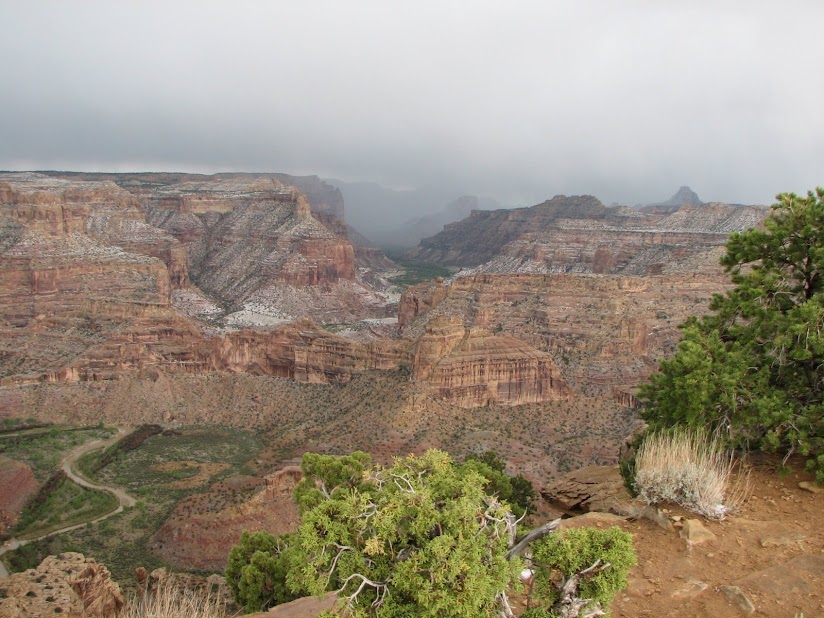 View from the Wedge Overlook

Kim, Liz, and Lauren got smart and headed back to the TEE and found shelter under the outhouse overhang.  The rest of us sought shelter under a small Juniper tree until the storm passed.  We then returned to the TEE and enjoyed the pretty white hail stones covering the ground. 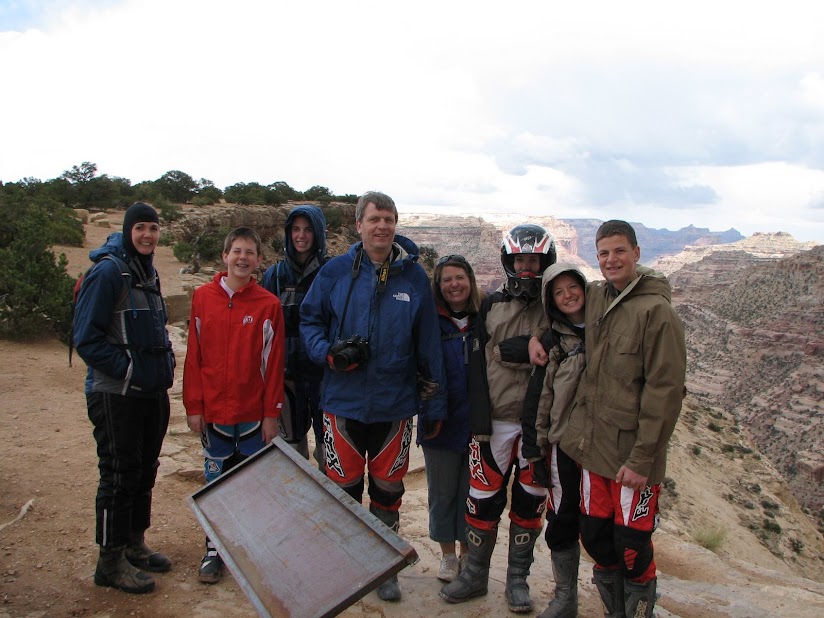 Isn’t supposed to be warm here?

Even though most were a little cold (especially our hands) we opted to finish the ride since our Jeep roads wouldn’t take too much longer than the main road, and we would be riding slower, which would reduce the wind-chill factor.  So we headed to the east overlook (WEDGE-E) and the overlook of the Little Grand Canyon.  With the storm passing to the east, it made for some nice photos.

The Jeep road from WEDGE-E to WEDGE-JNCT, and from there towards Pond #2 and then north turned out to be a very nice ride as well.  Again, nothing too hard, but nice fun riding.  At one point I spooked up an antelope and chased it as it ran down the road for about 200 yards.  We were doing about 20 mph.  I suspect it was just toying with me as I think they can run much faster than that.  We then returned to our vehicles and headed to Price where our motel rooms awaited us.

Our plan for Saturday was to ride some trails on top of the Cedar Mountains, but the weather was still chilly, so we opted to stay at lower elevation.  We started at the same trailhead and rode north to 332-335 (marked in blue).  We then followed the trails along the base of the Cedar Mountain cliffs and stopped at the Sun Stone Petroglyphs.  This is another fun family ride. 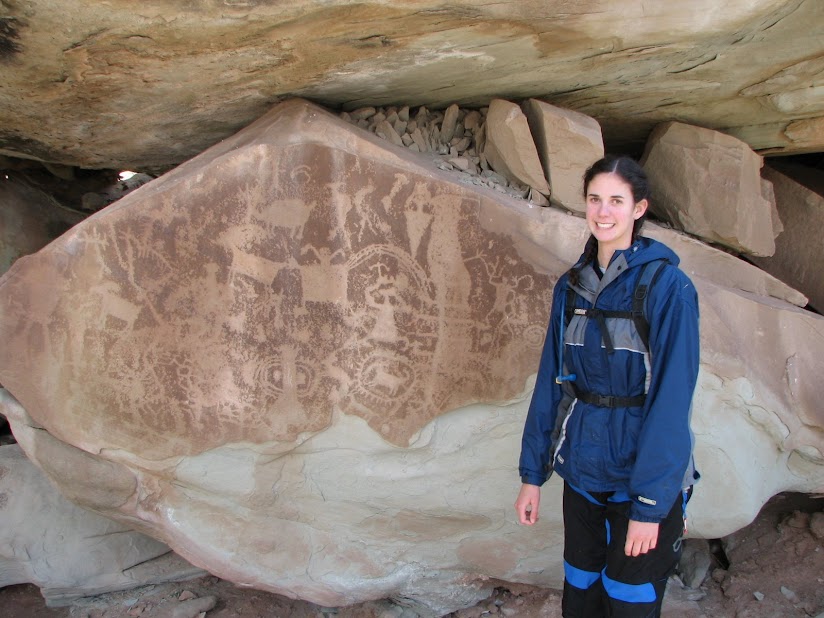 Jamie near a rock art panel

We intended to hunt for some geocaches and visit an old kiln, but the weather turned stormy again, so we pressed on.  It was too early to quit for the day, so we headed towards the Buckhorn Flat ATV trail system where we could find some shelter amongst the trees and have lunch.  The rain stopped about the time we got there, so we enjoyed a nice lunch break sitting on wet rocks.

After lunch we rode the western 1/3 of the ATV loop (marked in blue).  We rode this a few years ago, but this time we went clockwise instead of counter-clockwise.  It was a fun trail, with the exception of two nasty ledge crossings.  Matt got a little too far right going down the first ledge and caught his handlebar on a cedar branch.  This caused him to fall on the rocky slope (I think I got it on helmet camera).  He broke the branch off the tree – it was about 3” in diameter.  He was shaken a bit, but not seriously hurt.

A few hundred yards later we have to come back up the same shelf of rock, but further to the north.  It is a steep rocky climb with about a one-foot ledge to step up at the top.  This ledge just about gave Liz a heart attack as her front wheels lifted off the ground as she tried to climb the ledge.  This was the most challenging spot of the entire trip, and everyone made it safely.

We then visited the old Army munitions tunnel that was built in the 1950s.  The intent was to store ammunition under ground in case of a nuclear attack.  Most of the locals came out to watch the top-secret test to see if the tunnel would withstand a blast.  Unfortunately, the tunnel collapsed (hence the big whole in the ground) – so the project was abandoned.

Jason wanted to go down to the tunnel entrance, so I drove him down on Kim’s ATV.  With her low range 4WD it was much easier than it looked.

After church we drove most of the way up Nine Mile Canyon (which is about 40 miles long).  There are numerous pictographs and petroglyphs in this canyon.

This was a nice Sunday afternoon drive – especially since Jamie did most of the driving and I got to sit back and relax.

The weather forecast for Monday was not looking good – an even larger storm system was supposed to move in later in the day.  But the kids said they wanted to ride even if we get wet.  So we headed back to the Buckhorn Flat area to finish the rest of the ATV loop (shown in red).  Again we rode the loop the opposite direction from last time.  Note: The solid red line is my actual GPS route, while the dashed line is my route from the previous ride in the area.  My battery died during our lunch stop, so I didn’t get the rest of the ride recorded this time.

When we were here last time, Jason had just moved up from the xr70 to the ttr-125 – so this was his first challenging trail with a clutch.  He did quite well, but most of the younger kids struggled with these trails.  These are ATV trails as opposed to Jeep trails, so they tend to get deep ATV ruts on the turns.  The trail basically zigzags through the trees with numerous tight turns.  You have to keep ‘changing lanes’ to avoid whacking a tree.  This is kind of like crossing the wake while water skiing – it can be challenging – especially for the smaller bikes with small tires.

But this year things were different.  The kids have all improved so much in the past few years.  They ride faster and they have a lot more confidence.  The difference between the fastest rider and the slowest rider is very small.  We no longer spend minutes at a time waiting for the group to re-gather.

So, that meant we could cruise through these trees at a pretty good clip.  It was really fun!  It felt like we were in a cross country race, but we didn’t have to press our speed to win – we just cruised at a safe and fun pace.  This is the kind of trail that made me want a helmet camera – and I think I got some excellent footage.  I took about 1.5 hours of video on these trails.

We ended our ride early so we could get home at a decent hour.  Jason volunteered to power wash the motorcycles for me.  He was about half done when it started to pour.  This was by far the biggest rain of the trip.  Poor Jason was soaked head to toe – but he got the bikes clean!  It then cleared up so the bikes could dry before I oiled the chain and put them back in the shed.

All in all, it was an excellent trip.  The weather wasn’t the best, but we were well prepared for it.  It just adds to the excitement and helps make this a memorable vacation.