Posted on April 1, 2012 by gardinerfamilyadventures 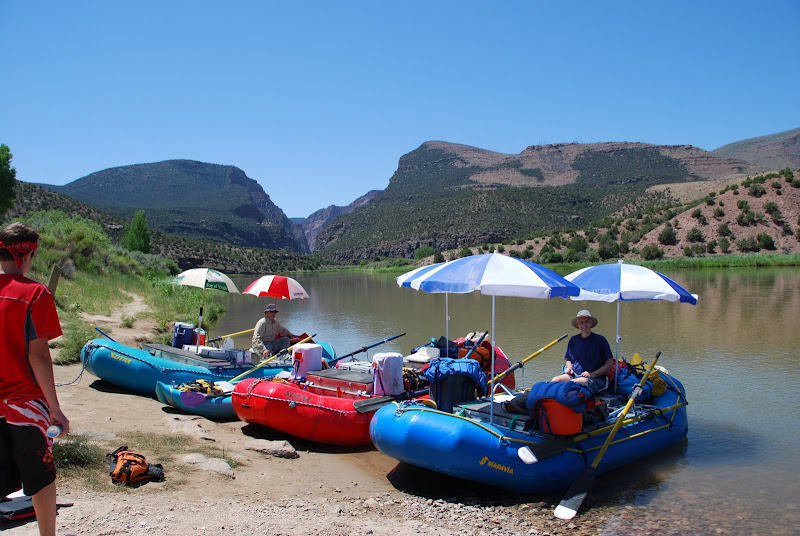 The Gates of Lodore 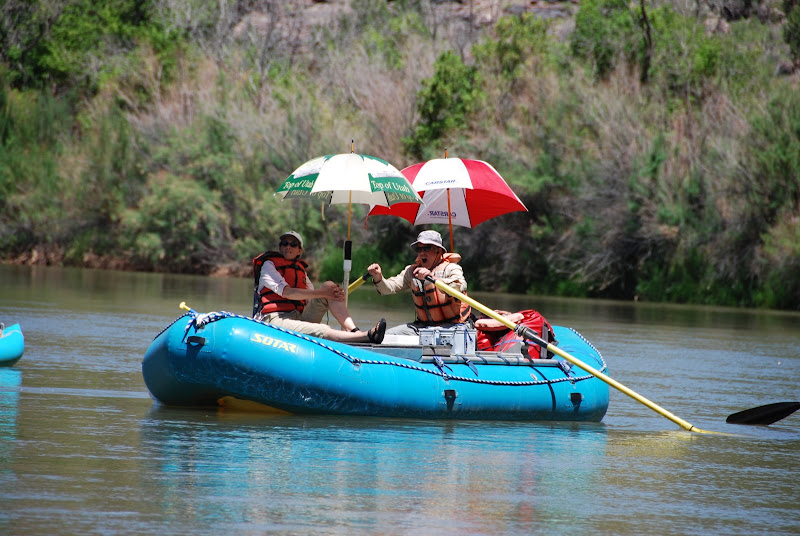 Barry and Karla after a very long day

Excellent!  Hot and sunny during the day, cool and clear at night.  Perfect temperatures both on and off the river.  Only occasional afternoon wind, but nothing too bad.

2 hours 45 minutes from Salt Lake to Rock Springs non-stop at 75 mph most of the way.  Another 1 hour 45 minutes to the put-in.  The road from Rock Springs to the Colorado border is paved.  It is dirt beyond that, but a nice road.

Shuttle by “River Runner’s Transport” out of Vernal.

We stayed in Rock Springs and drove to the put-in in the morning.  Barry drove the whole way that morning, leaving home about 5:00 AM.  We arrived at the put-in about 9:45 AM and launched at about noon.  An alternate strategy would be to camp at the free public campground in Irish Canyon.  It is about 20 miles from the put-in I would guess.  The campground has tables and a pit toilet, but no water.  It should be cooler and quieter than the put-in campground.

The drive home is about 3.5 hours not counting stops for dinner and gas. 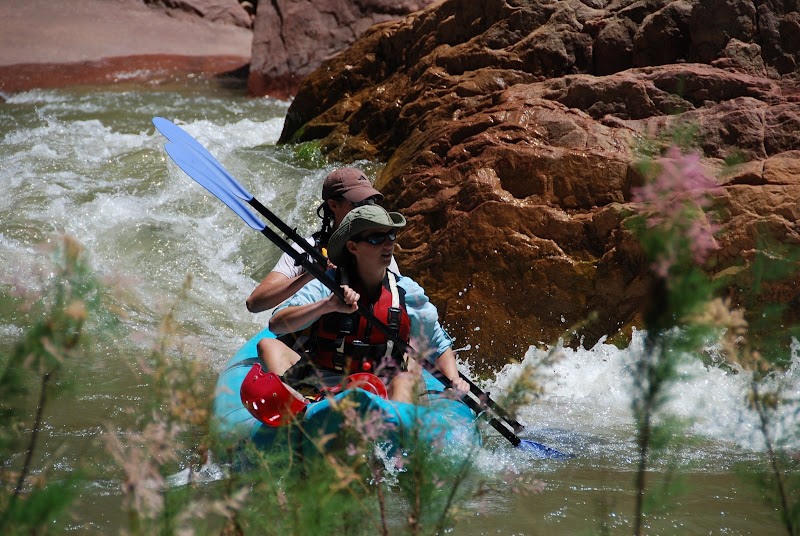 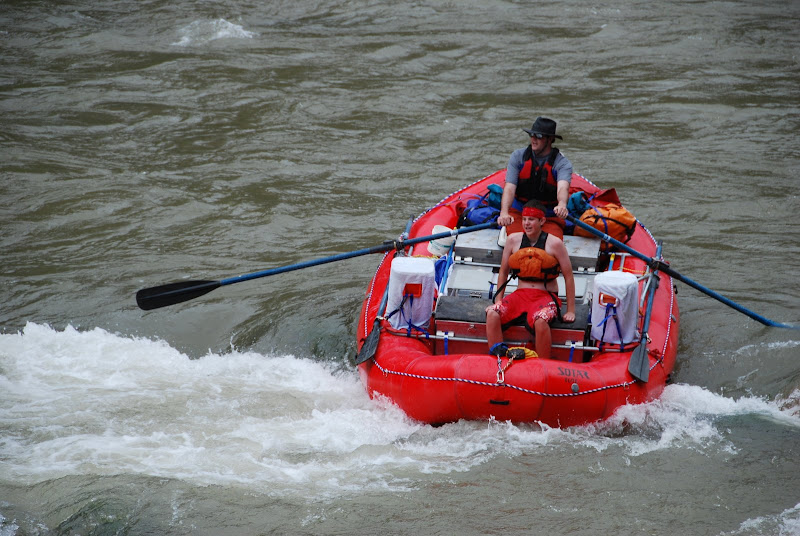 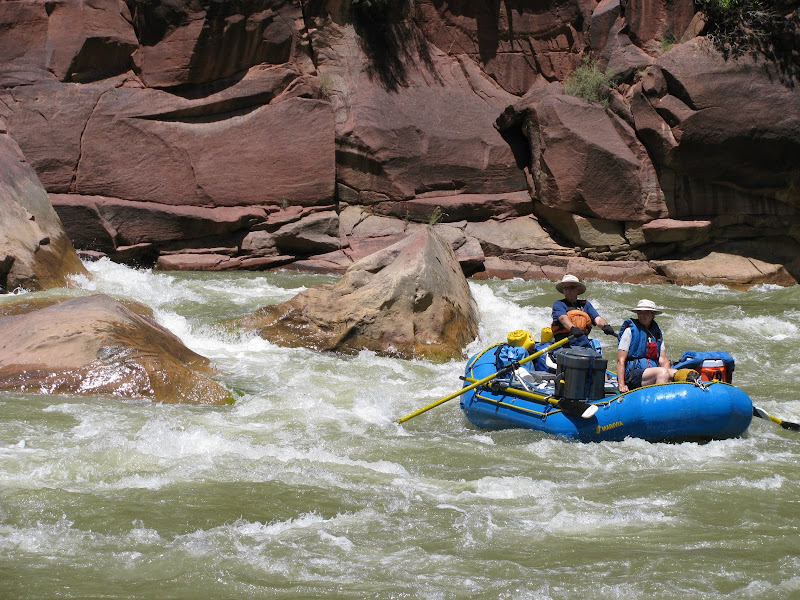 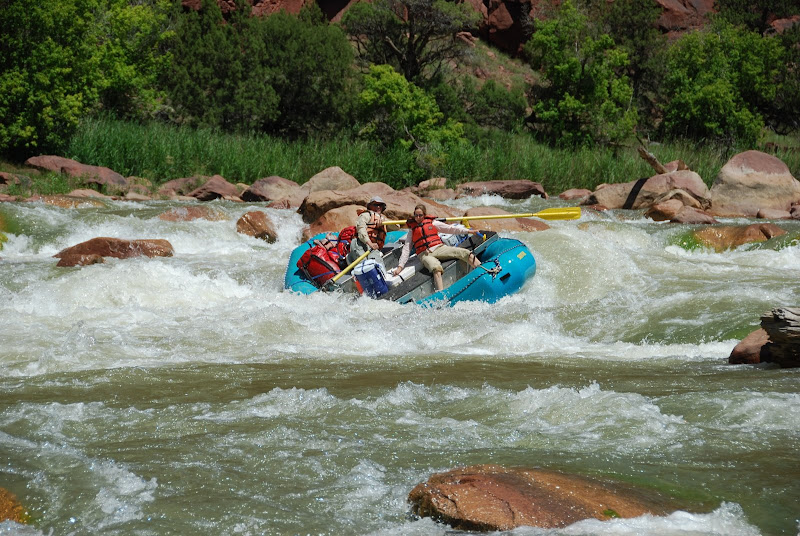 The standard run is to enter on the right side of the tongue, and then pull hard right immediately after passing the submerged rock on the edge of the tongue.  If you get over far enough, you can then ride the S-turn slot that changes your momentum to the left.  The S-turn slot is just right of Kevin.  He didn’t quite make it over, but he was able to go right of Lucifer’s Rock.  Barry also came up short and ended up going right over the top of the rock sideways for a scary ride.  Jamie & Hannah made the slot perfectly in the Ducky and were able to go left of Lucifer’s Rock. 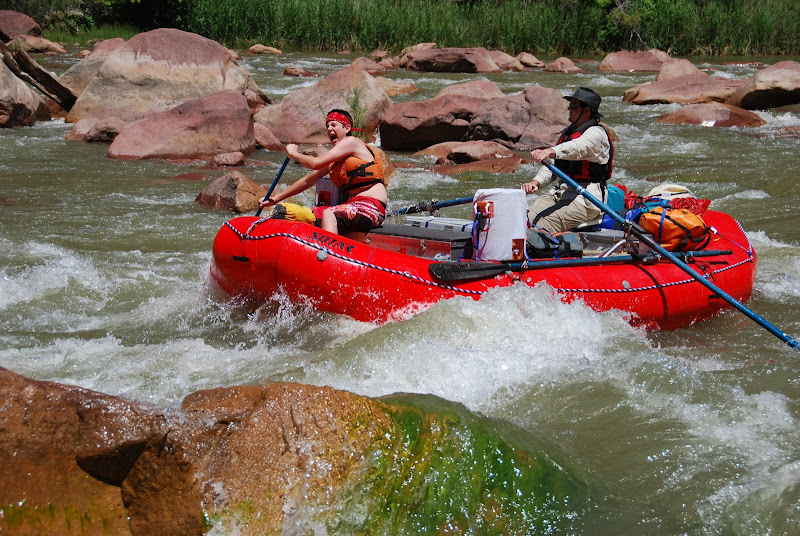 Jason enjoying Hell’s Half Mile, with Kevin at the oars

Dee changed strategies after watching Kevin and Barry attempt at going right.  He decided to punch through the hole just left of where Kevin hit it.  He was in a smaller 14’ boat and feared flipping in the hole, but there was a nice slot in the middle that allowed him to easily break through.  This put him in the calmer water and then easily went left of Lucifer’s Rock.

It was a wonderful trip this year.  The past 3 or 4 trips down Lodore Canyon were discouraging because the water was so low.  There were essentially no fun waves but many, many rocks to avoid.  At this higher flow, it was quite fun.  It was still fairly technical, but not unbearable.  The weather was perfect and the food and company was excellent.